Will Dr Haneef be a pawn in the whole terror scare on in Oz? Updates 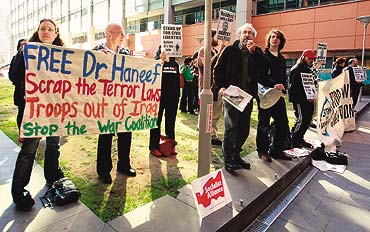 Once the newshounds in Australia were convinced about the seemingly weak case against terror suspect Mohammed Haneef, they began to speculate furiously on why Prime Minister John Howard's government was obstinately hung up on detaining the 27-year-old doctor from Bangalore. And they did have ample reason to look for ulterior motives—here was a man who was interrogated in detention for 14 harrowing days before being charged for "recklessly" supporting a terrorist group in the UK; someone who had been granted bail on rigorous conditions, including a surety bond of 10,000 Australian dollars. Even as these formalities were being completed, he found his immigration visa had been revoked, that he was to be held in Brisbane's high security prison—and that too in solitary confinement for 23 hours everyday—because he had been tagged as a "terrorist prisoner". So what the Brisbane magistrate's court found safe—that Dr Haneef could face trial while on bail—the government thought was extremely risky.

The Howard government's motive, according to conspiracy theorists, is age-old, one which has often inspired even Indian politicians to play sinister games. Yes, it's about the Howard government's determination to raise the spectre of a security threat to bolster its flagging position in the opinion polls prior to the national elections later this year. Howard's own past has imparted credibility to the theory. In August '01, his government refused to allow 433 people, picked up from a leaking boat by a Norwegian vessel, to land on the Australian mainland, insinuating that they may be potential terrorists and stoking fears of the country being swamped by foreign hordes. The issue was still in focus when 9/11 happened which gave a massive boost to the government's stand. Months later, Howard won the election.