How Will The Bulbs Glow?

We import 70% of our oil. N-energy is dormant. Solar power elusive. Where do we go? 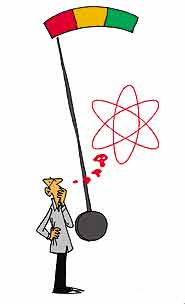 The Volckergate scandal about irregularities in the purchase of Iraqi oil is a mere sideshow in the far more serious issue of India's energy security. There is a new Great Game afoot in the geopolitics of oil, and India is a late entrant. Three issues came to the fore in 2005. First, nuclear power may be a chimera. Second, India needs to learn from the energy errors of others. Third, there is fierce competition, especially from China.

With the Oil Shock of 2005, it became clear that energy will constrain India's efforts to maintain a GDP of 7 per cent or more. Attempts to sew up oil and gas contracts have met with little success. An alternative effort was started for enriched uranium for conventional nuclear reactors. The July 18 Indo-US nuclear agreement was condemned immediately by experts. It is truly one-sided, for India commits its nuclear weapons programme to the old American mantra of 'cap, rollback and eliminate', in exchange for basically nothing. Americans will merely attempt to get the Nuclear Suppliers Group to sell India uranium.

This is suicidal. For, India is surrendering its nuclear weapons for a chimera of nuclear energy. Without advanced weapons systems, India faces serious threats, as has been repeatedly proved in times past. Besides, dangerous fission energy is no cure-all. Apart from deadly nuclear waste, there is also the fear that existing reactor designs used by the US are obsolete. Americans would in effect use Indians as guinea pigs for unproven, risky reactor designs.

The pursuit of uranium has also signaled that India is far from commercialising the prototype fast breeder reactor at Kalpakkam, near Chennai. This is a shame, because India holds 30% of all thorium, the fast-breeder fuel, in the world. What India really needs is renewable energy, especially solar—it's only logical, as it is blessed with sunshine. Crystalline silicon is expensive and has an energy efficiency of only 15%. New thin film and organic solar panel technology improves on both. With oil at $60 a barrel, solar power is competitive.

If India puts in place a high-profile, well-orchestrated programme, it is likely that ingenious inventors will make solar power viable. Solar energy will coexist with conventional power plants, especially for industrial uses, but it can take care of a lot of residential customers. Second, much of India's oil demand follows a well-trodden path, being fuelled by a burgeoning automobile industry. This is a vicious circle—demand for new roads, then for more oil as more consumers use those roads—ending up in a galloping import bill. India may be getting into a hydrocarbon crunch not to support industry but mostly to subsidise private transport.

There is an urgent need for policies that encourage rail and inland water transport, particularly for freight. A highway system is good for freight as well, but the hidden costs of subsidies for roads are high. The Delhi Metro has proved itself as a safe and attractive mode of transport; hopefully other cities will be encouraged to follow suit.

The third problem is competition from China, which has some advantages: they are better located for pipelines to Russia and Central Asia, don't have uncooperative neighbours like Pakistan and Bangladesh, and they can offer tempting nuclear weapons and missiles to rogue regimes. And they simply have more money, $700 billion in foreign reserves. China is the second and India the sixth biggest consumer of energy. China's oil imports grew by 33% last year, and India's by 11%. China imported a third of its oil requirements in 2004, and this will go up to 60% in 2006. India is already importing over 70% of its oil and this too will increase.

Thus the Chinese bid for Unocal, fended off by the Americans. China walked off with Petrokazakh in October, despite India's desperate diplomacy. Despite American apprehensions, India is pursuing ties with Iran, completing in early 2006 a $40-billion, 25-year deal on LNG from the largest gas field in the world. India also has a stake in the Sakhalin oil field in Russia, which started producing late in 2005. There are also stakes in places as far afield as the Sudan, Venezuela, Kazakhstan, and Myanmar.

But this doesn't add up to a strategy. Some bold questions need to be asked: what happens if there really are no new sources of hydrocarbons? Can we live with a drop in GDP growth? Can we afford to wait for solar energy or the fast breeder to become viable? The answers are not simple and the power struggle won't dry up soon.

Lenin In The Pink Of Health