How To Waive Crores Goodbye

UPA’s populist trumpcard of 2008—the farm loan waiver—has fallen short of its intended target, as a CAG audit throws up 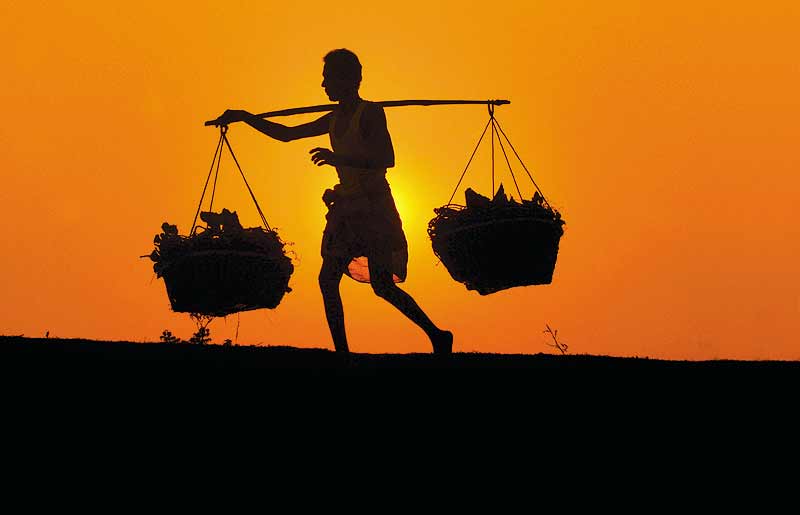 “Please stand up and be counted. Are you for the farmer or against the farmer?” Union finance minister P. Chidambaram had famously asked five years ago after unveiling the mammoth Rs 52,275-crore loan waiver scheme for small and marginal farmers to considerable applause and some criticism. There was no doubt in anyone’s mind that this was a smart political gesture on the eve of the 2009 elections. UPA president Sonia Gandhi had called it “revolutionary”; and Prime Minister Manmohan Singh had even written a letter to the intended beneficiaries in June 2008. A year later, the UPA was back in power, and this inclusive gesture to “unclog the lines of credit” and help farmers to get new loans was cited as a key reason.

Five years on, and within sight of another general election, an audit report which is being finalised by the Comptroller and Auditor General of India (CAG) has found gaping holes in the implementation of the scheme. A staggering number of farmers eligible for the waiver have not benefited, while ineligible farmers have got loan waivers thanks to tampering, overwriting and inadequate documentation. In some cases, it’s not the farmers who have got the loan waiver, microfinance institutions (MFIs) have taken it in their name. “We have no assurances whether these MFIs in turn wrote off the debts of the farmers,” senior CAG sources told Outlook.

The full magnitude of lapses will be known only after the CAG finalises and places the final report in Parliament during the budget session, starting in the third week of February. But if the draft CAG report submitted to the finance ministry late last year is any indication, the picture will not be pretty. With the opposition parties licking their chops in anticipation, this could be the last thing a scam-tainted UPA needs before the crucial budget session. “If such a well-intentioned programme to provide relief to those who would otherwise be driven to suicide failed to deliver, I would equate it with the rape of the public,” says M.S. Swaminathan, noted agriculture scientist and Rajya Sabha MP.

Apart from a recent report in the English news channel Headlines Today, the loan waiver audit has got scant attention in the media. According to official CAG sources, “The magnitude of the problem can be estimated by the fact that out of around 1 lakh accounts scrutinised in 800 bank branches, there were wrongdoings in as many as 20,000 accounts. It shows there was an absolute lack of monitoring and administration of this scheme.” 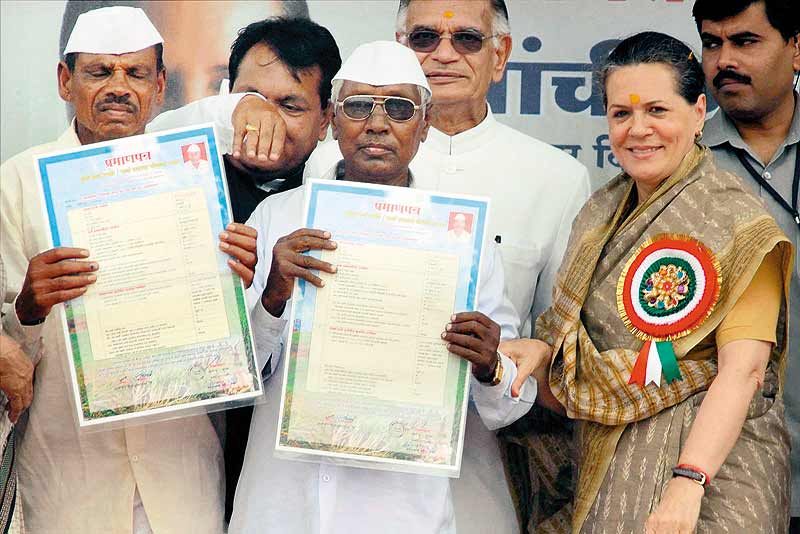 Sonia Gandhi hands over a no-dues certificate to a farmer in Loni village, Ahmednagar, 2008

No wonder the draft CAG report has set the cat among the pigeons, leading to a flurry of correspondence (which Outlook has seen) from the finance ministry to the RBI (which was supposed to monitor the implementation of the scheme through scheduled commercial banks) and the state-run NABARD or the National Bank for Agriculture and Rural Development (which was tasked with the overseeing and disbursing of funds to the rural banks and cooperatives).

“It seems to have been more a political announcement than any real attempt to help farmers.”
Murli Manohar Joshi, PAC chairman

Given that the CAG attracted criticism for quantifying the loss to the exchequer in the 2G spectrum case, the constitutional body seems chary of putting forth such a number in the loan waiver audit. A senior official clarifies that it is not possible to quantify such a loss as the number of accounts scrutinised is less than a lakh while the total beneficiaries are over 3.45 crore. “We can only talk about the sample size, not the entire scheme,” the official said. “If a substantial portion of the sample indicates lapses, that itself indicates a serious problem.”

The problem is that the size of the loans waived varies from a few thousand to a few lakh rupees. The loan waiver (which was operational for 30 days till June 30, 2008) had an upper limit of Rs 50,000 and was targeted at small and marginal farmers with up to five acres (2 ha) of land. Farmers with higher loans got partial relief under a debt relief scheme, operational for two years till June 30, 2010. This provided one-time relief of 25 per cent (or a maximum of Rs 20,000) loan write-off, provided the farmer paid the remainder by June 30, 2010.

However, the government has given an indication of the staggering numbers involved. D.K. Mittal, secretary, department of financial services, told Outlook that 8-10 per cent of the eligible people failed to benefit, which works out to around 34.5 lakh farmers. On the other hand, the ineligible farmers who got to avail the loan waiver benefit are estimated to form 6-7 per cent of the 3.45 crore universe, or about 24 lakh people, sharing the loot at the discretion of bank officials, middlemen and politicians. Since the lapses were brought to its notice by the CAG draft report, the finance ministry has initiated some action. “Banks have the capacity to recover the loan waiver given to ineligible people,” says Mittal, who retired on January 31.

“Not just public sector banks, even the pvt sector and cooperatives failed in implementing the scheme.”
D.K. Mittal, Secretary, Dept of Financial Services

Blaming the bank auditors for the lapses, Mittal said the guidelines were very clear. “If the bank auditors have failed, they need to be pulled up for not doing due diligence. It is not just the public sector banks but also the private sector and cooperatives that failed in implementing the scheme properly,” Mittal adds. A senior official of the Bank of Maharashtra revealed that, based on the CAG draft report, the RBI had written to individual banks to notify them of the accounts where discrepancies had been noticed. “We have already recovered dues from four accounts that were brought to our notice,” the official said.

This recovery process is opening up a Pandora’s box. For instance, around 49,000 farmers in the Kolhapur district of Maharashtra have been served notice in the last two months by the Kolhapur Cooperative District Bank for return of loans after nearly five years of being issued certificates of waiver. The notices were issued after several months of the cooperative bank trying to justify the loan waivers and debt relief to NABARD. Thousands of farmers and other beneficiaries under the two schemes across the country are similarly likely to be handed notices for return of loans despite their banks having issued them loan waiver certificates. 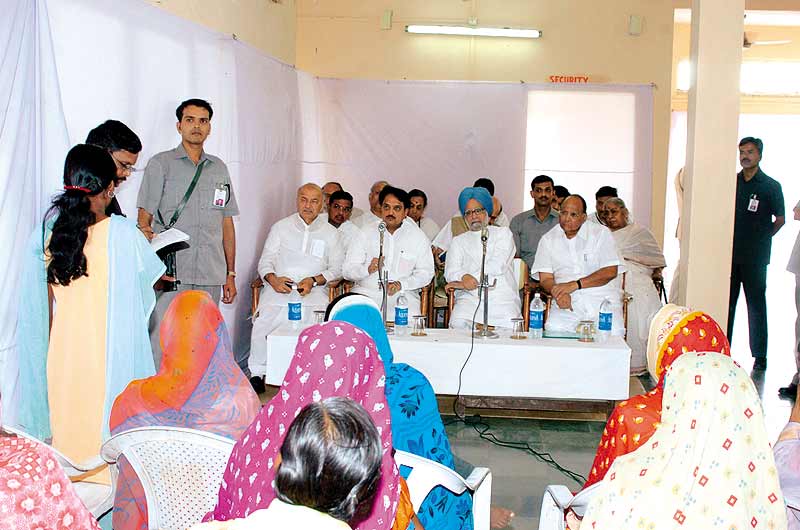 The PM interacting with debt-ridden farmers of Koljhari village, Maharashtra

Farm leaders are upset at the “high-handedness” of banks which have initiated the recovery process. They point out that the whole scheme was used by the government to win the 2009 Lok Sabha elections, and in the process provided the financial institutions a good opportunity to clear their bad debts. It also benefited non-farming individuals who had a record of not repaying their debts, while those who went to great effort to meet their loan repayment commitments—even to the extent of taking short-term loans from moneylenders at 5-6 per cent per month interest rates—were put at a disadvantage.

“If a well-intentioned programme as this failed to deliver, I’d equate it with the rape of the public.”
M.S. Swaminathan, Agriculture scientist and Rajya Sabha member

Raju Shetti, MP and founder of the Maharashtra-based Swabhimani Shetkari Sangathana, admits that banks and cooperatives often lend more than permissible limits to farmers with good repayment record. As for the loan waiver scheme, Shetti alleges that the guidelines left a lot of indebted farmers with a disadvantage, citing the case of farmers who had taken loans from urban cooperative banks with branches in the villages, but who were kept out of the scheme owing to the rules. “It was all a political game, that is why I had filed a complaint with the Election Commission in November 2012. I had also written to the prime minister to help poor farmers but still notices are being served to farmers for loan recovery,” Shetti says. He insists that a large number of farmers in Kolhapur district, who were issued copies of a letter with the prime minister’s signature of loan waiver ahead of the 2009 Lok Sabha elections, are now being asked to repay the loans after five years.

Despite cooperative banks having played an important role in banking in India, the segment has historically been plagued with issues of mismanagement and poor governance. Typically owned by members of prominent landowning families with political connections, directly or indirectly, these banks have often found themselves unable to meet capital adequacy norms and other regulatory requirements. Says Krishan Bir Choudhary, president of the Bharatiya Krishak Samaj, “It is the banks which are at fault.... In Maharashtra particularly, the cooperative banks have resorted to large-scale malpractices to recover and adjust loans of defaulters, even those who were not eligible.” 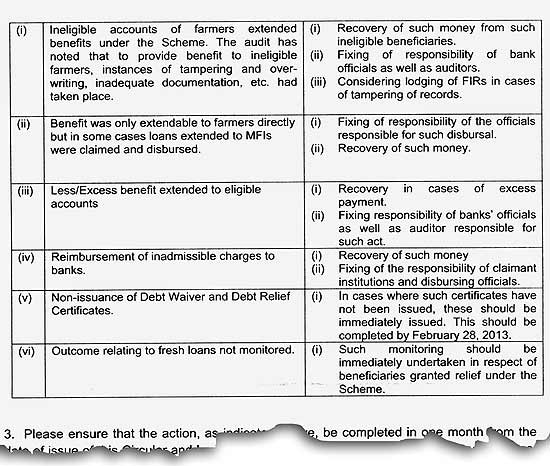 Consider Gajendra Ashtkar, a 30-year-old farmer eking out a living in the Sakhara village of Yavatmal district in Maharashtra’s Vidarbha region. He has been blacklisted by banks. His fault? His father committed suicide in 2010 after the repeated humiliation and mental stress of owing a debt of Rs 2.5 lakh—demonstrating how the loan waiver scheme failed to reach the needy. Today no bank is willing to extend any further loan to this sole breadwinner for the family. “Even the moneylenders are not willing to help us. I talked, begged to all possible officers, but no one listened to us. No one is ready to reconsider our case for loan-waiving,” says a desperate Ashtkar.

RLD’s Ajit Singh, a Jat leader and Union civil aviation minister, wonders aloud why such a major welfare and “life-saving” scheme for the farmers was not implemented properly. He attributes it in part to the fact that the central government schemes are implemented through the state governments sans any monitoring system or authorities to maintain checks and balances and follow up the implementation. “That’s the irony of our times. No one has taken the Swaminathan Commission’s report seriously; not a single discussion on it has taken place. Farmer-related issues are off-stage now,” says the farm leader.

The minister’s lament that nobody cares about farmers is borne out by the CAG findings. It’s ironical that the UPA itself couldn’t guarantee the farmer’s rights for a scheme that it brought to the table, and not too long ago. Swaminathan, for one, is optimistic that the government will initiate action once the final CAG report is placed in Parliament. It would serve civil society well if the banks and the monitoring panel set up to oversee the scheme take a hard relook at their books and systems. Particularly at a time when another mega vote-garnering scheme, the direct cash transfer, is being rolled out.

By Lola Nayar and Panini Anand

The print version of this story erroneously says "An audit of 1,00,000 cases in 800 bank accounts reveals holes in implementation and monitoring of scheme." This has been corrected above to 800 bank branches.