How To Swap A Partner 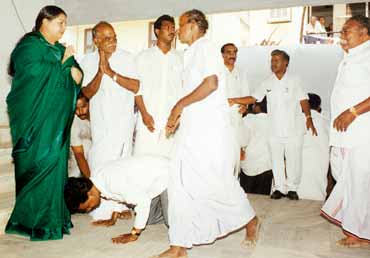 outlookindia.com
-0001-11-30T00:00:00+0553
When the Pattali Makkal Katchi (PMK) joined the aiadmk camp, political pundits pulled out their calculators and—based on the votes polled by the respective parties in the 1996 elections—read an arithmetic advantage to the aiadmk-led front. By their account, Jayalalitha is on a high and the comeback trail. The assumption was that the Congress and the Tamil Maanila Congress (tmc) would come to terms with the pmk, as the third front was seen as a non-viable option. But within a week, the situation has changed dramatically. Now it appears that the tmc and the Congress are veering towards forming a new front, independent of the aiadmk.

More than the pmk's extreme ideology, one source of considerable apprehension in the Congress and the tmc is a secret deal between the aiadmk and the bjp. With one of the Sangh's favourite journalists and Rajya Sabha MP, Cho Ramaswamy, emerging as Jayalalitha's key advisor, these parties are unwilling to accept her secular credentials at face value. "Jayalalitha was the only leader to defend the kar seva and we have not forgotten it," says a senior tmc leader.

Cho's switching of sides is linked to the fact that the dmk's relationship with various parivar outfits is souring by the day. The government's decision to ban the Vinayagar chaturthi procession organised by the Hindu Munnani through predominantly Muslim-populated areas resulted in the parivar's open call to defeat the "anti-Hindu" dmk. As of now, the dmk equation with the bjp is uncomfortable and the Congress still seems to have reservations about aligning with it. Meanwhile, in an obvious move to please the parivar and establish her Hindu credentials, Jayalalitha is on a pilgrimage spree.

The public acceptance by senior bjp leader and Union rural development minister M. Venkaiah Naidu in Chennai of the fact that pmk leader Dr S. Ramdoss made efforts to bring aiadmk into the nda fold has only fuelled doubts about Jayalalitha. According to insiders, the bjp state unit and the parivar is actively considering replacing the dmk with the aiadmk as alliance partner. According to aiadmk sources, a senior parivar leader had articulated the bjp's flexible position on striking new alliances.

His point was that the bjp is ready to truck only with the winner. That it had no problem in ditching Lakshmi Parvathi for Chandrababu Naidu; dumping Bansi Lal's hvp to join hands with Chautala; its willingness to dump the Sena for the ncp in Maharashtra. One school of thought in the parivar is that if the dmk leaves the nda over the Ram temple issue, which is bound to flare up in the prelude to the UP polls, the aiadmk and the pmk could compensate the loss. The dmk's present strength in the Lok Sabha is 12 while the aiadmk has 11 members.

Venkaiah Naidu described as "baseless" reports that the bjp might shift to the aiadmk front and asserted it would continue to be in the dmk alliance. But sources close to Moopanar are aware of some of the developments. They point to the letter Ramdoss wrote to Vajpayee in which he mentioned that "though I am leaving the nda with a heavy heart, let me make it clear that we will not cause your government's downfall. In any hour of crisis in Parliament, we will vote for you". The tmc is wondering how then a front could be deemed secular.

The Congress seems to be a chastened party now in its relations with the aiadmk. Sonia Gandhi, addressing a farmers' rally in Myladuthurai on February 17, decided not to touch Chennai but to reach the venue directly from Bangalore and thus avoid a meeting with Jayalalitha. Meanwhile, Moopanar has deputed party MP Jayanthi Natarajan to meet her on evolving alternative strategies.

Considerable political churning is expected before the battlelines become clear in Tamil Nadu. But for now Jayalalitha is in a position she always enjoys being in. The bjp and the parivar are wooing her while the dmk is considering alternative strategies. There is some talk of it tying up with the tmc, which is trying to win Sonia over to a three-party alliance. But the Congress is sceptical about joining any formation which has the dmk. Much depends now on Moopanar and senior party leaders like P. Chidambaram are pushing him to call it quits with Jayalalitha. Await the next move.