How To Live & Die 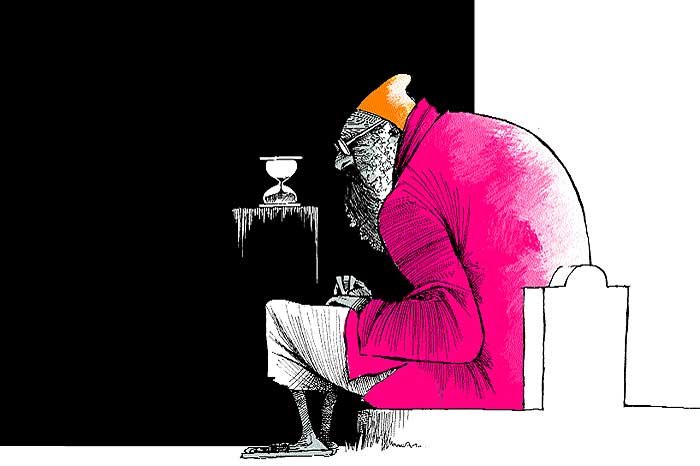 Death is rarely spoken about in our homes. I wonder why. Especially when each one of us knows that death has to come, has to strike. It’s inevitable. This line from Yas Yagana Changezi says it best: Khuda mein shak ho to ho, maut mein nahin koi shak (You may or may not doubt the existence of God, you can’t doubt the certainty of death). And one must prepare oneself to face it.

At 95, I do think of death. I think of death very often but I don’t lose sleep over it. I think of those gone; keep wondering where they are. Where have they gone? Where will they be? I don’t know the answers: where you go, what happens next. To quote Omar Khayyam,

“Into this Universe, and Why not knowing
Nor Whence, like Water willy-nilly flowing...”

“There was a Door to which I found no Key
There was a Veil through which I could not see
Some little Talk awhile of Me and Thee
There seemed—and then no more of Thee and Me.”

I once asked the Dalai Lama how one should face death and he had advised meditation. I’m not scared of death; I do not fear it. Death is inevitable. While I have thought about it a lot, I don’t brood about it. I’m prepared for it. As Asadullah Khan Ghalib has so aptly put it,

(Age travels at galloping pace; who knows where it will stop
We do not have the reins in our hands nor our feet in the stirrups).”

All my contemporaries—whether here or in England or in Pakistan—they’re all gone. I don’t know where I’ll be in a year or two. I don’t fear death. What I dread is the day I go blind or am incapacitated because of old age—that’s what I fear—I’d rather die than live in that condition. I’m a burden enough on my daughter Mala and don’t want to be an extra burden on her.

All that I hope for is that when death comes to me, it comes swiftly, without much pain, like fading away in sound slumber. Till then I’ll keep working and living each day as it comes. There’s so much left to do. I have to content myself by saying these lines of Iqbal:

(Why did you order me out of the garden of paradise? I have a lot left to do; now you wait for me).”

So I often tell Bade Mian, as I refer to him, from time to time, that he’s got to wait for me as I still have work to complete.

I believe in these lines of Tennyson:

I believe in the Jain philosophy that death ought to be celebrated. Earlier, whenever I was upset or low, I used to go to the cremation grounds. It has a cleansing effect, and worked like a therapy for me. In fact, I’d written my own epitaph years ago:

“Here lies one who spared neither man nor God
Waste not your tears on him, he was a sod
Writing nasty things he regarded as great fun
Thank the Lord he is dead, this son of a gun.”

I hope that when death comes to me, it comes swiftly, without much pain, like fading away in sound slumber.

I had even written my own obit in 1943 when I was still in my twenties. It later appeared in a collection of short stories, titled ‘Posthumous’. In the piece, I had imagined The Tribune announcing the news of my death on its front page with a small photograph. The headline would read: ‘Sardar Khushwant Singh Dead’. And then, in somewhat smaller print:

‘We regret to announce the sudden death of Sardar Khushwant Singh at 6 pm last evening. He leaves behind a young widow, two infant children and a large number of friends and admirers. Amongst those who called at the late sardar’s residence were the PA to the chief justice, several ministers, and judges of the high court.’

I had to cope with death when I lost my wife. Being an agnostic, I could not find solace in religious rituals. Being essentially a loner, I discouraged friends and relatives from coming to condole with me. I spent the first night alone sitting in my chair in the dark. At times, I broke down, but soon recovered my composure. A couple of days later, I resumed my usual routine, working from dawn to dusk. That took my mind off the stark reality of having to live alone in an empty home for the rest of my days. When friends persisted in calling and upsetting my equilibrium, I packed myself off to Goa to be by myself.

I used to be keen on a burial because with a burial you give back to the earth what you have taken. Now, it will be the electric crematorium. I had requested the management of the Bahai faith if I could be buried. Initially, they had agreed, but then they came up with all sorts of conditions and rules. I had wanted to be buried in one corner with just a peepal tree next to my grave. After okaying this, the management later said that that wouldn’t be possible and that my grave would be in the middle of a row and not in a corner. I wasn’t okay with that—even though I know that once you are dead it makes no difference. But I was keen to be buried in one corner. They also told me later that they would chant some prayers, which again I couldn’t agree with, because I don’t believe in religion or in religious rituals of any kind.

Though I’m quite fit, I know I don’t have much time left. I’m coming to terms with death, preparing myself. And since I have no faith in God, nor in the day of judgement, nor in the theory of reincarnation, I have to come to terms with the complete full stop. I have been criticised for not sparing even the dead, but then death does not sanctify a person, and if I find the person had been corrupt, I write about it even when he’s gone.

I don’t believe in rebirth or in reincarnation, in the day of judgement or in heaven or hell. I accept the finality of death. We do not know what happens to us after we die but one should help a person go in peace—at peace with himself and with the world.

I’ve lived a reasonably contented life. I’ve often thought about what it is that makes people happy—what one has to do in order to achieve happiness.

First and foremost is good health. If you do not enjoy good health, you can never be happy. Any ailment, however trivial, will deduct something from your happiness.

Second, a healthy bank balance. It need not run into crores, but it should be enough to provide for comforts, and there should be something to spare for recreation—eating out, going to the movies, travel and holidays in the hills or by the sea. Shortage of money can be demoralising. Living on credit or borrowing is demeaning and lowers one in one’s own eyes.

Third, your own home. Rented places can never give you the comfort or security of a home that is yours for keeps. If it has garden space, all the better. Plant your own trees and flowers, see them grow and blossom, and cultivate a sense of kinship with them.

Fourth, an understanding companion, be it your spouse or a friend. If you have too many misunderstandings, it robs you of your peace of mind. It is better to be divorced than to be quarrelling all the time.

Fifth, stop envying those who have done better than you in life—risen higher, made more money, or earned more fame. Envy can be corroding; avoid comparing yourself with others.

Sixth, do not allow people to descend on you for gup-shup. By the time you get rid of them, you will feel exhausted and poisoned by their gossip-mongering.

Since I have no faith in God, nor in the day of judgement, nor in reincarnation, I have to come to terms with the complete full stop.

Seventh, cultivate a hobby or two that will fulfil you—gardening, reading, writing, painting, playing or listening to music. Going to clubs or parties to get free drinks, or to meet celebrities, is a criminal waste of time. It’s important to concentrate on something that keeps you occupied meaningfully. I have family members and friends who spend their entire day caring for stray dogs, giving them food and medicines. There are others who run mobile clinics, treating sick people and animals free of charge.

Eighth, every morning and evening devote 15 minutes to introspection. In the mornings, 10 minutes should be spent in keeping the mind absolutely still, and five listing the things you have to do that day. In the evenings, five minutes should be set aside to keep the mind still and 10 to go over the tasks you had intended to do.

Ninth, don’t lose your temper. Try not to be short-tempered, or vengeful. Even when a friend has been rude, just move on.

Above all, when the time comes to go, one should go like a man without any regret or grievance against anyone.  Iqbal said it beautifully in a couplet in Persian: “You ask me about the signs of a man of faith? When death comes to him, he has a smile on his lips.”

(Excerpted from the forthcoming Absolute Khushwant: The Low-Down on Life, Death & Most Things In-Between (Penguin). The book will be launched on August 16.)