How Thick Is Blood?

No honour in this. The Centre treads softly on reining in the killer khaps. 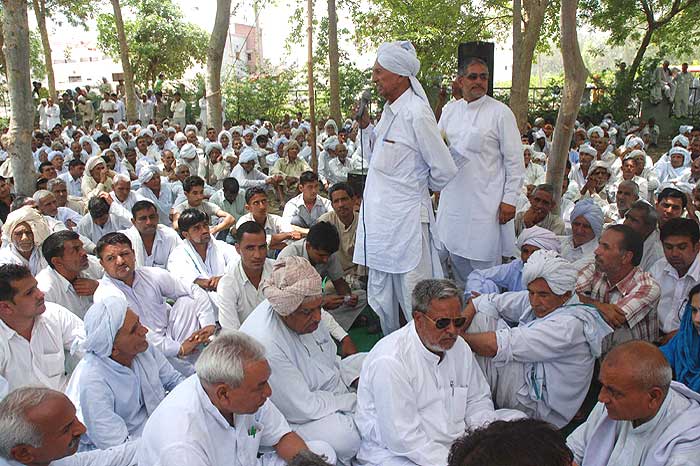 They were supposed to be a cocktail of tradition and modernity. Indeed, when they were first elected to the Lok Sabha six years ago, the young turks from the old pocketboroughs of Haryana, Rajasthan and western UP almost seemed a breath of fresh air. Of course, they came from the entrenched political families of the hinterland, but they came armed with fancy degrees from US varsities like Wharton and Indiana and there was this expectation that the new government would benefit from their progressive educational backgrounds and youth. But in khap country, it all seems so much surface veneer now, as tales of the brutal honour killings that have hounded our front pages these last few months have shown.

Honour killings come out of the belief that individual choices in marriage are proscribed by tradition and hence a violation must be avenged. The rash of incidents in the recent past where young couples have been butchered, shot dead and strung up on trees for defying a vague tradition has shocked the nation. Surely it should have elicited a strong reaction from our young, urbane parliamentarians. But did they take a stand, condemn these primitive acts? Their degrees notwithstanding, the young MPs have either supported the khaps or maintained a stoic silence on the issue

So you have a Deepender Hooda, MP and son of the powerful Haryana CM B.S. Hooda ducking questions even as his father publicly defended the khap panchayat kangaroo courts saying they represented “informal social organisations like ngos”, and anyway girls and boys of the same gotra had no business falling in love, let alone getting married. Another MP, industrialist and Page-3 celeb Naveen Jindal burnt his fingers after he defended the khaps on national TV saying traditions cannot be trifled with (though he condemned the killings).

Their words have since found an echo in the cabinet too. Last week, when it met to take stock of home ministry-suggested amendments to the Indian Penal Code—mostly in the nature of holding the community responsible for honour killings—the ministers were divided. Senior ones like Kamal Nath, Kapil Sibal and M.S. Gill cautioned others on the need to tread carefully as this was not a legal issue only but one that dealt with tradition. Incidentally, most cases of honour killings have come from the Jat/Gujjar belt—they constitute a formidable front and can tip the fortunes of any political party. So what the ministers were actually saying was: don’t rock the boat. As luck would have it, the matter was referred to a Group of Ministers—from where it is unlikely that a decision will emerge anytime in the near future.

But what did the ministers actually say? Well, hrd minister Kapil Sibal expressed doubts on the amendments proposed by the home ministry as he did not see them solving the problem. His point, say sources, was that the khaps in themselves were not delivering the death sentence but in censuring the marriages, only creating conditions for families to disassociate themselves from the young couple. So, to strike at the problem, would it be in the fitness of things to charge the entire khap for abetment to murder? However, he admitted, after the murders, khap panchayats are known to extol the virtues of a family that had avenged its honour, which should count as an offence. Clearly, no clear solutions were coming on this front.

Sibal was quickly joined by M.S. Gill who said that states with a sizeable population of Jats and Gujjars must be consulted before a decision was arrived at. Also, as the issue was linked to tradition, it required more than just a legal solution. Gill said that laws should be simplified so that matters could be dealt with at the local police level.

While Gill seemed to hint at a community backlash if hasty steps were taken to rein in the khaps, Kamal Nath cautioned  colleagues on the need for clear laws on the subject. He said it was for the home ministry to take the steps required to check the killings. “There is no way one cannot condemn the killings,” he said.

The rumblings within the cabinet has left academic Prem Chowdhry, a Jat herself, deeply worried. She feels the cabinet has betrayed the sentiments of all women by not acting. She says the khaps are part of a society where individuals take action on the basis of an ideology that the khap exhorts people to follow. “The khaps claim they are the supreme constitution...so they can actually give an order to stop the killings. They haven’t said a word to either condemn the act or criticise any family that has killed in the name of honour.”

Within the community, Prem’s views, of course, are in a minority. Ghatwala khap (in neighbouring Haryana) head Baljit Singh Mallik says allowing such marriages means saying yes to incest. Mallik and his ilk are going to descend on the prime minister’s house on July 21 to press upon him the importance of amending the Hindu Marriage Act, 1955, to include a proviso—a ban on same-gotra marriages. Mallik even goes on to suggest that the Constitution is also an expression of traditions and customs and must reflect that! He goes quiet though when asked why khap panchayats have not condemned the killings or issued orders to stop them, instead of valorising family members.

So it’s a dead end. The killings are expected to continue for young love, same-gotra marriages certainly won’t be stopped by legislation or social bullying. And till the GoM takes a call, the government won’t bring in a law that gives couples protection and reins in the khaps.