How The Southern Portal Crashed 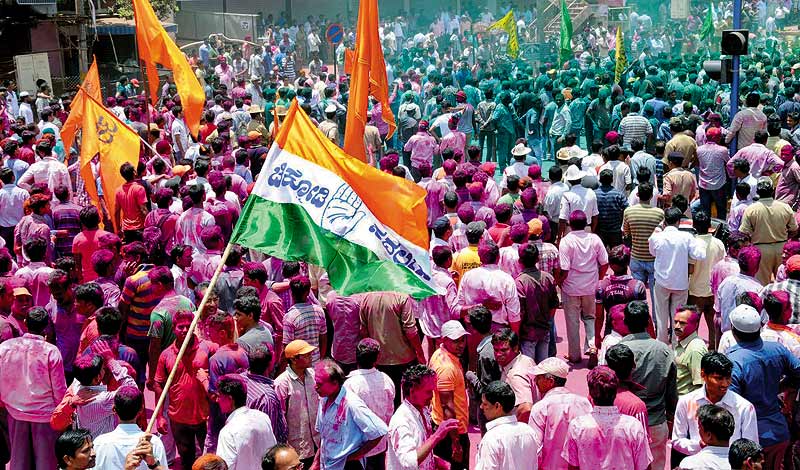 What went against the BJP

In the circular logic of politics, it’s apt that the election results in Karnataka generate a meaning that goes beyond immediate victors and losers, and has a relevance not limited to the state’s borders or political culture. The grizzled players of the state Congress, instead of losing themselves in celebrations, are eking out a moral from the story and holding it up for the big bosses in New Delhi to see. It’s a nervous message: corruption is bad politics.

What’s behind this curious note of caution tempering the elation and relief at returning to power in Karnataka after a gap of seven years? The survival inst­inct, pure and simple—and an honest app­raisal of events as they evolved over the last few years. What lost the BJP its precious ‘gateway to the south’? There may be no answer as grand as the question. Yes, maybe a ‘correction’ to a rightward lurch in the polity, a bit of saffron fatigue. But equally, an accumulated frustration with the simple, everyday facts of massive institutional corruption. Dovet­ailed with visible misgovernance. 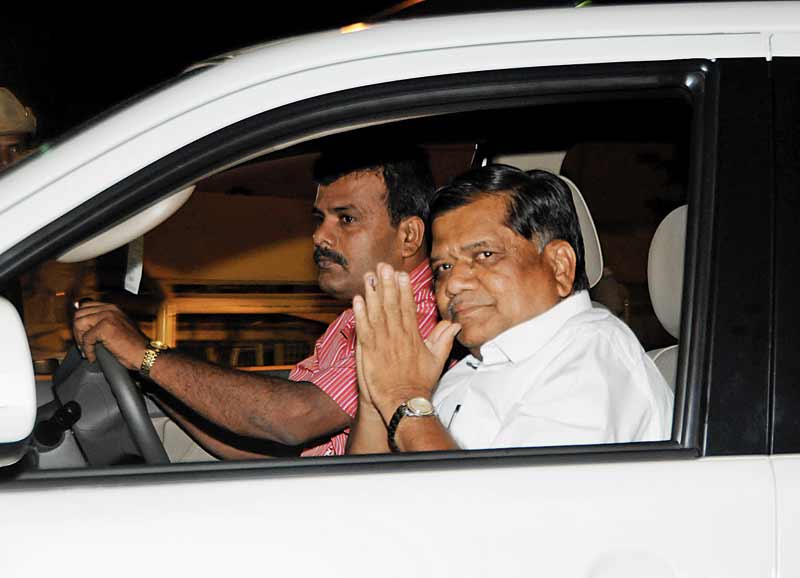 Jagadish Shettar after putting in his papers, May 8

The way Congressmen tie the narrative to the present situation at the Centre—with the UPA unwilling to let go of two ‘tainted’ ministers for even form’s sake—has a lot to do with how things unfolded in Karnataka. For, whatever gains the Congress secured in this election owes to what the BJP did during its five-year rule. More than the scams, it’s in being totally impervious to public opinion that the real damage came. A feeling had set in at some point that the party cared little about public perception.

The BJP’s innings started with the party changing its outlook to power, Operation Kamala being the best example of this.

Which hopefully will not be the mistake the Karnataka Congress will make. Or will it? Things have started off with the usual sounds of tug and pull, with over half a dozen candidates announcing they had a hat in the ring for the top job. Opposition leader in the outgoing assembly and padayatra man Siddara­m­aiah and Union labour minister M. Mal­likar­j­una Kharge headed the list of pro­­spect­ive CMs as we went to press; other major names in the air inc­luded Union oil min­ister Veerappa Moily and ex-KPCC chief R.V. Des­hpande. That said, matters are unlikely to come to a head, all players agreeing amicably that “everybody will abide by the high command decision”. 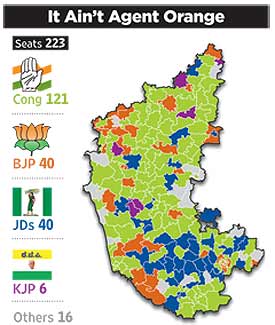 The same cannot be said for the BJP’s innings that just came to an end: it had star­ted by changing its very outlook to power. Its innovative ‘Operation Kamala’, to wean away Congress and Janata Dal leg­islators who later got elected as BJP men, was a classic example of how demo­cracy can be subverted. It was as if, with opportunity knocking by way of its 100 seats—two short of the halfway mark of 112 in the assembly—it would brook no obstacle in the bid to grab and hold on to power. The lack of trust was obvious—it neither trusted the independents (whose support gave it a simple majority) nor its own partymen. Unlike the late Janata leader Ramakrishna Hegde, who was caught in a similar situation in 1983 but went on to provide a good government, the state BJP was just not prepared to make good on its first chance.

To be sure, there was a dichotomy from the beginning between the principles enu­nciated by the party’s tallest leader then, L.K. Advani, at the time of the 2008 campaign (“Give us a chance to provide a clean government”) and the mechani­sms the BJP found handy to gain power. The Bellary iron ore mines had pretty much financed the whole campaign, and Operation Kamala to boot. There was going to be a payback time. B.S. Yedi­yu­rappa finally lost his hold on the sceptre by trying to manage the tensions inherent in the BJP’s deal with the Reddys. 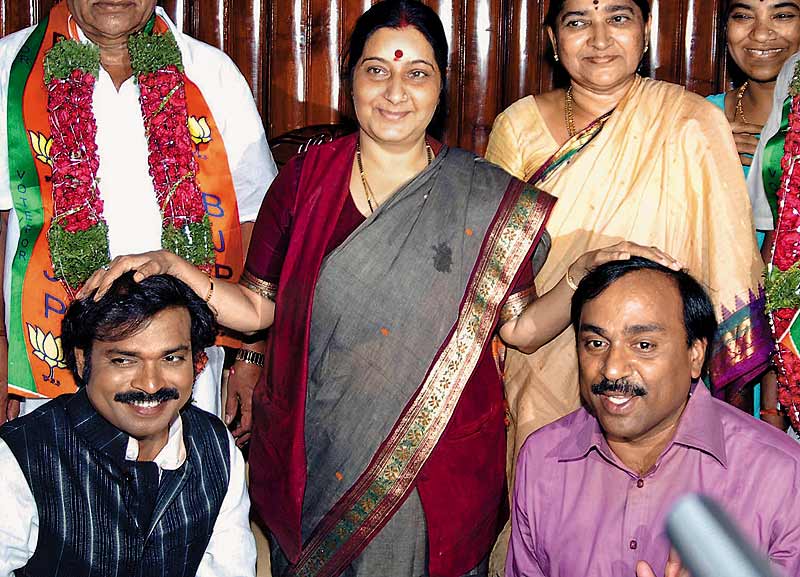 Sushma Swaraj with the Reddy brothers. (Photograph by KPN)

And then there was also the humbler corruption of those who were tasting power for the first time. Take the land deals, well exposed by H.D. Kumaras­w­amy of the JD(S). At one point, the ex-CM was pulling out one scam a day for almost a fortnight. Each of the deals were violative of all norms, including high court verdicts, and related to acquisition of land for BSY’s family members, or whoever found favour with the CM.

The Bellary ore mines had pretty much financed the whole campaign...there was going to be a payback time.

By then, it was obvious that Yedi­yurappa considered himself a law unto his own. For, after all, hadn’t he led the BJP to power almost single-handedly, as he claimed to a senior party leader trying to reason with him on behalf of his collea­gues. Indeed, the BJP’s rise to power was entirely due to his caste base: the large, dominant community of Lingayats who had stood by him. But then hubris struck. He became so brazen that even standard practices his predecessors followed—like not ignoring a bureaucrat’s written note quoting high court rulings—was given the go-by. The man even denotified land on a site lawfully allotted to his law minister!

The situation had clearly changed dramatically for the man who grew up in the RSS shakhas of Mandya. The time had come to unlearn the moral and cultural codes that had been drilled into him in the shakhas. The new mantra was RoI (return on investment). It’s what the Reddy brothers wanted. Yeddy went the whole hog: from land deals to mining; to backing the transfer of an honest forest official probing the theft of eight lakh tonnes of illegally mined ore the department had seized and retained at Belekere port; to the family’s Prerana Education Trust getting Rs 20 crore donations from the South West Mining Co and getting exposed by an active Lokayukta,  Justice Santosh Hegde. 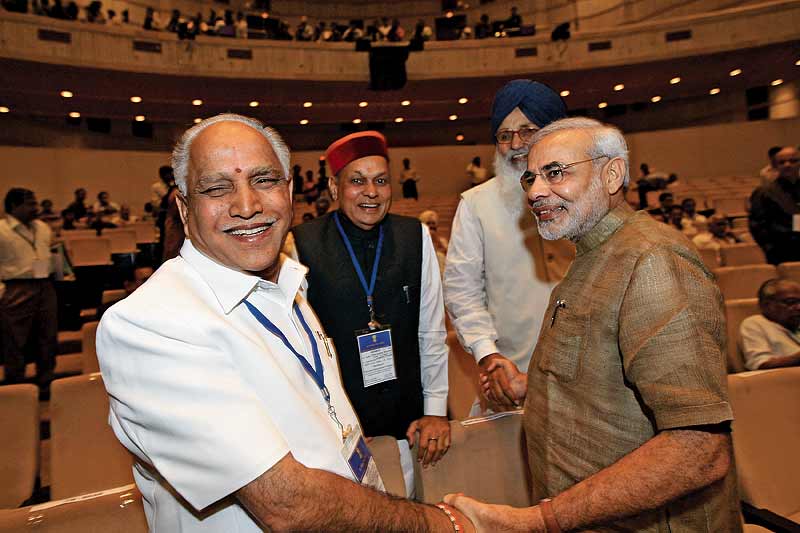 And when the mining scam hit the ceiling, Yediyurappa punctured the party’s high command balloon further by walking in a procession to the Raj Bhavan to submit his resignation. It was also to send a message: that he alone mattered in the BJP and if it didn’t care, he would teach it a lesson. The high command, bent on protecting its ‘gateway to the south’, boosted his stature by caving in yet again. Why didn’t the party sack him then? Was it the fear of losing Lin­gayat support, as had happe­ned to the Congress when community strongman Veeren­dra Patil was remo­ved by Rajiv Gandhi in 1990? (It’s said that they never forgave the Congress—until now.) Whatever it was, BSY succe­ssfully converted every single crisis —even his three weeks’ stint in jail in the mining scam, the first ex-CM to do time—into an opportunity.

They’d go to any lengths to appease him because the route to power was the Lingayat vote. It was all the party cared for.

He succeeded in bullying the high command—despite the presence there of actively malevolent elements—into cha­n­ging rebellious CMs who were originally his choices. Sadananda Gowda and Jagadish Shettar were asked to toe his line. When they didn’t, Yeddy packed off his group of 60-70 MLAs to a resort. All this happened when the state was facing its worst ever drought in a decade. The man who grew as a leader of the farming community did not flinch once during this period at their plight. Worse, even the party high command did not think of the consequences. They would go to any lengths to appease him, because the route to power was the Lingayat vote and that was all that mattered to the party.

It was not as if the rest of the ride was smooth. There were many ministers who fell by the wayside, rape charges, cheating charges, a medical education department recruitment scam, the stream of BSY’s close associates appearing one by one before the Lokayukta court on some charge or the other. His close associate, Shobha Karandlaje, also had to be dropped after dissident activity and because she was riding rough- shod over colleagues. Meanwhile, BJP MLAs were getting caught watching pornography in the assembly. Social harmony had become a bad word in the state lexicon. Church attacks, pub attacks, the state was in turmoil. 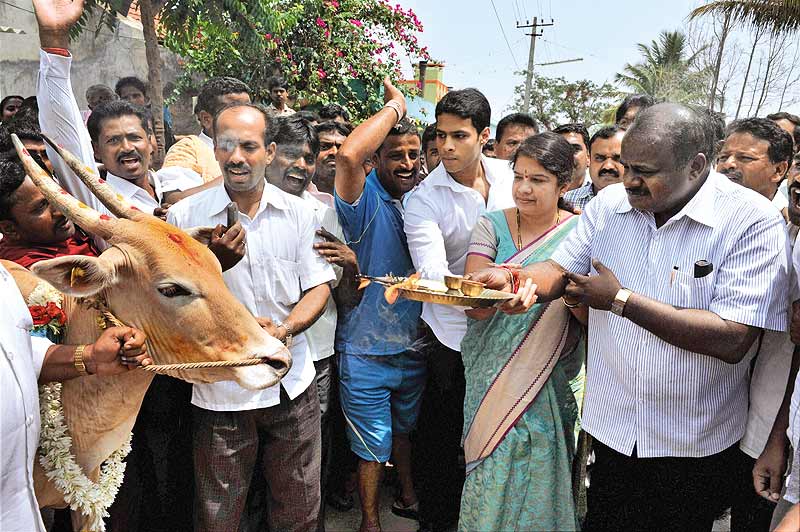 Mooo... Kumaraswamy and family offer prayers before casting their vote in Ramnagar

It was, again, a lack of trust that finally pushed him out of the party to launch the Karnataka Janata Paksha (KJP). Loyalty was difficult under the circumstances:  some of his closest associates stuck to the BJP to win in the elections. Yediyurappa may have won just six seats but he has delivered a debilitating defeat, one of the worst ever in Karnataka’s history for a ruling party. And it’s not as if he completely took away the vote of the Lingayat community. Even his community, on which he had banked so much, trusted the Congress in several parts of north Karnataka. It is where the Congress got the majority of its seats. Yediyurappa, in fact, delivered the state to the Congress.

In fact, the Congress should be more than thankful to him for this victory. It’s got a decent 121 seats in its kitty, with 40 each going to the BJP and JD(S). It could have got more, maybe even 140-150, if only it had set its house in order by selecting the right candidates. More so in the Old Mysore region where the main challenger was the JD(S). To some extent, one of the reasons for it getting past the halfway mark in the 224-member assembly is the last-minute efforts to get disgruntled partymen working for the party. This exercise went on even in the last five days before polling. Indeed, even now there is no other election machinery that can match the Congress in the last few days of an election.