They were to inherit the earth. Start-ups, the playfield of the young and the restless, have had a hard reality check. What gives? 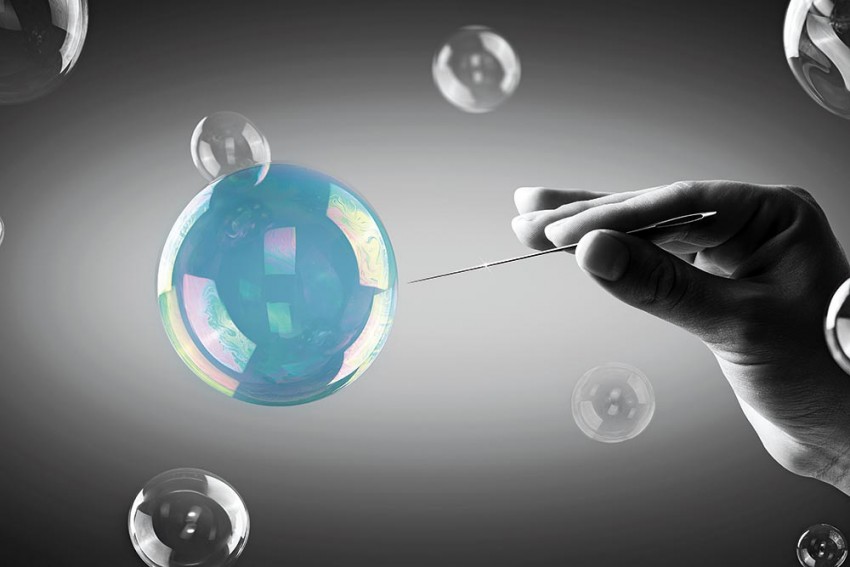 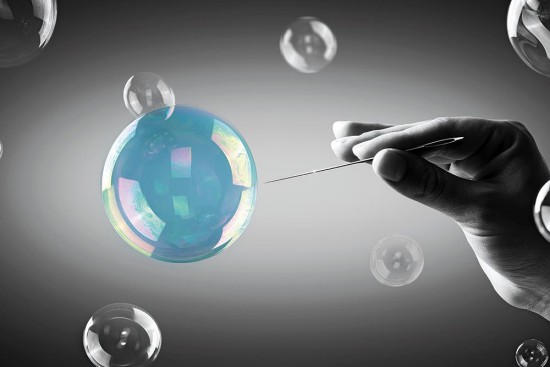 All figures in US $

We don’t know the ceremonial rites followed at the collective ‘start-up funeral’ in Bangalore last month—was it cremation, or burial? And if the latter, was it in foetal position, in padmasana or standing upright? Upside down, nose first, may have been appropriate for some of them. That would visually match the steep clines observed on the performance graphs. Yes, many of them are still fighting. And yes, in India we believe in rebirth. But the story of the post-hype years is most elegantly caught in some startling data.

Last week, there were talks of the beleaguered e-commerce major Snapdeal getting some much-needed oxygen supply from the funding arm of Softbank. The piece of statistic to zoom in on was the valuation: the seven-year-old company, set up by two Wharton and IIT-D alumni, was bei­ng considered at under $3 billion. That’s less than half of the $6.5-7 billion it commanded when it last raised funds just a year ago, in February 2016. This came weeks after Snapdeal sacked some 600 people and wound down some of its non-core businesses like ShopO.

In December 2016, after running it for four years, India’s largest e-commerce company Flipkart pressed the shutdown button on DigiFlip, a company it had started to sell computers and accessories. Around the same time, Flipkart’s logistics arm Ekart discontinued its hyperlocal delivery and its courier service. This January, a Fidelity-managed mut­ual fund pegged the valuation of Flipkart at $5.56 billion. Just a year-and-a-half ago, in May 2015, at its peak, Flipkart commanded a valuation of $15.5 billion. An erosion of $10 billion in less than two years (to get the scale, that’s more than the whole NREGA outlay for 2017-18).

“E-commerce has yet to find a model in India. The bulk of the business has been based on unit-level economics that is flawed.”
Arvind Singhal, Chairman, Technopak

In start-up city Bangalore, a couple of young ’uns are hitting the obituary columns every week—they are just not being able to cope with competition and high cash burn. In 2016, over 200 start-ups bit the dust—50 per cent higher than the previous year. Across the board, start-ups and e-commerce firms are laying off people to reduce costs. Besides Snapdeal now, Craftsvilla, Tolexo and YepMe also shed flab in the recent past, according to reports. A large number of grocery, food delivery and edu­cation start-ups have folded up. Someone could make money with a start-up offering quick, clean online funeral services for start-ups.

Across India’s e-commerce and start-up ecosystem, a rosy promised land till the other day, all the optimism, euphoria and brisk activity have given way to despair and doom. Investors, normally beelining to India with open purse-strings, have suddenly turned parsimonious and thrifty, asking many more questions, setting more stringent conditions, generally raising the bar.

India has over 10,000 start-ups, putting it among the top five countries in those numbers—the US, naturally, is number one with 83,000+. More specifically, India is also the third-largest tech start-up hub in the world—4,500 of its start-ups operate in that domain—and that hub is in trouble.

Typically, Indian players showed GMV (gross merchan­dise value) and growth coupled with high valuati­ons and a strong leadership team on paper. The ploy worked as long as investors threw money around. Few had a clearly charted path to profitability. Now all that’s changing as investors see no returns from market India. 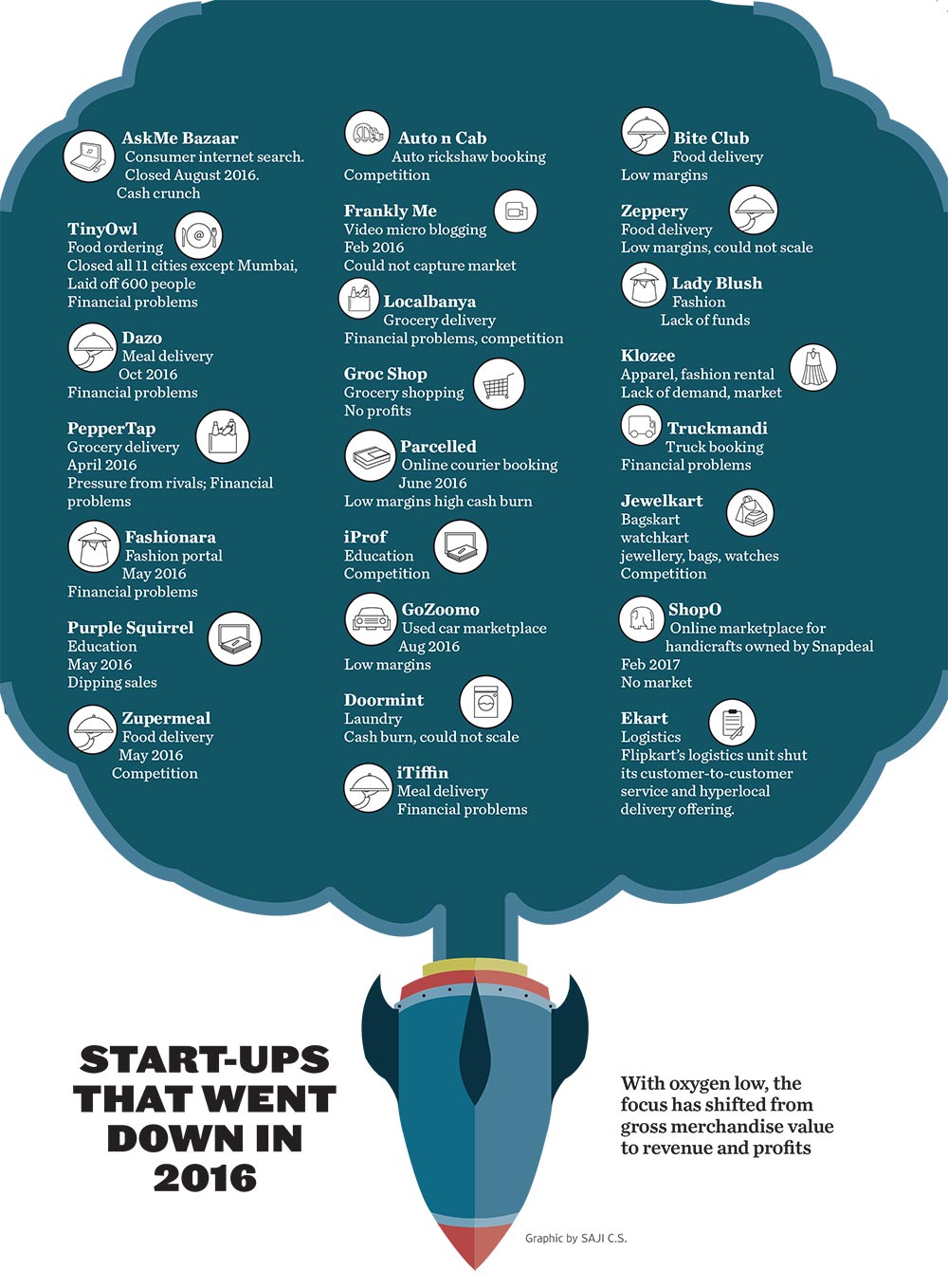 Snapdeal founder Kunal Bahl, in his e-mail to employees, might as well have been making a universal diagnosis: “We started growing our business much before the right economic model and market-fit was figured out. We also started dive­rsifying and started new projects while we still hadn’t perfected the first or made it profitable. We started building our team and capabilities for a much larger size of business than what was requ­ired with the present scale.”

So was it a bubble and has it burst? Absolutely, says K. Vaitheeswaran, Indiaplaza founder and a start-up frontiersman, who “saw this coming” as early as in 2011 when the bubble started forming. “The forecast numbers of $100-200 billion business by 2020 might not happen. Discounts led a lot of customers to come into e-commerce. That’s going now; so growth won’t happen. Inves­tors also came in to fire up valuations and sell quickly and make money. That’s not happening either.”

One trick everyone followed—to outfund and outspend competitors—worked well as long as there were Indian competitors. Once MNCs like Amazon and Uber came in, not only the goalposts but the whole football field shifted. Soon, investors latched on to the fact that returns from India will be illusory and started looking elsewhere. Tiger Global, one of the largest venture cap funds that had backed a large number of Indian companies, including Flipkart, recently picked up a significant amount of stock in Amazon and Uber. 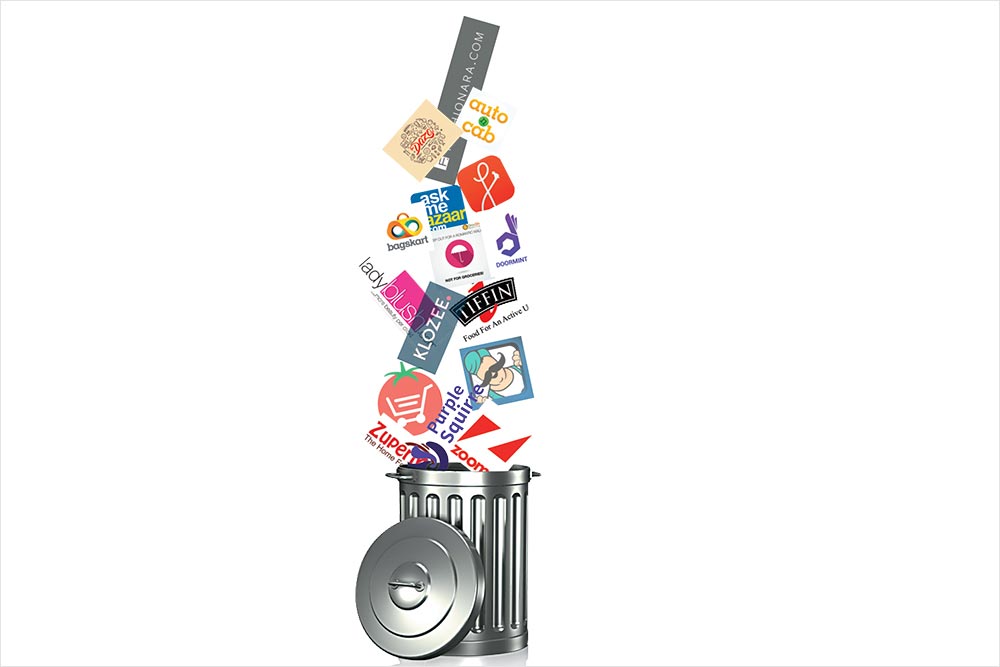 Tiger was the bellwether, and others also started turning off the tap. That pricked the bubble. Ind­ia’s start-up funding dropped from $4.9 billion in 2015 to $3.8-4 billion in ’16, says a Nasscom-Zinnov study. In fact, in the December 2016 quarter, less than $300 million had actually come in!

Retail expert Arvind Singhal, who is the Technopak CMD, says the investors should have questio­ned the business model and kept a close eye on the metrics. “Many came on board without much und­erstanding of the business. There was no model in e-commerce: they were buying at Rs 100 and selling at Rs 90. The bulk of the business was based on flawed unit-level economics and discounts.”

Now, with oxygen low, the focus has shifted from GMV to revenue and profits. While aggressive adv­ertising and deep discounting did help spike revenues for FY2015-16, truth be told, losses mounted as well. Add to that the leadership changes, the entry of heavy hitters like Amazon, Uber and Facebook and multiple rounds of devaluation. Another deterrent layer was added for investors when tech stocks started coming down at bourses like Nasdaq, which made investing decisions dicier.

“More than a third of online buyers don’t prefer digital payment. In fact, for Indian start-ups, 2016 was a year of anxiety.”
Sanchit Vir Gogia, CEO, Greyhound

So what did the companies do wrong really? Firstly, they spent money irresponsibly on marke­ting. They also did not think of unit-level economics or how to make money. None had a robust revenue model. Instead, they used a lot of money to outsmart each other rather than using the money to build a fundamentally strong business. They also raised so much money at unreal levels of valuation that the bar was set too high. Failure was, in a sense, built into the logic of things.

Says Sreedhar Prasad, partner, start-ups and e-commerce, KPMG India: “Companies are being forced to reinvent their business model. Many are not doing well because their business models are skewed towards burning cash and acquiring revenues. Today, investors are not keen on companies that run only on investor money and don’t have a sustaining model by themselves. That’s a major change. Unless there’s a clear path to profitability, companies will find it difficult to attract money.”

That engenders a new dilemma. If refocusing on tangible outcomes like revenue can impress a fleeing investor, it may well alienate consumers, who will be suddenly bereft of the deep discounts that had prompted them to use services from start-ups. Deep discounting is likely to taper off in the medium term, and start-ups will have to put in the real hard yards—retain consumers on the strength of their shopping experience, a strategy spoken about earlier but not necessarily put into practice.

Sanchit Vir Gogia, founder & CEO, Greyhound Knowledge Group, calls 2016 “a year of anxi­ety” for Indian start-ups, with “a much-needed mar­ket correction” that saw “both devaluation of cate­gory leaders and challengers and, in some cases, total erosion of those with a near-clone strategy”. Investor sentiment was deeply hurt, he says, for they expected big bang returns in the near term, and the mood of disaffection “can only be expec­ted to intensify” in this quarter. Sandeep Ladda of PwC India says funding was drying up as valuation was skyrocketing. “All the same, margins were wafer-­thin and customer acquisition costs were too high.”

Says Vineet Singh, chief business officer, Mobikwik: “The venture capitalists have taken a small pause—asking harder questions, doing harder appraisals and asking when companies will be profitable. The market is going through a tightening.” Obviously, such tight monitoring has never happened before and has taken the somewhat spoilt start-up ecosystem unawares.

Investors, showing signs of impatience, are also moving in to take the wheel themselves. Earlier this year, Tiger Global put its own man, Kalyan Krishnamurthy, in the corner office at a beleague­red Flipkart. Even better-performing companies are not entirely immune to this. Recently, Ali­baba, a key investor in Paytm, increased its stake in Paytm E-commerce—effectively moving closer to wresting control of the company.

Online retailers are now vulnerable to funding risks, according to India Ratings and Research, with access to easy private equity funds tightening. Flush with PE funds till 2015, their fortunes ebbed last year, with muted deals during January-April 2016. A funding squeeze becomes disquieting at a time when e-tailers are attempting a structural transition in their business model, inv­olving considerable capital expenditure. Trying to shift out of deep discounting to a more sustainable model—creating durable customer loyalty through improved efficiencies—requires considerable investment commitment. Existing players have large planned investments in the value chain.

There was another cause for pain for e-comme­rce players: demonetisation. After last November, a lot of them were hit hard and numbers started plummeting—a large amount of e-comme­rce happens through the cash on delivery model. Says Gogia, “As per Greyhound estimates, cash-on-delivery contributes on average 65-75 per cent of total online sales, a chunk that has been impacted in a big way. More than a third of Indian online buyers remain averse to using digital payments as a met­hod of purchase. Current spending sentiment continues to be tow­ards basics and not on luxuries.”

For all the gloom, analysts hew to a rosier prophecy for the long term. Ladda says the India story is intact. “There is enough opportunity to grow. E-commerce has penetrated the major metros and cities but not the smaller, tier-2 towns. We haven’t crossed even a tenth of what is available.”

The sense of virgin territories out there is stron­ger for another reason. Organised retail has not played out as expected and is yet to reach tier 2-3 cities—players feel e-commerce will eventually fill that space. Says Radhika Aggarwal, co-fou­nder, Shopclues: “E-commerce is still very nasc­ent in India. Organised retail is 5-6 per cent of all retail; e-commerce is a fraction of that. Funding will be available for a business with a path to profitability; the consumers are here and investors are willing to come. About 50 per cent of our mobile traffic comes from tier 2-3 cities, 90 per cent of these are Reliance Jio customers, brand new to e-commerce. That’s a pretty good sign for the future.”

KPMG’s Prasad says the India story will see a clear path out of the fog. For one, the fundamental fact—the existence of a big, active market—has not altered. “It’s just a temporary thing and things could come back to normal in two quarters. At present, there’s a correction happening and companies too are correcting their models,” he says.

Everybody concurs on one fact: there’s space. Of the $650 billion Indian retail sector, organised retail accounts for less than a tenth. And e-commerce fills only a minuscule fraction of that—$10 billion, or 1.6 per cent. The logic of technology is on the side of e-commerce. So are the mass of Ind­ian consumers waiting for the next big deal or service. Being spoonfed on investor money had, ironically, not left many start-ups combat-fit. But eventually, as Singhal says, many of them will see version 3.0 or 4.0. Maybe all we’re waiting for is someone with a bright idea to crack the profitability riddle.