How Much To Roll A Thousand Beedis?

The debate on minimum wages takes on the one for investments 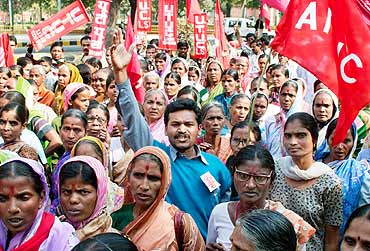 outlookindia.com
-0001-11-30T00:00:00+0553
On February 25, on the eve of the second anniversary of his regime, Haryana chief minister Bhupinder Singh Hooda extended a grand gesture to the state's labouring class. In the presence of Congress president Sonia Gandhi at a mammoth rally at Sirsa, the CM announced an over 40 per cent hike in minimum wages for unskilled workers. With a figure of Rs 135 a day, Haryana will soon be among the highest minimum wage-paying states in India.

Hooda's decision wasn't surprising, as Sonia Gandhi too seems to be in public war mode as regards ironing out the inequities in Indian society. In this Budget, finance minister P. Chidambaram said he would extend the existing death and disability insurance cover to the 15 million rural landless households "which enjoy no cover at all today". In fact, it's been a key priority of the UPA government to bring the labourers and the rural landless under a state-aided social security net.

Ironically, in the Communist state of West Bengal, the minimum wages (Rs 64.22 a day) for several categories of unskilled workers is less than that prescribed by the Minimum Wage Act (Rs 66). And the state is a willing party to agreements that specify even lower wages. In February '06, the state's welfare commissioner approved a pact between beedi merchants of Murshidabad district and workers for a minimum wage of Rs 41 per thousand rolled beedis. Experts say most workers can roll around 900 beedis a day and, hence, may just about be able to earn this amount.

Therein lies the contradiction and the gap between intentions and realities. But West Bengal is not the only state that's paying wages lower than the Centre's minimum limit. Even in progressive ones like Tamil Nadu and Karnataka, they are lower than Bengal's for sections of unskilled workers. "While the Centre prescribes the national floor level, it's not binding on the states," explains Sudha Pillai, labour secretary, Union ministry of labour. She adds that the Centre can only play an "advocacy role" as it has no legal backing to enforce minimum wages at the state level.

Obviously, this is not the only problem area. Sometimes the intentions of the states are diluted due to pressures from industry. There are other legal lacunae and although the TUs are consulted when states revise minimum wages, their suggestions are not binding. End result: the fate of the 30 crore workers in the unorganised sector—who comprise 85 per cent of the country's workforce—hangs in the balance with most being underpaid. This happens in a scenario where the majority of them don't have access to insurance (life, health, and disability) or social security.

In Haryana, for instance, the industry is up in arms against the move. The business community does think there was a need to revise wages upwards, but is unhappy with the steep increase. An agitated Krishna Kalra, secretary general, PHDCCI, says, "The hike will deter those interested in investing in the state." He adds that wages should be linked to the CPI and help industries to remain competitive. P.K. Jain, CEO, Malt Company India, which has operations in Haryana, thinks the new wages "will have a cascading effect and effectively work out to a 50-55 per cent hike".

There's also a growing feeling that the state's move will hurt the small and the medium industries. That's because large firms like Maruti Udyog have higher salary slabs. "For a state that's wooing investments and has been quite progressive—it was the first to introduce VAT—this move comes as a shock, especially for the small-scale enterprises," says J.K. Mehta of the CII's Haryana state council. PHDCCI president Sanjay Bhatia reiterates that the decision "has been taken without considering the capacity of the small units to pay these wages".

What's worse, the CM announced the hike even as wage consultations were on between the state, TUs and industry. "We had two meetings but the employers' representatives had not given consent for the steep increase. On February 6, the government had given them two months to think over the proposals," says Rajiv Kapoor, general secretary, Faridabad Industries Association. 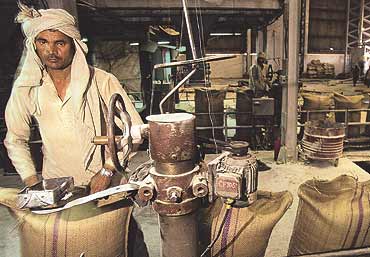 Similar views have pressurised other states not to raise minimum wages. As in the case of states aggressively wooing the private sector. In Bengal, for instance, CM Buddhadeb Bhattacharya has embarked on economic reforms on the premise that "either you reform or perish" in the present milieu of globalisation. He believes India can compete with China only if it adopts the Chinese philosophy of not to 'stick to dogmas' and 'learn the truth from the facts'.

Interestingly, the labour unions have their own criticisms against such ideas. They feel that reforms don't just imply giving the employers the right to hire-and-fire; it also includes giving labour the opportunity to earn decent wages. CITU president M.K. Pandhe stresses the point that the Minimum Wages Act doesn't lay down detailed norms and that trade unions should be an integral part of the decision-making process. He wants the law to provide for need-based minimum wages, which was decided at the 15th Indian Labour Conference in 1957. This will be one of the issues raised at this year's labour conference, scheduled for April-end.

At a macro level, labour leaders are critical of existing policies despite the UPA's public admissions of wanting to help workers in the unorganised sector. INTUC president Sanjeev Reddy attacks the insurance scheme that Chidambaram has announced in this year's budget. "We are not happy with the budget proposal for unorganised landless labourers. Most of them don't have work for the entire year and will find it difficult to pay Re 1 per day as premium amount."

The growing feeling is that the government is making a lot of noise about promises, but there is no "practical approach" to ensure better wages and social security for unorganised workers. As Reddy puts it: "Only when elections are round the corner do policymakers talk about the unorganised sector. There's no concrete political effort by any of the parties. A determined approach is required."

A serious attempt to tackle labour-related issues is now being made by the Union labour ministry, which is finalising a draft legislation for the unorganised sector. The bill, which may be introduced in Parliament this year, will cover the entire gamut of a protection net to the workers, be it in terms of enhancing their skills to ensure higher wages, giving them all kinds of insurance cover, and saving them from possible ill-treatment by employers. The ministry will also set up an internal task force to flesh out the details of the finance minister's budget proposal.

Clearly, it'll not be the laws but the intense interplay between political and economic factors that will decide the destiny of the unorganised workers from now on. Other factors that'll play a role will be the tussle between various states to woo investments, and the Centre's pressure on them to improve the lives of deprived people. Sonia Gandhi wants minimum wages to go up, and more landless workers to come into the social net. And some of the Congress CMs will want to please their political masters.

But the Congress only rules in a few states and, hence, the impact of Sonia's diktat will be limited. The UPA government needs to send the right reforms signals to foreign investors. Not to forget a finance minister who's obsessed with fiscal prudence and wouldn't want to open his purse strings too much. Meanwhile, the states wish to woo more investments but will also be under political pressure to hike minimum wages to woo their traditional, and newer vote banks. It's anybody's guess whether politics will triumph over economics, or vice versa.