How Much Can We Forgo To India Inc?

The TV anchor asked eagerly of Arun Jaitley whether he would take hard decisions or, in the case of a bad drought, revert to loan waivers and (obviously wasteful) subsidies. The finance minister replied that it depended on the situation as it unfolded but he hoped he wouldn’t have to return to such steps. “We hope so too,” said the anchor fervently. Which was cute, coming from someone pushing a wish list of the corporate world as hard-hitting journalism. A corporate world which has on average received Rs 7 crore every hour (or Rs 168 crore every day) in write-offs on just direct corporate income tax alone. And that for nine years running. (Longer, but we only have data for those nine years.)

And that’s if we look only at corporate income tax. Cast your gaze across write-offs on customs and excise duties and the amount quadruples. The provisional figure written off for the corporate needy and the and the belly-aching better off is Rs 5,72,923 crore. Or Rs 5.32 lakh-crore if you leave out something like personal income tax, which covers a relatively wider group of people.

It’s close to three times the amount said to have been lost in the 2G scam.  About four times what the oil marketing companies claim to have lost in so-called “under-recoveries” in 2012-13. Almost five times what this year’s budget earmarks for the public distribution system. And over 15 times what’s been allocated for the MNREGS. It’s the biggest giveaway, an unending free lunch that’s renewed every year. Gee, it’s legal, too. It is government policy. It’s in the Union Budget. And it is the largest conceivable transfer of wealth and resources to the wealthy and the corporate world that the media almost never look at.

It’s tucked away at the very rear of the budget document. A seemingly innocuous annexure. It’s title, though, is disarmingly honest. ‘Statement of Revenue Foregone.’ (see: http://indiabudget.nic.in/ub2014-15/statrevfor/annex12.pdf) There are those who point out that this should more correctly read ‘forgone’ and not ‘foregone’. The former actually des­cribes the process of relinquishing or abstaining from something. In this case, from collecting taxes that are legitimately due. The  budget document says ‘revenue foregone’. However, the write-offs are anything but semantic.

So it totalled Rs 5.32 lakh-crore in 2013-14. But budgets only started carrying that annexure a few years ago, and we only have the data from 2005-06 to 2013-14. In those nine years, the corporate karza maafi amounted to Rs 36.5 lakh-crore. That, in case you like the sound of the word, is Rs 36.5 trillion. (Okay, so for the record, these were all UPA years. But let’s see next year if the NDA proves even slightly different).

the provisional figure written off for the corporate needy and belly-aching better-offs is Rs 5,72,923 crore.

For those stricken by number-crunchitis: that works out, on average, to Rs 1,110 crore every day—for nine years. That’s one hell of a free lunch. Sure, there are elements that benefit wider groups. Like personal income tax concessions (which is why they’re excluded from the calculations here across those nine years). But do look at some of the big items.

In more than one year since 2005-06, the item hogging the biggest write-offs in customs duty was ‘gold, diamonds & jewellery’. Not quite the province of the aam aadmi or aam aurat. In 2013-14, the amount was Rs 48,635 crore. That was more than the amount written-off on machinery. Greater than what was written off on vegetables, fru­­its, cereals and vegetable oils. In  36 months between 2011-14, duty write-offs on gold, dia­­m­onds and jewellery totalled Rs 1.67 lakh crore. 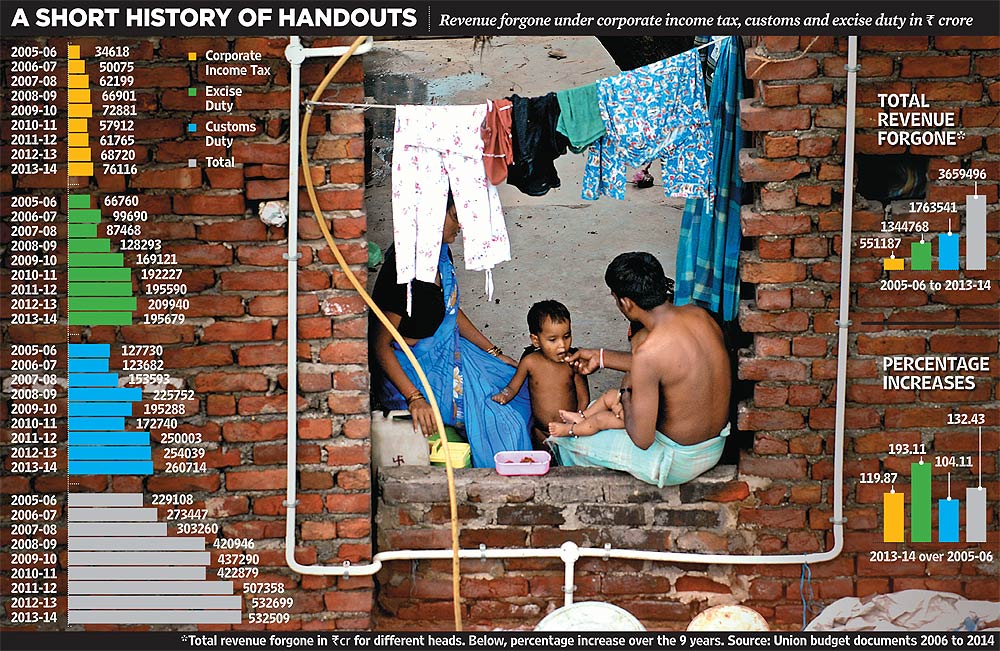 Yet, the concern is over a one-time loan waiver to  millions and millions of farmers (which never touched the most needy of them). Or ‘food subsidy’ worth less than ten rupees a day per person below the poverty line in the hungriest nation on earth. Not over giveaways to the corporate world and the better off that cross 1,100 crore a day on average in nine years. There is hand-wringing over a rural employment guarantee programme that, at its very best, cannot  give Rs 15,000 in an entire year to a family of five. Not over corporate karza maafi that works out across those nine years to Rs 1.28 lakh per second.

We could have used that Rs 36.5 trillion a bit differently. You see, with that sum, you could:

By the way, if these revenues had been realised, around 30 per cent of their value would have devolved to the states. So their fiscal health is affected by the Centre’s massive corporate karza maafi. Even just the amount foregone in 2013-14 can fund the rural jobs scheme for three decades. Or the PDS for four-and-a-half years.

Here’s a media full of market televangelists who preach every night about the need to trim subsidies. Why not start with those above? Well, because so many media outlets are part of corporations locked in the feeding frenzy at the subsidy trough. But to return briefly to the semantics of loot and grab (versus crumbs off the table). Give the poor and hungry assistance worth less than Rs 10 a day to help them have just a tad more food—that’s a subsidy. Give trillions of rupees to the rich—that’s an ‘incentive’ or at best a ‘deduction’. Even the otherwise frank ‘Statement of Revenue Foregone’ titles many giveaways as  ‘incentive/deduction’ or, at best ‘concessions’.

It’s not as if governments or officialdom are unaware of how regressive all this is. The 2009-10 budget said in so many words: “The amount of revenue foregone continues to inc­r­e­ase year after year. As a percentage of aggregate tax collection, revenue foregone remains high and shows an increasing trend as far as corporate income tax is considered for the fin­ancial year 2008-09. In case of indirect taxes, the trend shows a significant increase for the financial years 2009-10 due to a reduction in customs and excise duties. Therefore, to reverse this trend, an expansion in tax base is called for.”

I wrote about this at the time. And the language and tone changed from the next year. No more calls for reversal. I won­der why? Yet, the budget still notes a rising trend in plu­tocrat plunder. Even this year, it notes: “The total revenue foregone from central taxes is showing an upward trend.” Now remember, the same class of ‘subsidy ben­eficiaries’ loot public sector banks of countless thousands of crores. By the time this piece is out, the All-India Bank Employees Ass­o­ciation will have revealed the names of wan­ton defaulters who currently owe the banks tens of tho­u­sands of crores. These are names governments have ref­used to reveal even to Parliament on the plea of the RBI Act and banking secrecy.

Who says industry has been doing badly?  The amounts recorded as written-off in the Statement of Revenue Foregone for 2013-14 are 132 per cent higher than they were in 2005-06. (Even with the budget document gently, sometimes silently, clucking its tongue at the trend). Corporate karza maafi is a growth industry. And an efficient one.

(Magsaysay Award-winner Palagummi Sainath is the country’s foremost chronicler of the travails of farmers. A shorter version of this piece appeared on his blog, www.psainath.org)