How Grey Is My Valley

The mantle's changed hands, but Kashmiris are weary of the Abdullahs' political opportunism 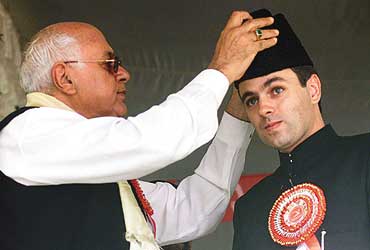 outlookindia.com
-0001-11-30T00:00:00+05:53
"Since Kashmir does not have a sky of its own, a (son)rise or a (son)set does not matter at all."
— Abdul Ghani Bhat, Hurriyat Conference chairman, on Omar Abdullah taking over the National Conference leadership

In Srinagar, political opportunism as indulged in by the Abdullahs doesn't surprise anyone. And it doesn't need much insight to predict that come election time the same raga of autonomy will be sung at the highest possible pitch by the father and son duo. Farooq and Omar Abdullah, who have been running with the BJP-led NDA government for the last three years enjoying the spoils of power in Delhi, are now pretending to go ballistic with the Centre over the autonomy issue. The only difference is this time around people see through the farce being played out.

Says a Srinagar-based lawyer: "The two are like chameleons, speaking in different voices in Srinagar and Delhi. All this sudden talk of autonomy is nothing but political opportunism. It is not the interests of Kashmiris that concerns the two. Father and son are only interested in power."

In fact, even in the thick of the autonomy rhetoric the duo haven't stopped bargaining in New Delhi. Abdullah Sr, upset that he isn't being considered for vice-presidentship, said he wouldn't mind settling for a senior post (read external affairs minister) in Vajpayee's cabinet. Meanwhile, Junior also wants to remain in the Union cabinet, although he would much rather prefer a lighter job than the MoS, external affairs, portfolio he currently holds. This would also give him more time for campaigning. Of course, he will quit the cabinet once elected as chief minister.

There is no doubt that the BJP sees the National Conference (NC) as a key ally and Omar Abdullah as a credible secular face in the Union cabinet. The younger Abdullah has also handled his external affairs portfolio efficiently. As for Farooq, many in the government feel that the NC leader's involvement in the Kashmir peace process is essential. They also hold the view that Omar as chief minister may take the process forward with new vigour.

But with one foot entrenched in Delhi, the Abdullahs want to have their cake and eat it too. So, in Srinagar, the father-son duo proclaim they will win autonomy for the state even as they hanker for power in Delhi. An example of the Abdullahs in election mode was visible at the "coronation" ceremony in Srinagar last fortnight when Farooq handed over the NC presidentship to his son. It was Farooq who set the pace with this warning to Vajpayee. "You cannot bring back peace in Kashmir without conceding the demand for autonomy. You may try and suppress the people of J&K and Ladakh, but till they are not given autonomy there will be no peace in the region. Just like the call for the freedom struggle was not merely a slogan, similarly the call for autonomy is also not just a slogan. Thousands of people from the state have given their blood for the cause. We will achieve this autonomy."

Omar also could not hide his bitterness towards Vajpayee for not pushing his father's candidature for president, or at least vice-president. Omar reiterated the theme of his father being shabbily treated and the Centre reneging on promises made to him. Abdullah Jr went on to prophesy that the same would be the fate of other promises made to the Kashmiris by the Vajpayee government.

The tone and tenor of the father and son duo's speeches at the party convention was, feel political observers, an attempt to make Kashmiris believe that this time the NC meant business as far as the autonomy issue was concerned. Both Omar and Farooq put New Delhi and Islamabad on the same plane, holding the two equally responsible for the "sufferings of the people of Kashmir".

The anti-Centre approach of father and son did succeed in evoking some level of appreciation from the party cadre. But it proved shortlived. In less than 24 hours, the two were in New Delhi seeking an audience with the prime minister. The agenda was not Kashmir's autonomy but an effort to ensure that Farooq secures a plum post at the Centre.

The Kashmiri people, especially NC workers, were quick to realise that what transpired at the party convention was nothing but a facade—an attempt to blackmail New Delhi. As an NC leader said: "The people of the Valley have heard this rhetoric before. The only difference was in the past some believed Farooq. His credibility is fast going down."

Others in the party ask that if Jammu and Kashmir was top priority for the Abdullahs, then why weren't Farooq and Omar on the campaign trail instead of politicking in New Delhi. Many point out how they find Farooq's holidays in Europe—even as the Valley burns—a reflection of his all-too-casual approach.

Farooq himself has no credible explanation for going with the BJP at the Centre when both are rivals at the state level. It was easier to justify supporting either a Congress or National Front government with secular leanings but the basic ideology of the NC clashes with that of the BJP. And yet despite objections from within the party, Farooq backed the NDA and got his son a berth in the Union cabinet. It's another matter that father and son have frequently threatened to quit the NDA but have stopped short of doing so.

Even though the National Conference managed a gathering of over 8,000 delegates at its one-day convention—where Farooq handed over the mantle to his son in Srinagar—the much publicised event failed to leave any impact on the common people. The 'Omar show' was by any reckoning an apology of an event. Party workers were herded in buses by National Conference legislators from their constituencies. All kinds of promises and threats were employed to ensure a healthy turnout.

The money spent on the ceremony also came up for criticism. Senior leader of the People's Democratic Party, Mehbooba Mufti, has alleged that Rs 1.5 crore was spent on the show. "What could have been a simple ceremony was turned into an extravaganza," she said and asked Abdullah to "explain to the people of the state where the money came from". But such criticism doesn't hamper the Abdullahs. As an Opposition leader put it, democracy in the Valley now means "by the Abdullahs, for the Abdullahs".