How DU Was Baptised In ABVP Fire

Delhi University professor Prasanta Chakravarty, who was beaten up during students' protest against ABVP, says that right-wing sentiment on campus has ­increased 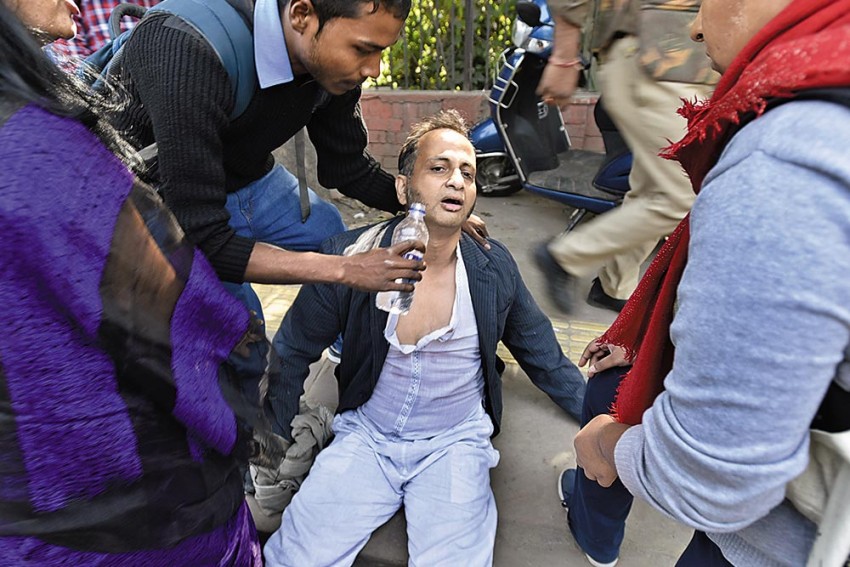 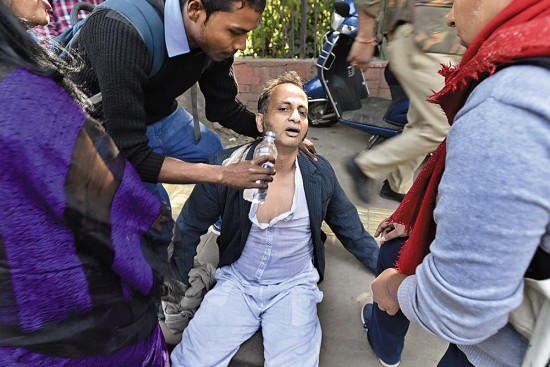 Prasanta Chakravarty, an English professor at Delhi University, was hospitalised after being beaten up during the protest against ABVP. This is his take on what happened and the larger context.

I was at the protest march against the right-wing hooliganism that had prevented JNU research scholar Umar Khalid and others from attending a panel discussion the previous day at Ramjas College in Delhi University. I am at solidarity events like this nearly every other week. There were students who were protesting against the hooliganism and there was one group that was clearly agitating. Suddenly, a bunch of them jumped on me and dragged me away. I was being strangled with my scarf. My colleagues couldn’t see what is happening and by the time they could reach me, the damage was already done. I was kicked with heavy boots, which has affected the pleura of my lungs and rib cage. Now I am in a rib brace and getting physiotherapy done.

The police were there, but as onlookers. I tried to resist the attackers. But with 10-12 people attacking me, it was hard. I have lesions and contusions. It will be many months until I heal and can get back to teaching. I have now filed an FIR.

Delhi University has been simmering for a while. This is not the first incident of violence, nor will it be the last. I am only the latest victim but there will be more after me. We can’t be sentimental, hoping there won’t be violence on us. We have to fight this tooth and nail.

Unlike left-liberal JNU, DU is more of a feudal and centre-right space. JNU has a more diverse crowd, while DU can be identified more with north India. DU may have been less feudal under the previous government and right-wing sentiment has surely ­increased over the past three years, but it has always had a feudal mentality. In fact, this mentality explains the rise of the Right in DU and why they have become more brazen about this kind of intimidation. There is now a concerted cultural approach to this, and we can see a lot of money being put into it as well.

Hence, this recent attack was simmering for a while, but the event at Ramjas College took it over the edge. There is a palpable tension in the air, though it is hard to put a finger on what exactly. The feeling now is such that teachers give lectures and leave and students are also reluctant to stick around.

This situation, though, isn’t entirely hopeless. The Right has always accused the media of not projecting them favourably and now it has a dominating presence on social media. That leaves the university as the only free space where ideas like the homogeneity of India and goondaism can be discussed and challenged. If this space too is taken over, this will be a problem.

Hundreds of young people were politically baptised because of the events in DU. Affiliated neither to Left nor Right, many are talking about how they have been forced to think radically for the first time. An otherwise placid section has been radicalised, many of whom otherwise simply wanted to go to America. But with Trump there, even that is no longer a good idea.

There is nowhere to hide from the Right; they are everywhere. Since runn­ing away is not an option, students have to take charge instead. They have to participate in the electoral process and vote. My hope is that India is resilient enough to challenge the Right. One cannot be neutral about this. This needs to be fought and in real terms.

As told to Anoo Bhuyan

“The RSS Too Has Freedom Of Speech.”