‘How Do I Make Dad Understand? He Doesn’t Understand...’ 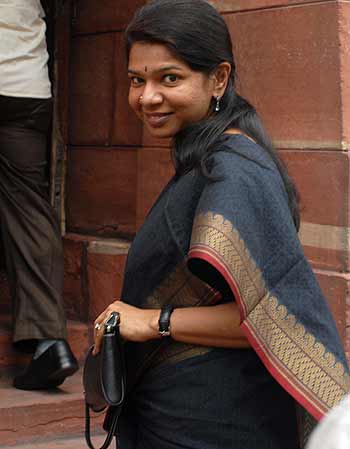 Hear it as they said it: The Kanimozhi-Radia Tapes

Niira Radia: Hi, Kani. I spoke to them again whether they would speak to the CM (Karunanidhi) and give him some message, but they haven’t taken a call, I think what is being spread right now is that infrastructure should not be given to Baalu and Raja. When actually what is being said is that it should not be given to Maran and Baalu. So there is also a view that he (Maran) hasn’t met Sonia Gandhi, I have confirmed that.

Kani: Yeah, even I found out.

NR: I believe that he has indicated to somebody that he has met your father separately and had a meeting with him and briefed him on Delhi and your father had told him to quietly have a meeting in Delhi on his own.

Kani: No, that’s not true. Because when my...he actually asked everybody to leave and he just wanted to have a word alone. My mother, I mean she didn’t realise that, she just took a glass of buttermilk to my father, so she happened to be there, through the entire conversation. I mean, he hasn’t said anything alone. So, dad hasn’t said anything. Today, dad has been told that nobody who is actually interested in joining the cabinet should be allowed to negotiate.

Kani: Dad is quite okay with that.

Kani: He (Maran) is just lying and spreading (lies).

NR: No, he is saying that by the way. Because I spoke to Rajdeep just a few minutes ago. So, I asked Rajdeep, where did you get this information from? Then he said, look I’m going to tell you something. He said Sun TV is actually working overtime in spreading news to my, all other correspondents, not only ours, Times Now and everybody else. He said I recognised it last night, they gave us wrong information when they said that the deal was signed... Yeah, and he said I’m very conscious of it, but this whole aspect of infrastructure not going to Raja and Baalu is very dangerous.

NR: Hi, listen, they’re caught up in a meeting, but they’re going to speak to you.

NR: They’re going to speak you, that message has gone to them. What I’ve also mentioned to them is that you’re not, only Raja was supposed to have gone to the swearing-in. Daya is not talking to Ahmed Patel. I don’t know who Daya is talking to.

Kani: Okay. No, no, Daya is going to the swearing-in, no?

NR: No, that’s what I’ve heard from Congress that he has given his name, that he is going to the swearing-in.

Kani: I don’t know, he is supposed to come back with me. So, I mean, it’s just that he’s going out to say that whatever—in spite of whatever my leader says, I’m....

NR: Yeah, but your dad should be told, no?

NR: If your dad were to say to him that I only authorised Raja to go...

NR: I know you’re fed up of it...politics, my dear. I know, but it’s okay, but I know you are frustrated with him, so just leave him, just ignore him and you know he’ll soon become irrelevant. But you have to...

Kani: It’s not that. You know I don’t mind that somebody is against your own party and leader, that is what...

NR: Yeah, but then your father has to understand it, he’s not understanding, so you have to tell him that.

Kani: How do I make him understand? He doesn’t understand.

NR: Who is going to make him understand? Only you can do that. Nobody else, Kani. He will not listen to anyone else except you. You know that, the only person who he is going to listen to because some of the others, everybody else is still scared to go and tell him that. You are his daughter, so he can listen to you. You have to use your position, Kani, you have to. If you want to save the party, you’re going to have to use it.

Kani: Anyway, I’ll be leaving to the airport at 4 o’clock.

Kani: Sorry, did I wake you up?

Kani: No, no, I just wanted to know, I mean, what they are planning to give for me?

NR: I told you last night. I called after we spoke and I said that, you know, look at the health option. But give her environment and forest otherwise if health is not there, independent charge or consider the aviation one. You know, that’s the three I had said, you know. But they weren’t sure.

Kani: Even tourism is not worth it.

NR: Tourism’s independent charge, they will not give you Kani because Ghulam Nabi Azad has still not given his berth. He wants something more than what you call it—he has got only parliamentary affairs, you know.

NR: They don’t want to give an MP more than that.

NR: That’s why. So, I did mention tourism because I don’t know because they will keep it as a cabinet post.

NR: Health I think has already been allocated.

Kani: Environment, they will give, you know?

Kani: You know, just aviation, I will take it up. No problem. They said they’ll come back and tell us.

Hear it as they said it:  The Kanimozhi-Radia Tapes

‘I Know Who Planted In Congress That Azhagiri Knows No English’