'How Can Any Person Change The Word Of God?'

SGPC President on why she finds the film Jo Bole So Nihaal objectionable. 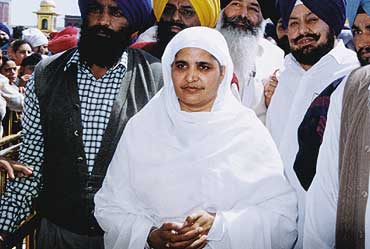 outlookindia.com
-0001-11-30T00:00:00+0553
Bibi Jagir Kaur, president of the Shiromani Gurudwara Parbandhak Committee (SGPC), in an interview with Chander Suta Dogra tells her why she finds the film Jo Bole So Nihaal objectionable. Excerpts:

The Punjab and Haryana High Court has declined to stay 'Jo Bole So Nihaal'; the Censor Board too has cleared it. What then did the SGPC find objectionable in the film to have passed a resolution demanding its ban?
It is not as simple a matter as objecting to the title of the film. If it was a religious or a historical film, the title was justified. But we have found that the film has two verses from the Gurubani which have been distorted. How can anyone take the liberty of changing the word of God? Then, hero Sunny Deol's mother as an Amritdhari (baptised) Sikh is shown approving of him having a sexual encounter with an fbi agent. Again, this same mother is shown as part of a conspiracy to kill the US President. We Sikhs have such good relations with the US. So many of our people are living in that country. Such films will not further the interests of Sikhs living abroad.

The producer and director of the film are both Sikhs. Why would they show disrespect to their own religion?
A Sikh is not a Sikh until he looks like one. He should sport hair, wear a turban, and display the outward forms of a Sikh. The film and the manner in which it has been filmed seem to be a conspiracy against the Sikhs to finish their religion and dilute their identity. The government appears to be deliberately trying to harm our minority community. When we asked them to delete the objectionable scenes and not show the film in its original form, the producers did not bother. They just withdrew it from Punjab and Chandigarh but continued showing it elsewhere. This means they're openly challenging us.

Drunkards and wastrels are a part of Sikh society too and this is bound to reflect in films. Why is the SGPC trying to cover up this reality?
That's true. Our own Sikh youth in Punjab are giving up the outward form of the faith by cutting their hair and beginning to drink and smoke. We have to take steps to curb that and not encourage it. The hero of a film is a role model for youngsters. And if we have films showing Sikh heroes conducting themselves in a blasphemous manner, we are within our rights to object.