How Big Is Georgetown?

It's America versus the rest of the world again. This time over WMDs Updates 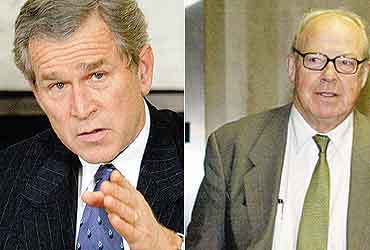 outlookindia.com
-0001-11-30T00:00:00+0553
AT the United Nations Security Council (UNSC) last week, the feeling was one of deja vu. The wrangling over the UN's role in post-war Iraq echoes, in many ways, the pre-war debate over the use of force in Iraq. Washington's elation at its success in removing Saddam Hussein has given way to unease that it hasn't unearthed weapons of mass destruction (WMD). Cited as the raison d'etre of the war, finding WMDs is becoming the litmus test for whether it was worth all the lives lost.

Experts, however, feel things are more complicated than simply proving Washington was guilty of conducting an illegal war. The crux of the issue is the kind of role UNSC should play in international affairs. With the US in control, and yet not keen to shoulder the burden of politically and economically reconstructing Iraq alone, attempts to block action on Iraq now could unwittingly damage the UNSC.

The US also needs the UN. "The UN's involvement is also crucial to avoid the notion that the US is an occupying force," notes a senior UN official. "The US is acutely aware that the growing American presence in West Asia could invite charges of empire-building and create new reasons for terrorists to target America."

As President George Bush called on the UN last week to summarily lift its economic sanctions on Iraq, it became painfully plausible that there could be yet another split in the UNSC. The US didn't take the UNSC's permission to go to war, yet it does need a vote to lift the current economic sanctions on Iraq. This would allow greater sales of Iraqi oil to pay for the reconstruction, money that is badly needed.

The issue of lifting sanctions, however, is linked inextricably to the UN's mandate on disarmament in Iraq. Security Council resolutions dating back to 1991 require UN inspectors to certify that Iraq is free of WMDs. Russia's ambassador to the UN, Sergei Lavrov, told Outlook, "We are not at all opposing the lifting of sanctions. But we insist that UNSC resolutions be implemented." The only way to verify that Iraq is free of WMDs, he said, would be to send UN inspectors back to Iraq.

Meeting for the first time since the war began, UNSC members were a subdued lot as they gathered on April 22. Unfazed by repeated threats from the US that it would punish France for its anti-war stance, Paris proposed the immediate lifting of sanctions against Iraq and simultaneously called for UN weapons inspectors to work alongside coalition teams to verify that Iraq had indeed been disarmed.

"The sanctions will be lifted as soon as they deliver their report." This French announcement displayed a new willingness to bridge the rift between the US and France. "I don't believe we are doing an about-turn, our stand against the war remained unchanged through the war," French ambassador to the UN, Jean Marc de la Sabliere, told Outlook. "The question now is how to move ahead, how to start the process that will lead to the lifting of sanctions." He added that the move would offer new opportunities for foreign investment and hence help the war-torn economy recover faster.

Yet, the French concession did not appease the Bush administration. "We have to take a look at all aspects of our relationship with France," secretary of state Colin Powell said in a TV interview. "France should be punished, Germany ignored and Russia forgiven," Condoleezza Rice, President Bush's national security advisor, is believed to have declared at the White House last week. In Paris, however, diplomats continued to sneer at Washington. As a French diplomat remarked, "The US has always liked to believe that it polices the world. It is in their own interests to cooperate with us on Iraq."

Besides Russia and France, the other permanent veto-wielding member which opposed the war, China, reacted cautiously.Wang Yingfan, Chinese ambassador to the UN, said the question of who would be in charge of oil sales was "very hard to answer. The situation is not at all clear". Most council members, including Britain, believe the way forward is to find the WMDs they believe Saddam had carefully concealed before the war. They agree that such weapons, if found by the US military, need to be verified by an independent source, like the UN Monitoring, Verification and Inspection Commission (unmovic).

This suggestion was backed by an informal presentation to the UNSC by the chief weapons inspector, Dr Hans Blix, who expressed his readiness to send inspection teams to Iraq. "We may not be the only ones in the world who have credibility, but I do think we have credibility for being objective and independent," said the 74-year-old Swede, as he entered the closed-door UN meeting last Tuesday. The US has disagreed vehemently and is sending its own 1,000-strong team of scientists, technicians, intelligence analysts and experts drawn from the US, UK and Australia to expand the search. While most countries—including the UK—have acknowledged that Blix and his team did the best they could in difficult circumstances, Washington has accused him of underplaying, if not suppressing, evidence of Iraqi deceit and failing to produce a "smoking gun".

If the Bush administration has its way, it will be "Goodbye Mr Blix". But Blix, who was literally pulled back to work last year while he had gone fishing with his wife in Sweden and who has become a household name since, has nothing to lose. His current term ends in June and he has indicated his willingness to step down even earlier if that in any way facilitates the UNMOVIC team's return to Iraq. Unmoved by the taunts heaped on him that he has helped Saddam Hussein by not siding with the US, he lambasted the US and Britain in an interview to the bbc, accusing them of employing questionable intelligence, including forged documents, in their desperation to prove that Iraq possessed banned weapons.

"We are trying to convince Washington that it's in their best interests to send UN inspectors back," said a European UN official based in New York. "It's absurd, but the US is trying to poach inspectors from UNMOVIC to join its civilian team."

While the rest of the world is convinced that the US might go to any length to save face, even its experts agree that finding weapons might be like searching for a needle in a haystack. "An American-led weapons search will never be as credible as a UN effort," admits a senior state department official. But given the mood Washington is in, it is not prepared to accept that there could still be anyone not willing to dance to its tune. This could only widen the diplomatic rift further.