A silent revolution. Men braving emasculation to tend to the hearth. 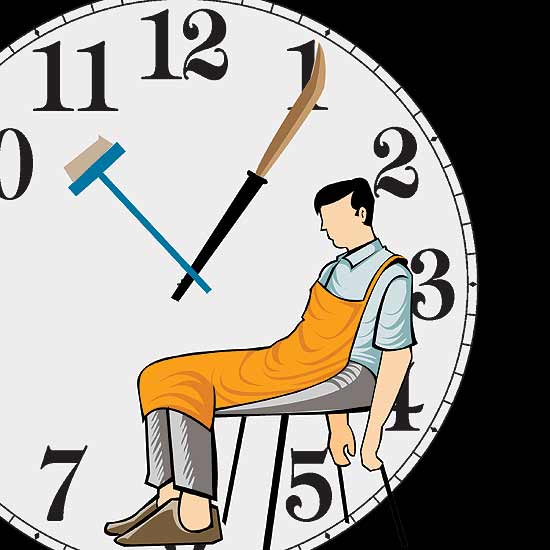 I have a friend who was once an accidental house husband. It was accidental because conventional wisdom would assume that no hot-blooded, heterosexual male would ever consciously choose to be the “Mrs” in a relationship. As it turned out, dharampati (is there a masculine equivalent for the term dutiful wife, dharampatni?) was stumbling through the initial years of an ill-chosen career and was routinely out of a job. Eventually, the “it was not in my blood” passionate reasoning for his serial unemployment ran thin and his free time met my insidious penchant for work avoidance and procrastination. We were soon afternoon phone pals. He also became my walker to book parties, which usually commence at an hour that is an attempt (I assume) at making a point to the gainfully employed. I was fascinated by his unique predicament (he’d decided that a career was not for him) and his living arrangements (he lived with his widowed mother-in-law). His consternations were conversational doppelgangers to the ones I had with married girlfriends, mostly revolving around his mother-in-law. “Don’t get me wrong,” he would start (referring to the MIL), “but guess what she did today.” This bore a familiar resonance, barring the small issue of gender, and I was soon making educated guesses.

It is suggested that post the economic slowdown in the West, there has been an increase in the number of men who handle the household while their wives have become the primary breadwinners. I witnessed an example of this during a recent stay in New York, when I happened to be navigating the cereal aisle behind two men who were in the midst of discussing an upcoming play date for their accompanying toddlers. “If that doesn’t work out,” one said to the other when I finally managed to overtake their leisurely side-by-side amble, “let’s at least try and meet for coffee.”