Buddhadeb will have to pay for the party's poll debacle 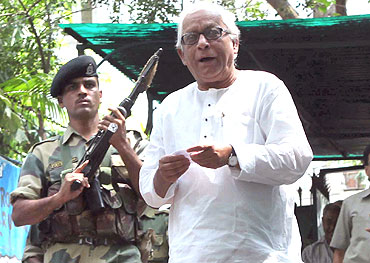 outlookindia.com
-0001-11-30T00:00:00+0553
"He had a different image when he first became the chief minister of West Bengal (in 2001)," a CPI(M) insider confided about Buddhadeb Bhattacharya on conditions of anonymity. "He was more or less unanimously agreed upon as the chief ministerial candidate after Jyoti Basu not because he was close to the former CM but because being a soft-spoken and culture-loving sort of man, he was perceived as someone who could be projected as a people’s leader." Eight years and nearly two terms later, Buddhadeb is a changed man. The buzz in the CPI(M) is that he may be a liability in the 2011 assembly elections.

A senior party leader has this to say: "It was difficult for some of us to accept the arrogance of the last couple of years (when Singur and Nandigram happened) when he actually said things like ‘blow them away’ while discussing ways to tackle obstacles and opposition to industrial projects." It is clear—regardless of what the party’s official stand may be—that there are enough of those within the CPI(M) who hold Buddhadeb responsible for the anti-people tag which eventually proved dear for the party in the recent Lok Sabha polls.

Kshiti Goswami, RSP leader and minister in the state government, told Outlook how his advocacy of caution on land acquisition always fell on deaf ears. "I warned them about the consequences of trying to take over fertile farm land but I could not convince them." On whether Buddhadeb’s acceptability as a leader among Left Front partners has diminished, "He (the CM) has softened quite a bit. The election results came as a crushing blow to him and he’s trying very hard to understand where he went wrong."

Make no mistake, beneath the veneer of unity, the CPI(M) is in disarray. There is a dilemma over who could be pitched as the party’s face in the next assembly polls. "The party will defer all official decision-making till the central committee meets in early June, but unofficially names of possible Buddhadeb replacements are doing the rounds," says political analyst Tarun Ganguly, whose experience of Bengal politics spans more than two decades. He adds: "The party’s high-handed conduct in the last two to three years is unmatched. The Stalinist approach has been clearly rejected. To regain lost ground, the most obvious first step would be to penalise the leadership at the centre and the state." Ganguly avers that both Prakash Karat and Buddhadeb are in the line of fire.

However, state industries and commerce minister Nirupam Sen told Outlook, "Our party does not function like other parties. We do not put the blame on any one individual. We take collective decisions and we are all collectively responsible for the consequences of these decisions. There are differences of opinion but it’s not mature to go into blame games." While Sen declined to comment on Buddhadeb’s offer to resign from the CM’s post, he said the party is not penalising the leadership for the poor performance.

So will Buddhadeb survive this pang of intense self-doubt? Will he be there in 2011?

"We cannot comment...it’s too early to say," Sen said. Meanwhile, in the party headquarters on Alimuddin Street, groups of workers sit in a huddle and in hushed tones discuss the past, present and future of the CPI(M). Eavesdrop and you get a sense of what was, is and could be in store for the party. "There was a time when he campaigned in the villages riding pillion on someone’s motorbike. He was so humble. What happened? He dared to do what Jyoti Basu didn’t in decades fearing the government would fall. He tried to take land from the people."

That the knives are out for Buddhadeb is an open secret.