Vajpayee's speech a day before the Babri demolition smacks of his complicity. Exclusive video clips: 1, 2, 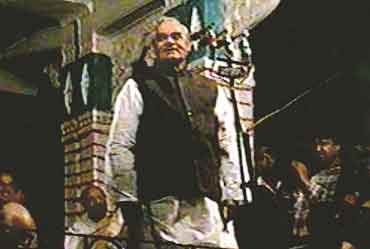 [Left click to play live on the net; right click and "Save Target As" to save the file to your computer]

December 5, 1992 "I don't know what will happen tomorrow.... I have been instructed not to visit Ayodhya and I shall abide by this. I have no wish to visit the court and get tried in any case." (Video Clip)

December 5, 1992 "The Supreme Court verdict does not mean we have to stop kar seva. Actually the court has given us the right to continue kar seva. Rokne ka to sawal hi nahin hai (there is no question of stopping)."(Video Clip)

The BJP's iconography usually presents L.K. Advani as the hardliner and A.B. Vajpayee as the liberal consensus- builder. He is packaged as the poet-politician, a man often out of sync with the inner core of his party, a man who never connected with the Ramjanmabhoomi agitation, who tried to clip the wings of Narendra Modi, who actually made a bid for Muslim votes.

Mere hagiography written to build up the man? For, the paradox that is Vajpayee is infinitely more complex. Outlook has accessed an intelligence video recording, now transferred to VCD, of a speech made by Vajpayee on December 5, 1992, the day before the Babri demolition, at Jhandewalan Park in Aminabad, Lucknow. A younger Vajpayee's body language is distinctly buoyant, his mood upbeat and strident, his tone sarcastic. There is no sign of disapproval of the huge gathering of kar sevaks he was addressing.

Vajpayee goes along with the mood of the crowd. "I have heard that because of the excitement of the kar sevaks and because of the large crowds already at Ayodhya, it has been difficult for many to even walk in Ayodhya." Then he adds: "I have been instructed not to visit Ayodhya and I shall abide by this. I have no wish to visit the court and get tried in any case. The court has also decided to give their verdict on December 11 (1992). I shall not criticise the court."

Yet, Vajpayee goes on to make his own interpretation of the court's instructions. "I will tell you the arth (meaning) of the Supreme Court verdict. It does not mean we have to stop kar seva. Actually, the Supreme Court has given us the right to continue kar seva. Rokne ka to sawal hi nahin hai (There is no question of stopping us). Tomorrow we will not be violating any court order if we perform kar seva. It is however true that the Supreme Court has ruled that till the Lucknow bench announces its decision, you people cannot do mandir nirman (construction)."

As Vajpayee points out (see below), there is no reference to the Babri Masjid in his speech as such. Yet, there are some curious words that are open to interpretation. "The Supreme Court has allowed bhajan-kirtan. One man cannot perform bhajan alone. And many people need to gather for kirtan. And kirtan cannot be performed standing up. How long can we stand?" Now comes the extraordinary punchline: "Sharp stones are emerging from the ground. No one can sit on them. The ground has to be levelled (Zameen ko samtal karna padega)."

Vajpayee's speech is laden with innuendo and imagery. "If a yagya begins, there will be some construction.... It is winter. There are those who have come from the south who are not used to this weather. For them a shamiana will have to be put up." Towards the end, Vajpayee declares: "I don't know what will happen tomorrow. " Pause. "I wanted to go to Ayodhya but I was told you go to Delhi." If this is indeed true, then Vajpayee was saved by the skin of his teeth. For, other BJP leaders who went to Ayodhya are still fighting to emerge unscathed from the most spectacular public crime in recent Indian history.

Missing the Ayodhya action was probably the best thing to have happened to Vajpayee.He would perhaps never have become prime minister if he had gone to Ayodhya.But as the CD reveals, Vajpayee may not have been active in the BJP's more controversial enterprises, but his complicity in some cannot be ignored.

Last year Mohammad Aslam, alias Bhure, one of the petitioners, moved an application in the Liberhans Commission (now in the final stages of preparing its much-awaited report on the Babri demolition) that Vajpayee should also be questioned for his knowledge of the larger conspiracy. The commission has yet to take a decision on Bhure's plea.

Last month the VCD was played before the commission in an entirely different context.Senior lawyer I.B.Singh, representing the former DM, SP and dig posted in Ayodhya during the demolition, played the tape before the commission. His line of argument was that there was nothing provocative in the December 5 speech of Advani made in Lucknow to alert the administration to the possibility of the demolition of the Babri mosque the next day. The CD also records Advani's speech that preceded Vajpayee's Lucknow speech. It then goes on to show footage of the large restive crowds of kar sevaks at Ayodhya. They carry pickaxes, hoes, shovels and ropes and are practicing "demolition" on mounds of mud. Voices are heard requesting the crowd to step back.

Perhaps they thought this would lead to a great Hindu awakening. But they were shrewd enough to know this would also tie them in legal complications. So there was a Plan B, a great backup scheme. One leader, a fine parliamentarian with cross-party ties, would be spared the mud that would rise at Ayodhya. In the event of assuming high office, he would be the chosen one. As it happened, Vajpayee was eventually "chosen" by Advani, the man who led the entire Ram movement.

It is a compulsive conspiracy theory. But there is not enough hard evidence to prove it conclusively. On the other hand, the evidence so far does not disprove it either. The Ayodhya imbroglio remains as open-ended and oblique as many of Vajpayee's statements.