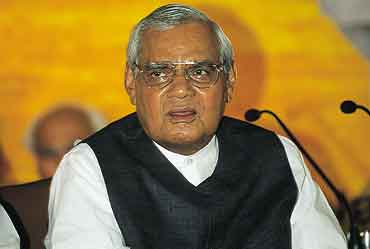 outlookindia.com
-0001-11-30T00:00:00+0553
Old speeches can cast long shadows. The publication of a speech made by A.B. Vajpayee on December 5, 1992, the day before the demolition of the Babri mosque, has opened up a can of worms for the ex-PM. The speech had been recorded by intelligence agencies and Outlook had published excerpts from it in the last issue (Hour of Janus, Feb 28).

Now, for the first time in his long and distinguished career, Vajpayee could find himself entangled in a legal web. Moves have begun to include him within the ambit of the Babri demolition probe by the Liberhans Commission and other criminal cases in various courts. Moreover, MPs from the Congress, the Left parties and rjd say they plan to raise the matter during the budget session of Parliament which began on February 25. 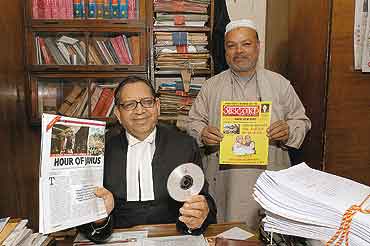 On February 24, lawyer O.P. Sharma, counsel for Mohammad Aslam Bhure, the original petitioner in all the Ayodhya cases, moved an application in the Liberhans Commissions seeking that Vajpayee be questioned for his knowledge of events leading up to the Babri demolition. Sharma, who attached a copy of the Outlook article and a VCD of Vajpayee's speech with his application, says: "Now with this evidence our case is strong. We have argued that since it's within the terms of the commission to name the leaders involved, Vajpayee must be summoned before it. We have said this speech shows Vajpayee was fully involved in the conspiracy to demolish the Babri mosque."

Top BJP leaders like L.K. Advani and M.M. Joshi have strongly opposed the move to summon Vajpayee before the Liberhans Commission. Filing a prompt reply to the application, Satya Pal Jain, counsel for BJP leaders, sought its dismissal and termed it as "misconceived" and "politically motivated".

The ex-PM's political opponents, however, don't agree. Congress spokesman Abhishek Singhvi, also a senior lawyer, told Outlook: "Prima facie the CD is equivalent to a smoking gun. It is significant as it implicates the former PM for the first time. The CD shows him true to his habit of assiduously cultivating an air of injured innocence which he had been exhibiting for the last decade and a half. At the minimum it requires an investigation. This exposure is a lesson to guard against the BJP's well-known digressive tactics of shooting the messenger while ignoring the message."

Meanwhile, within the Sangh parivar there has been a curious impact of the VCD. Some BJP workers believe it has actually enhanced Vajpayee's standing. Says a functionary at the BJP headquarters: "We now know he too has always been committed to the Hindutva cause though his position forced him to act like a moderate." 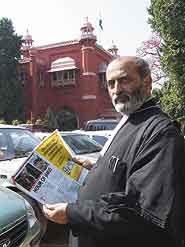 The Muslim bodies involved in the Babri cases, however, have a more straightforward response: they would like Vajpayee to be charged with criminal conspiracy to bring down the mosque. Says Qasim Rasool Iliyas, convenor, All India Muslim Personal Law Board (AIMPLB) committee on the Babri Masjid, "We have at long last found evidence that reveals Vajpayee's complicity. We cannot let him go after this kind of proof has emerged." Zafaryab Jilani, convenor of the Babri Masjid Action Committee (BMAC) and one of the main lawyers involved in the case, says they were always aware that both Vajpayee and Advani had made some speeches in Lucknow on December 5. "But we were never certain about what exactly they said. Now the CD exposed by your magazine has helped inform us about the exact contents and words of the speeches."

Jilani makes another point. Outlook had also published a response from Vajpayee in which he had said (after viewing the CD) that there was nothing that could be questioned legally in any of his statements. He also said the speech was made "in a certain context, a certain atmosphere".Now Jilani says, "Since the former PM has not been able to deny the CD's contents, the case against him gets only stronger.Earlier, despite knowing he was also involved in the demolition conspiracy we had no proof to make a demand to make him an accused in this case. After reading the contents of his speech, we have started discussions on making him an accused as well."

The BMAC is now waiting to hold discussions with their senior counsel—Anup George Chowdury and Siddharth Shankar Ray, who told Outlook: "I do not comment on issues which are political but I can say we should carry on with the case." Meanwhile, BMAC has already worked out a few options to keep up the pressure. They could, for instance, exert pressure on the CBI to investigate Vajpayee. To do so they may approach the courts (the apex court or the Allahabad high court or the special court at Rae Bareli) to direct the CBI to investigate the matter in the light of the CD. Yet, as Jilani says, "It is now a test for all secular parties as to how much pressure they can exert on the CBI who have so far committed the mistake of ignoring the CD and protected Vajpayee for over 12 long years."

UP Congress leader Pramod Tiwari believes the "law should take its own course now that the CD has exposed Vajpayee". Says he, "The Sangh parivar wanted one moderate face and they worked on Vajpayee. He only plays the role parivar seniors write out for him."

While all the so-called secular parties say the ex-PM stands exposed, UP chief minister and SP leader Mulayam Singh Yadav has no desire to join the pack. He told Outlook: "I'm too busy with the budget. Talk to me about such things some other time." A curious stand for the leader of a party that has considerable Muslim support. Pushed to a corner by the belligerence of the Congress high command, is Mulayam reluctant to ruffle feathers in the BJP? Tiwari certainly thinks so: "Why are you surprised? Don't you know Mulayam and Vajpayee have a great understanding?"

Vajpayee's innuendo-laced speech about demolition, yagya and construction has certainly given his enemies a weapon to dent his image. The Ayodhya ghost has caught up with him at last.