A massacre of strays is not the answer 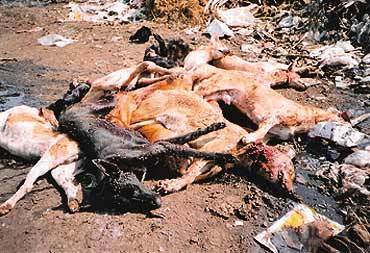 outlookindia.com
-0001-11-30T00:00:00+0553
The death of two children in Bangalore on January 10 and March 1 following attacks by stray dogs should never have happened. While the upsurge of public shock and anger over both incidents is entirely understandable, one needs to remember that the grief of the children's families would have been as intense, and their deaths as tragic, had they been electrocuted following contact with live power cables left exposed by the negligence of the Karnataka State Electricity Board.

Such accidents have led to mob violence in the past but never to the systematic, government-led destruction of power generation and transmission equipment or lynching of power department officials on the ground that they threatened human life. One would, doubtless, be told that such a course would paralyse life in the state, damage the economy and inconvenience people.

What is, sadly, not well understood is that the mass killing of stray dogs that the municipal authorities of Bangalore and Mysore have launched in the wake of the deaths, with active encouragement from the state's health minister, is also a disastrous step.

It has scuttled the successful and widely-hailed Animal Birth Control (ABC) programme in Bangalore, which had, according to one estimate, brought down the stray dog population from about 2,00,000 to nearly 50,000 in the five years preceding '06. The four NGOs involved in the programme—Compassion Unlimited Plus Action, Karuna, Krupa and Animal Rights Fund—have decided to withdraw from it following the municipal corporation's action.

The consequences will be disastrous. The WHO has repeatedly pointed out that stray dog populations can only be thinned out through the successful implementation of the ABC programme. Under this, dogs are neutered, vaccinated against rabies and returned to the streets; And the solid waste that many strays subsist on is effectively disposed of.

Killing will prove counter-productive. The who also points out that killing has never reduced stray dog populations because they breed faster than the highest-ever recorded rate of killing.

In Bangalore itself, the corporation's strategy of electrocuting stray dogs and administering neural anti-rabies vaccine to pet dogs had led to the slaughter of 25 million stray dogs between 1936 and 1999. But their population and the incidence of rabies continued to rise.

Furthermore, the massacre of stray dogs has diverted attention not only from the corporation and the state government's criminal neglect of garbage clearance and expansion of civic amenities to match Bangalore's rapid growth, but also from the need for a thorough investigation into the circumstances of the attacks that killed the two children.

This is most unfortunate, because there are unanswered questions.

One has heard of Rottweilers killing kids, but Indian stray dogs are known to be protective toward children and people. On May 25, '96, a Calcutta daily, Aajkaal, front-paged the photo of three of them guarding a new-born baby abandoned near a dustbin in the city on the night of May 23. The report said the dogs had protected the baby throughout the night without even going to forage for food themselves. They left only after the child was taken to a home. We need to know what went wrong in Bangalore.

(The author is a senior journalist)