Hot Under The White Collar

As the US presidential race heats up, India and outsourcing become favourite targets 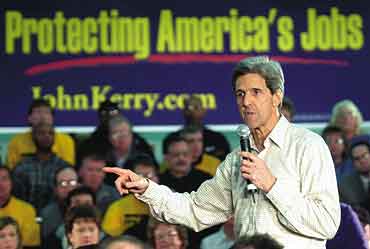 outlookindia.com
-0001-11-30T00:00:00+0553
This American election has a third-party candidate—India. What's happening in Bangalore and Hyderabad has created tremors in Ohio and New Jersey, making outsourcing a red-hot campaign issue. Such is the wattage that every time anyone utters the word, the White House skips a beat.

It has skipped many lately, trying to defend free trade in the tornado of protectionism currently lashing the mainland. The battle-charged Democrats are pounding President George Bush for "exporting" American jobs while raining half-baked bills in the US Congress. Frontrunner John Kerry, who is married to the Heinz ketchup heiress with a $550 million fortune, is all upset about small call centres out there in Gurgaon. He wants Americans living in America to answer those calls. Jobless Americans are writing to agony aunts, asking if they should move to Bangalore.

India looms large in the debate, in the muddy mixture of raw emotion and political opportunism. Its crop of eager IT graduates is seen overwhelming white-collar workers from Sacramento to Dayton, from Seattle to Boston. There they are, glued to their computer screens, working endlessly on low wages and slowly stealing American prosperity. The names of Infosys and Satyam have begun to roll off TV anchors' tongues as easily as ibm and Microsoft. They are all villains in the epic battle where the good guys are forced to sell their SUVs, retrain as construction workers and lop off their lifestyles. The camera cuts to the steel-and-glass building of Wipro, its subsidised cafe, its serene yoga classes and the cheerful brigade of tireless Indians. India 'shining' has acquired a different meaning.

A barely concealed racism underlines the web war on a hundred sites. "American white-collar workers are going to fight against offshoring with their votes. A jobless, highly educated and angry voter doesn't give a rat's ass what you and the other windbags at consultancies like McKinsey or Gartner have to say," rails a letter to Fortune magazine. The wrath extends to Indian techies who come on H-1B and L-1 visas, in many cases training under Americans they later displace.

Marcus Courtney, president of WashTech Alliance, the original noisemakers on outsourcing, believes Indian corporations are spending "billions" of dollars to "encourage offshoring". He says they are developing partnerships, building alliances, gaining access to local governments in various states. In other words: marketing their wares. When quizzed, he brings his "billions" down to "millions". But this is the tempest of tempers in which American politicians will garner votes. International trade is a bad word this election, outsourcing its nastiest subset. Everything is cast in my-loss-is-your-gain terms, as if suffering began here and is limited to American workers.

Forget the India Caucus coming to defend outsourcing, its 170-odd Congressmen members are running to guard their home turfs. Congressmen Sherrod Brown of Ohio and Frank Pallone of New Jersey, two of India's loyal friends on Capitol Hill, are vehemently against outsourcing. Last week, Brown spoke about Ohio's jobless, talking of workers' rights and how they must "share in the wealth they create". He sounded positively Marxist. Joseph Crowley, the current co-chair, says it's hard for any legislator to defend outsourcing today. "At the same time, I recognise we are in a global economy. I am concerned by this trend of India-bashing," he told Outlook. But he quickly adds that India could help its case by opening up more. "It has to be a two-way street. India can reduce tariffs and Indian companies can invest in the US as the Japanese did." 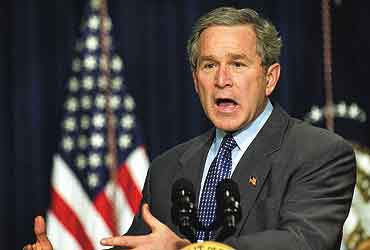 The gathering threat from a tepid economy has made Bush vulnerable, evoking nightmares of the familial past.The economy tanked his father's bid for a second term despite his success in sending Saddam Hussein packing from Kuwait. For the son, both the war and the economy look messy. The White House fumbled twice last month over the jobs issue, giving the Democrats lethal ammo. First, Bush's top economic advisor, Gregory Mankiw, decided to speak as an economist, not a politician. While releasing the annual economic report, he said jobs moving overseas were "probably a plus for the economy in the long run". A bolt of lightning struck the White House. Mankiw, a Harvard professor, was asked to eat his words in public. Bush swiftly distanced himself saying, "There are people looking for work because jobs have gone overseas."

Then came the administration's overly rosy prediction of creating 2.6 million jobs this year. Bush disowned the figure even though he had signed the report, going instead for a lame "I think the economy's growing and I think it's going to get stronger". The Dems couldn't believe their luck—the disarray in the White House was evident on the one issue that Americans care most about. In a recent survey, nearly 79 per cent Americans said they consider the economy most important. "The Republicans are feeling the heat. They don't have a gameplan," says Catherine Mann, a senior fellow at the Institute for International Economics.

The Democrats are using thinly veiled metaphors— "foreign" workers and "cheap" labour—to whip up advantage. Senator Kerry, the putative Democratic Party candidate, went full barrel against bosses who send jobs abroad, calling them "Benedict Arnold CEOs" in a reference to the hero-turned-traitor of the American war of independence. Kerry wants the traitor CEOs' incentives cut, tax loopholes closed, profits monitored. He has introduced a bill demanding that call centre employees identify their locations, one of the many efforts to penalise companies. He says Bush is "on the run" because on his watch the country has lost 2.2 million jobs. What he forgets to mention is that outsourcing accounts for less than 10 per cent of that figure.

But the original anti-outsourcing bill, banning outsourcing of federal contracts overseas, which is now signed into law, was sneaked in by a Republican senator. George Voinovich from Ohio cleverly misled Indian diplomats into thinking his bill was narrowly targeted to a few programmes in one department but it emerged that politicians would interpret it broadly. He was thinking ahead—cashing in on a wave of anger which many in the Indian establishment were slow to recognise. As India's lobbyists struggled to track the manoeuvre in the legislative sausage machine on Capitol Hill, he scored a big hit for Ohio, a battleground state in the election. It has lost 2,70,000 jobs since Bush took over. 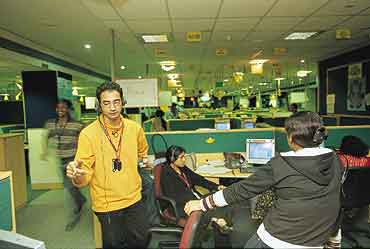 Loaded words, simplistic soundbites and a formidably ahistorical view of international trade, which for decades has been stacked against the developing world, are defining the debate. Dozens of reporters are on the job to "expose" the migration of jobs. Those specially endowed have even called it the "shoveling" of jobs abroad. India has joined the ranks of other big job thieves—Japan, China and Mexico.

cnn's Lou Dobbs is on a crusade against companies that outsource jobs, naming nearly 300 of them on his 'Exporting America' list. No surprise then that the self-important anchor is gaining fans for his xenophobic journalism. Everyday his reporters dig up details about Indians preparing tax forms or medical bills or reading X-rays, quietly displacing American workers. Dobbs then badgers his guests who might defend such cost-saving practices. Some see a cnn ratings war with Fox, the more 'patriotic' network, complete with the US flag. James Glassman, a resident scholar at the American Enterprise Institute and a technology columnist who recently appeared on Dobbs' show, calls him "a table-thumping protectionist".The print media is more balanced by comparison but the breathless coverage is making India into a bogey. Kerry and co know they can get more coverage feeding the machine.

"Since Herbert Hoover, presidents of both parties have stood for free trade. For the first time, Democrat candidates are behaving like irresponsible protectionists. I'm very alarmed by it," Glassman told Outlook. He adds that he's "overjoyed that India is entering the global economy—it is time for celebration. I defy you to find a single reputable economist to say that outsourcing is a bad thing". The trouble is, economists are unwanted in this debate because one side is manned by the unemployed 7 per cent and the other by politicians who claim to represent them. No one cares for the big picture when the little guy is hurting. The US economy is $11 trillion and in such a large economy, shifts happen—both structural and cyclical—but it's hard to push such facts.

Catherine Mann says the globalisation of IT will lead to the next wave of growth as IT diffuses to new sectors in the US but her paper doesn't get cited as often as the scare-mongering statistics offered by Dobbs. "What is happening today is a confluence of the electoral cycle, the business cycle and the structural changes in IT-related areas. Outsourcing is a subset of the fight on international trade," she said in an interview.

Those who try to explain outsourcing as the age-old way of doing things (why produce yourself when someone else can do it cheaper?) are immediately spotted, linked and bombed with hate-mail. David Kirkpatrick, a Fortune columnist, was so chastened, he wrote a second piece tempering his views. Here's one mail bomb he got: "I want to find a political party or movement that will try to save American jobs. I am ready to vote for the Communist Party, the Nazi Party, or whatever it takes. The system we have now is killing me...if an enraged laid-off American engineer were to go up to his Indian replacement and shoot him dead, if I were on the jury the verdict would be not guilty."

The nationalist rhetoric flooding the airwaves is alarming, says Chris Edwards of the Cato Institute. "This political debate is a replay of the late '80s when Japan was the big devil." It appears to be India's turn this season.