Sooner or later we will have to go in. Today, we are not ready, a second chance will come. Diplomatic hot air won't prepare us.
Free Speech: What do you think?
Facebook Twitter Google + Linkedin Whatsapp 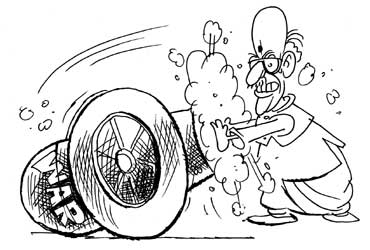 outlookindia.com
-0001-11-30T00:00:00+0553
There is a belief that the armed forces are ready and raring to go. They are being kept on a leash by the political authority. We are about to do 'it'. Much cold water needs to be poured on all these theories.

It is true that the armed forces are structured for war. But hot pursuit is not war. It is more like a surgical strike, sometimes overt and sometimes covert, and usually done by one party confident of smothering any subsequent escalation or counter-strike. In reality, there is no actual international law that 'permits' hot pursuit across international borders.There are only precedents. Massive Israeli strikes against the PLO in 1980 were justified by Tel Aviv on the grounds of hot pursuit. The subsequent protest in the UN by 52 nations of the OIC and the Communist bloc were simply trashed by Israel. Iran destroyed Iraqi Kurdish settlements in 1996 citing hot pursuit but Teheran had learnt its lesson from the Americans who destroyed an oil rig, an Iranian frigate and four gunboats in 1988 in Iranian territorial waters, citing hot pursuit.

Hot pursuit has been defined in international law in limited areas but not in circumstances that are of any help in Kashmir. What is of use is Article 51 of the UN charter on self-defence which, if combined with the international 'precedent' of hot pursuit, could keep both diplomats and lawyers busy for years.

In 2001, the Indian armed forces are simply not structured for hot pursuit against Pakistan. Sad, but true. In early 1991, the services' teaching schools were increasingly absorbed with anti-terrorism. Some predicted the end of war as we know it, others argued against fiddling with conventional force structures. To confuse everyone, the Revolution in Military Affairs had just begun. In 1994-95 we had beaten the indigenous Kashmir terrorist movement but we little knew that Osama bin Laden, recently thrown out of Sudan, had taken up residence in Peshawar. From 1995-96 onwards, the insurgency in Kashmir worsened.

At this stage, we missed the boat. The militant organisations in Pakistan decided that an exchange of casualties between 'foreign' militants and Indian soldiers was acceptable. We agreed and, instead of changing the parameters of the conflict, we permitted the ISI to fight on our soil. We didn't change our strategy nor our force structure, nor our acquisition plans. We did not consider cross-border attacks, reprisal and incendiary raids, air attacks, night commando raids, eliminations and kidnapping of militant leaders, liquidating ISI agents in third countries, eliminating important private donors, nor did we look at attempting to kill or capture those who had openly decided to wage war against the Indian state, merely because they lived in another country.

Why did this happen? The same old chestnut actually; there was no organisation in the country that could think of it, at the politico-military level. The National Security Council had not been formed and all we had was the committee of secretaries, which if anyone has attended a meeting of, would make strong men weep. But this time, the armed forces have their own share of blame in not reacting to the changing nature of the threat to the state. A re-appreciation would have generated the need for new weapon systems and sensors, which would have been in place today if some structured thinking had taken place. More importantly, some integration of forces would have occurred.

Consider what are the things we can't do today. The navy has a competent force of marine commandos but only three helicopters to transport them in—a total of 40 men, inadequate without a joint army-air force contribution. But now we are in deeper trouble. The army has its own army aviation corps but no helicopter that can carry more than four men. And now the appalling news—between the three services, we cannot muster one helicopter that can fly low over rough terrain on a dark night, and this is three years after Kargil where this inadequacy was thrown up starkly.

And why should this be so? Because the army has the commandos and the air force has the helicopters. The army needs to fight at night but air force helicopters need to fly only in the day. Navy helicopters can fly over the sea at night but not over land. Should the commandos get to their targets and need an airstrike, as in Afghanistan, they don't have the gadgetry. The laser-guided bombs with the air force use laser designation from their own aircraft, as in Kargil.

The idea that deep-strike special forces commandos will designate targets for the air force in enemy country during peacetime to destroy non-state actors has never been an Indian concept, never been exercised and we are now, frankly, unprepared for the right kind of action against Pakistani non-state actors. But above all, we lack the one weapon platform that would have given us the edge in both the strike and in smothering the riposte that would inevitably follow: AWACS. The absence of an AWCAS is yet another ghastly tale that goes back 15 years and a series of bungles.

We need to do two things right away. Most of the bits and pieces are already there but not integrated. Form a Special Operations Command, as a separate command under the newly-created vice-chief of defence staff with the clear mandate of launching special forces attacks beyond our borders, and with its own financial advisor. Allocate to it units from the army, navy and air force and give it three months to be ready. The Parliament attack is not going to be the last such attempt.

Second, put an AWACS in place, even if it is an Israeli one and the Americans refuse to transfer one on lease or loan.

At the diplomatic level, we need to focus on one issue. The Americans have asked us repeatedly what we want in the fight against terrorism, as a counter to the aid, both financial and military, that Pakistan will get. The answer is, the AWACS.

Sooner or later, we will have to strike into Pakistan against non-state actors. Today we are not ready, a second chance will come. Diplomatic hot air won't prepare us for the next time around.

'WTC Could Have Been Repeated Here'