Hostile speeches and abusive ­remarks, it is now pervasively believed, can make or break electoral verdicts. Whenever rival politicians indulge in a war of words, the public avidly tallies who ‘won’ or ‘lost’ each round. 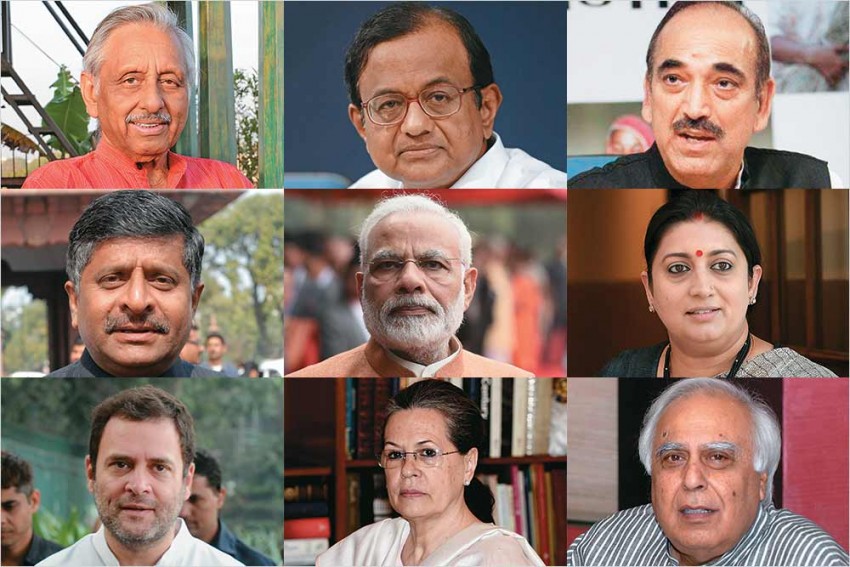 Aiyar calls Modi “neech kisam ka aadmi”. Remark ‘backfires’ with the BJP painting it as a caste slur. Aiyar forced to apologise, ­suspended from party. Modi says Congress has “Mughal ­values” which have taught it to “demean castes”.

Modi accuses former PM Manmohan Singh of meeting Pakistani officials to plot against his government. “What is the reason for secret meeting with Pakistanis?” Modi asks at Palanpur rally in Gujarat. Rahul says Gujarat elections should focus on the state, not “China and Pakistan”.

Congress MP Anand Sharma tweets about Modi: “India had to suffer when an arth-shastri PM was replaced by a prachar-shastri PM”.

Kapil Sibal says of PM Modi: “He has given up Hinduism and adopted Hindutva.”

Youth Congress mouthpiece YuvaDesh publishes a picture of Modi mis-pronouncing ‘meme’ as ‘me, me’ in Hindi and being admonished by UK PM Theresa May to “sell tea”. Modi counters saying he “sold tea but not the nation.”

BJP MP and actor Paresh Rawal adds by saying, “Our chai-wala is any day better than your ­bar-wala.” He later apologises for the remark.

While addressing a rally in Kangra in Himachal Pradesh, Modi refers to the Congress as “deemak” (termite) for the ­second time.

Congress’ social media campaign in Gujarat says “vikas (development) has gone mad”. Modi retorts, “Every Gujarati feels I am Vikas, I am Gujarat.” Rahul, then Congress vice-president, calls off the campaign. Modi says the Congress party has hatched a “conspiracy” to send him to jail.

“Congress vikas ke naam par bhaunkti hai—Congress only barks in the name of dev­elopment,” he adds.

Modi says Manmohan Singh “knows the art of bathing with a raincoat on,” implying that corruption charges did not stick to Singh but he was ­corrupt nonetheless.

Modi asks for 50 days to ­successfully ­implement dem­onetisation after which people can punish him whichever way they want on street corners if the scheme is not ­successful, he says. In January, 2017, Congress leader Ahmed Patel says, “It is time people pick a street corner and punish the PM.”

Rahul Gandhi, while campaigning in UP uses ‘khoon ki dalali’ epithet against Modi in the context of him using the sacrifices of soldiers for political gains. The remark captures much attention but ‘backfires’, as Gandhi is accused of not taking soldier deaths seriously.

Modi says in Kerala that not he but an “Italian court has found Sonia Gandhi connected with” the graft-tainted AgustaWestland chopper deal. The Congress response: stalling Rajya Sabha and the slogan, “Pradhan Mantri jhoota hai (The PM is a liar).”

Modi says, referring to Sonia Gandhi: “Do you have anyone you know in Italy? Do you have relatives in Italy? Have you been to Italy? Does anyone know you in Italy? Everyone knows who has an Italian connection...”

Sonia Gandhi retorts: “I was born in Italy. It is in India that I will breathe my last and it is here that my ashes will ­mingle with those of my loved ones...cannot expect the PM to ­understand these feelings…I was born to proud and honest ­parents. I will never be ashamed of them.”

Rahul says in Gujarat that the Modi government is “destroying creativity” through the “RSS model of education.”

Soon, Textiles Minister Smriti Irani retorts at Amethi that Rahul is a “liar” and the Cong­ress ­ignored its constituencies.

Rahul says nobody will come charging on horseback to solve India’s problems. Congress spokesman at the time, Rashid Alvi, says Gandhi was not referring to Modi. “Else, he would have said buffalo, not horse.” Buffalo is considered the mount of Yamraj, the Hindu god of death.

Modi says he will give up calling Rahul ‘shehzada’ if the Congress discontinues ­“dynastic” rule. Some Bihar BJP leaders protest that their own party is guilty of promoting dynastic succession in the state.

In the run-up to the Chhattisgarh polls, Modi calls the Congress symbol “khooni panja—bloody claw” and “zalim haath—cruel hand”. Congress complains to the Election Commission. Sonia, while campaigning in Karnataka, says the BJP does “zeher ki kheti—reaps poison from fields.”

Mani Aiyar says, “Narendra Modi will never become Prime Minister of the country but if he wants to distribute tea here, we will find a place for him.” This remark, too, ‘backfired’, with Modi ­labeling Congress as having a ‘feudal mindset’.

Modi campaigns for Chhattisgarh elections while Sonia Gandhi’s cancer diagnosis is ­rumoured. “Agar madam beemar hai to bachche ko kaam do. Madam, if you are ill, let shehzada take over,” he says, referring to Rahul Gandhi. He also asks Rahul if the funds for Chhattisgarh come from his “mama’s (maternal ­uncle’s) house”.

Sonia says the BJP is a party of “poisonous people.” Modi says that since Sonia has referred to power being poison, and as the Congress has had the longest stint in power, therefore it is the “most ­poisonous party”.

Rahul says while electioneering in Rajasthan that the BJP instigated communal riots in Uttar Pradesh. The BJP complains to the Election Commission.

Modi cites over 8 per cent growth rate of Indian economy during NDA rule in the early 2000s. Then Finance Minister P. Chidambaram calls the UPA’s first term a “golden” phase of growth. “I wonder why Shri Narendra Modi should stage a fake encounter with facts,” he says.

BJP leader Ravi Shankar Prasad ­retorts that India’s economy grew despite drought, the Kargil war and the East Asian crisis at 8.5 per cent during the BJP’s term. “I want to ask the FM why he is lying.”

Salman Khurshid, ­another former Congress minister, had described Modi as a “frog who has just emerged from a well”. In turn, BJP’s Meenakshi Lekhi called Khurshid a “cockroach” who would survive Pakistan’s nuclear attacks.

Campaigning as PM-aspirant, Modi calls Manmohan Singh “night watchman” and “puppet of the Gandhi family.” He also says, “If you want to rid India of the deemak (termite) that is Congress, the ideal medicine is the paseena (sweat) of BJP.”

Mani Aiyar calls Modi “paani purush—man of water” while the BJP cultivated his image as man of iron or “loh purush”. He also calls him Ravana and “asatya ka saudagar—a merchant of lies”.

Gujarat Congress head Arjun Modhvadia says a “monkey” cannot challenge a tiger, referring to Modi and former PM Manmohan Singh. Modi turns this remark around to recast himself as “Hanuman” while the BJP files a complaint with the Election Commission.

Modi says that he asked 20 random shopkeepers and all said they would not even hire Sonia Gandhi “as a clerk” and Rahul Gandhi as “driver”.

Sonia Gandhi’s infamous ‘maut ka saudagar—merchant of death’ barb against Narendra Modi, then chief minister of Gujarat, emerged during Navsari election campaign. Later, there were claims that it polarised Gujarati voters in ­favour of Modi.

Modi says at an election rally in Patan that the Congress symbol used to be the cow and calf and people used to say gai (Indira Gandhi) and vacchharado (Sanjay Gandhi) are contesting. Now, farmers tell me a hybrid calf has come to contest the elections.”

In A Migratory State