Beginning as a box-office underdog, 'Gadar', because of its jingoistic idiom, has appealed to the prevailing mood and become a super-duper hit 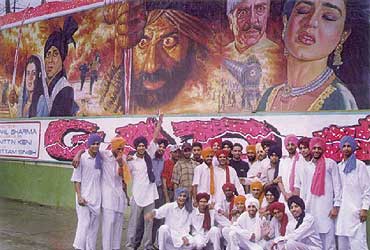 outlookindia.com
-0001-11-30T00:00:00+0553
One just needs to stand outside a cinema hall to gauge the success of a film. Houseful boards, the throng of families trying to jostle their way in, long booking-counter queues and manic scalpers offering to get you the best of seats in the balcony—scenes of a filmi frenzy that you thought had gone out of fashion. The euphoria is palpable, in fact, it only gets magnified once the reels unspool in the 70 mm darkness. "Baap baap hota hai, beta beta hota hai... Beta baap se nikalta hai... Hindustan Pakistan ka baap hai..." The hero's comic sidekick thunders these brazen lines. The audience reciprocates with cheeky wolf-whistles, deafening claps, loud catcalls and roars of approval. Welcome to Gadar—Ek Prem Katha, the millennium's superhit clarion call to patriotism.

Till yesterday the film had been the quintessential box office underdog. Gadar's Rs 18-crore flashback to the Partition got somewhat dwarfed by the Rs 25-crore epic sweep of Lagaan's cricket at Champaner. Uttam Singh's tepid music provided no competition to A.R. Rahman's inspired compositions. Worse, Sunny Deol's fading charisma couldn't stand up to the media blitz unleashed by a savvy Aamir Khan. What's more, Gadar was sold at about Rs 2.75 crore per territory to Lagaan's more reasonable average of Rs 2.25 crore.

But after almost two weeks, Gadar seems to have a clear edge at the box office (see infobox). While it's early days yet to club them with the all-time blockbusters, the films have all the makings of one, having connected with the audience in a way that Kaho Na Pyaar Hai did one-and-a-half years ago. The other semi-hits of the year, Jodi No. 1 and Mujhe Kuch Kehna Hai, have overnight become as stale as yesterday's leftovers. They're calling Lagaan "lambi race ka ghoda (the long-distance runner)", but it's the success of Gadar—kept in the headlines by a controversy that's still unspooling—that's the surprise. While the media and the filmdom itself has fallen hopelessly in love with Lagaan, it's Gadar that seems to be emerging as the distributors' favourite. Outlook talked to the well-known trade analysts and the verdict has been unanimous: it's a close duel in which Gadar could become the bigger blockbuster.

The trivia-gatherers have a little nugget to offer on this much-celebrated match. Aamir and Sunny have had two similar outings together. First time it was a case of Aamir's Dil pitted against Sunny's Ghayal. Then Raja Hindustani crossed swords with Ghatak. While Aamir had been ahead in the earlier bouts, this time it's Sunny who has taken the lead. In fact, Gadar might be Sunny's biggest hit till date, bigger than Border and Ghayal.

To be fair, Lagaan's slightly lower collections are also because it has only three shows a day as against Gadar's four and the timings of the shows are also proving to be a bit inconvenient for the viewers. Nonetheless, Gadar's success in some pockets has been unbelievable. In Nizam, Hyderabad, a Muslim-dominated area, the film had a remote chance of making it, so the run began with a mere 10 prints on Friday. However, by Monday, the prints had to be upped to 12 and by Thursday 14 prints were in circulation. "In Punjab the occupancy has been 140 per cent with the theatre owners putting up extra seats and sofas to accommodate the overflow," says Amod Mehra, a trade analyst. "It's creating havoc, going over-capacity in East Punjab territory," says Komal Nahata, editor of Film Information. According to Taran Adarsh of Trade Guide, in Punjab Gadar is set to surpass the run of the biggest hit Hum Aapke Hain Kaun.

While Gadar has set north India afire, Lagaan has hooked the spectators in the west and the south. In upmarket halls like Delhi's pvr Anupam and Priya, the clash of audiences is not so pronounced. Both are faring equally well with the young people going in for Lagaan and the older lot preferring Gadar. The overseas market is more Lagaan-inclined while Gadar's hold has been very pronounced in the small towns. Bareilly is a classic instance. According to Trade Guide, Lagaan could log in only 40 per cent collection here to Gadar's 84 per cent. Similarly, in Bhilai Lagaan mustered 62 per cent collection while Gadar lined 99 per cent. "Lagaan is the film of the gentry, Gadar is for the masses," says Mehra. "Lagaan is working better in the A grade centres while Gadar is faring better in B/C class cities," says Nahata. According to Mehra, in the long run, Gadar is likely to rake in about Rs 7-8 crore from each of the five major territories in the country with Lagaan making about Rs 5-6 crore. Incidentally, hahk has the record of raking in the most moolah with an awesome Rs 50 crore in earnings.

So what's the fuss all about? While Lagaan's cinematic quality shines through, the peculiar tug of Gadar is slightly difficult to reconcile with given the fact that it is one of the most aesthetically challenged films of recent times starring a histrionically challenged hero. But Bollywood, like its movies, has easy explanations for its success stories. "It's the action climax which has clicked. After a long while we don't just have gunfights and car chases but raw fist fights," says Mehra. "It's the content and the massive scale of the film," explains producer Nitin Keni of Zee Telefilms, the moving force behind Gadar. "Maine Pyar Kiya brought in a barrage of love stories, with hahk came the family films, with kkhh youth became the flavour of the day. Gadar has brought in a new story and a new way of story-telling," says Adarsh. This novelty, however, is less about stirring the dormant imagination than about appealing to the collective gut which is currently obsessed with the national (read communal) counterpart. Says Vinod Mirani of Box Office: "It has appealed to people's mood. Our guy just picks up his girl from under their noses and scores over the Pakistanis."

At the outset, what wins the day for Gadar is a potent packaging of mush and jingoism masquerading as patriotism. The first half of the film is nothing more than a soft-focus romance between a rough and tough but good-at-heart and musically-inclined truck driver and the coy, beautiful, vulnerable and waif-like Ms Goody-Two-Shoes heroine, who also happens to be a rich Muslim—a token coming together of two communities in strife-ridden times. Never mind the obvious lack of chemistry between Sunny and Amisha Patel (who looks young enough to be his daughter), the relationship is too cloyingly sweet, pretty and ponderous to hold the viewer's interest, its ostensible political correctness notwithstanding.

What ignites the viewers is the second half, a lethal brand of nationalism built on hatred and a patriotism in the form of unbridled violence—not just physical but linguistic as well. Gadar is a cunningly manufactured film. One which desists from saying anything negative about the Indian Muslims. Instead, the battle is pitched against the Muslims on the other side of the line. "The common Indian Muslims are taking to it because the Muslim girl is protected by the Sikh and he is even willing to convert to Islam," says Mehra.

Perhaps that's the reason why the protests against the film appear to be so misplaced. Clearly, the protesters are holding the wrong end of the stick here. The umbrage at the heroine being called Sakina and objecting to the scene where she offers namaaz while wearing sindoor is too facile and lends further credence and legitimacy to Gadar's jingoistic game. "When a film is successful everyone wants to use it to their advantage," says Keni. Latest to jump into the fray is Shiv Sena supremo Bal Thackeray himself. In a report carried in the party mouthpiece Saamna, he gave a clean chit to Gadar finding nothing provocative in it. He said the protesters (from their organisational mirror image, Ali Sena) "should be kicked out of the country". He further wrote that when the protagonist is forced to say "Pakistan zindabad", a section of Muslims in the audience applauded—his version of the Tebbit test which he has employed in the field of cricket earlier.

Fact is the protests are working in the film's favour. Its success is a shot in the arm of the new, emerging genre of patriotic films that play on the animus against Pakistan. From the stodgy and cardboard Bharat of Manoj Kumar to the panoramic and pretty 1942, A Love Story, Roja and Bombay, patriotism has now moved on to represent a duel between "them" and "us". Border, Pukaar and Sarfarosh played on the same sentiments, but while their messages were reluctantly concealed, with Gadar the anti-Pakistan rhetoric gets a blatant new idiom that strikes an immediate chord with the masses. Sample some gems: "Hindustaniyon, kaatna humse seekho," says one rioter. "Kis Pakistan ki baat kar rahe ho. Agar humne tumhe 65 crore rupaye nahin diye hote to tumhare sar par tripal nahin dalti," roars the hero.

According to film critic Deepa Gahlot, jingoistic tendencies started creeping into Hindi films "when terrorism raised its violent head". "The horrors of cruel and random killing of innocents needed to be presented in a manner that would serve to console a disturbed national psyche. And that meant the home side always had to triumph and cause the other side maximum damage," she writes.

There's no room for shades of grey, the portrayals are completely black or white. Pakistanis are villains and traitors, a Pakistani woman seems to know nothing more than producing a huge brood of kids. And our hero is the quintessential Indian, one who has forgotten the hatred for "them" and moved on. He never initiates violence but is forced to retaliate when provoked by the enemies. He is willing to embrace Islam, say 'Islam zindabad', even 'Pakistan zindabad' but when they coerce him to say 'Hindustan murdabad', he can't help but uproot the nearest handpump and turn into a demolition man, an act that's sure to give Arnold Schwarzenegger and Sly Stallone an inferiority complex.

"The film exploits hatred commercially. It does not have any element of courtesy," says film critic Shreesh Mishra. While defending the right for Gadar to be screened, actress and MP Shabana Azmi says she found it provocative. "It subliminally reinforces the canard that any Muslim is automatically a Pakistani. It confuses issues of nationalism, religion and identities," she says. Keni feels that Gadar doesn't take any potshots at Pakistan or at Muslims. "It's pro-India. Can't I say Hindustan zindabad in my own country? We have been far too defensive about this for far too long," he says.

At a time when President Pervez Musharraf comes calling, Gadar shows that the ghosts of Partition have still not been laid to rest.They continue to haunt us in new shapes and forms.