Horseman Of The Apocalypse

Suicide bombers run amok in Pakistan. Call it an implosion of vengeful jehad. 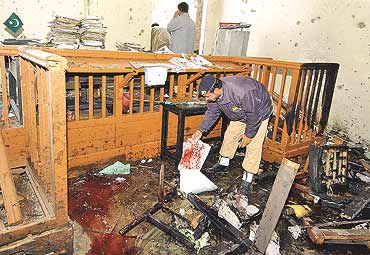 Not long ago, human bombs were mere puzzling headlines for Pakistanis, a part of stories of death and destruction emanating out of troubled West Asia. Then America swaggered into neighbouring Afghanistan, and Pakistan personally experienced the mayhem a person strapped with explosives could unleash. On March 17, 2002, Pakistan had its first tryst with suicide-bombing: a man exploded himself in a church in Islamabad's diplomatic enclave, killing five. From then till February 17 this year, there have been 27 suicide bombings, according to interior ministry data, claiming 447 lives and injuring 824. That 10 of these should have occurred over the last 30 days is enough to convince you there's a veritable epidemic of human bombings—and bloody miseries.

There's no unifying theme to these bombings other than the avowed aim of purging the 'land of the pure' of forces representing the infidel. But the definition of the infidel is an ever-growing one, encompassing in the circle of hatred anyone whom the bomber, or his or her group, considers impure—from Western and American citizens to 'heretical' Shias to those Pakistanis assisting Washington's war on terror, including the Pakistani army and police and Musharraf and his men. Investigative agencies fear such incidents will only increase as wintry days evanesce into spring and the Taliban launches a fresh assault in Afghanistan. The blowback from there is expected to singe and kill Pakistanis.