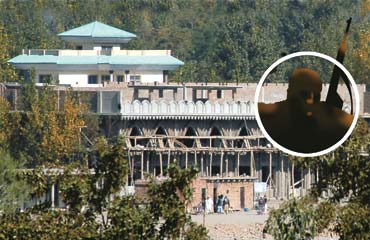 Leading the charge against the Pakistan army and fast emerging as its nemesis is Maulana Fazlullah, who heads the banned Tehrik-e-Nifaz-e-Shariat-e-Mohammad (TNSM), or Movement for the Enforcement of Islamic Shariat. In Pakistan, though, he has become famous as Maulana Radio, earning this sobriquet for the illegal FM radio channel he operates. Through his broadcast, yet another example of anti-modernity forces using modern means of communication to spread their antediluvian ideas, Maulana Radio has been inspiring followers to implement Islamic Shariat, fight the Pak army, and establish the authority of Islam. The 1.6 million people of Swat district tune in to listen to him, his popularity surpassing that of any Pakistani DJ.

Fond of riding a black steed and always sporting a black turban—his followers are actually called Black Turbans—Fazlullah, 32, has never had his photograph taken, believing that Islam forbids taking pictures of human beings lest it becomes the first step to idol worship. The essence of his agenda is in the motto: "Shariah ya Shahadat (Islamic laws or martyrdom)". On his FM channel, he warns parents against sending girls to school unless they observe full purdah. Barbers have been ordered not to shave beards, and shops proscribed from selling CDs and music cassettes. He recently ordered his followers not to administer polio drops to their children. Reason: the polio drop is part of an American-Zionist plot to render them sterile.