Hope In A Bamboo Basket

The disabled in rural areas are hardly a blip on our conscience. Here's an effort in that direction. 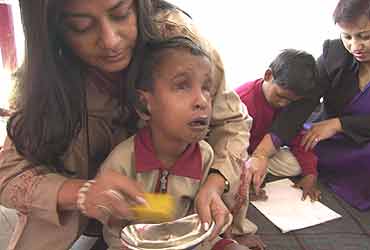 outlookindia.com
-0001-11-30T00:00:00+0553
When a careless nurse administered an antibiotic injection on 6-year-old Raju Kathar of Rewa Maheswar village, in central Assam’s Kamrup district, little did his parents realise that it would disable him. In ano-ther case, a speeding army truck knocked and injured Harisuddin Ali of Kopalkata village, 40 km from Guwahati, his parents took him from one quack to another. Soon his injured leg became gangrenous and the 7-year-old was in excruciating pain for a whole year.

Suchismita Majumdar considered the plight of such children and their parents. Being polio-afflicted herself, she knew there was something to be done. She had some experience in dealing with disability and had been certified by the Rehabilitation Council of India to work in the field. In ’97, Suchismita and two other women—Diba Nahin and Manjari Barooah launched Swabalambi, an organisation for the rehabilitation and training of children with multiple disabilities. Today it is the pioneering agency in the area of community-based rehabilitation of the disabled in rural Assam.

One of the first cases it took up was that of Raju Kathar. He was operated upon at Guwahati in August ’98. Raju is now a class vii student at a regular school and has excelled in the national and regional Abilympics. Harisuddin’s gangrene-afflicted leg was amputated and replaced with an artificial one, enabling him to also attend a regular school.

Swabalambi’s 10-member staff and four paid volunteers monitor the 44 villages in Kamrup and the West Kameng district in neighbouring Arunachal Pradesh. With active help from village elders and community leaders, children with disabilities are identified. Those requiring corrective surgeries are brought by the volunteers to Guwahati, where leading surgeons render their services for free. "We act as facilitators and help the beneficiaries by arranging their medicines and coordinating with other agencies that directly give out aids like the Jaipur foot, hearing aids, wheelchairs, tri-cycles etc," says Suchismita.

Swabalambi staff and volunteers comprising special educators, doctors, teachers and therapists have endeavoured to make the beneficiaries feel they are not the recipients of any charity but were getting help as part of their fundamental right. There is also an effort to make the diabled independent. Take the case of 21-year-old Raju Timung whose legs were paralysed. The NGO ensured that he was given a specially designed tricycle and trained in bamboo craftwork. Today Raju is a trainer himself, teaching village youth the art he has mastered. Training is also provided in jute work, block printing, weaving and machine embroidery.

Swabalambi purchases the handicrafts made by these children and sells them at exhibitions. The NGO is supported by the Union ministry of Social Justice and Empowerment. It plans to set up an integrated vocational-cum-education centre once funds are available. "We have the will and the expertise to expand our work, carry out a baseline survey to find out the number of children and others with disabilities. Maybe we can fulfil our dreams some day," says Suchismita.