Honey, I Shrunk The Gods 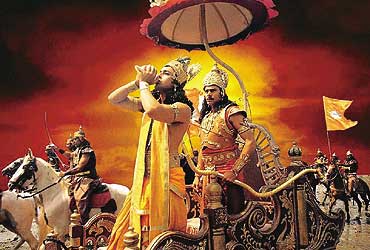 outlookindia.com
-0001-11-30T00:00:00+0553
Sanjay Khan, the badshah of kitschy small-screen historicals, has a knack of coming in from the cold, and staying in the news. After acting in and producing over 35 films, Khan turned to the small screen, survived a devastating accident and produced the modestly successful The Sword of Tipu Sultan some years ago. Of late, his spotty reputation has been mired in controversies—Khan is allegedly a Doordarshan defaulter and, three months ago, was charged with stealing power from the Karnataka Power Transmission Corporation Limited for his resort and spa near Bangalore. Now he has accused the former CEO of Numero Uno International, his television software and marketing company, of duping him of Rs 8 crore.

But you can't keep Khan down, anyway. These days, inside Vrindavan Studios in Umargaon, near Mumbai, he's working on his new mega-project and repeating history. Sorry, mythology. Long after B.R. Chopra made Mahabharat to transform many small-screen actors into gods overnight, Khan is making the same epic again. Scheduled to go on air from December 28 on Zee TV, the producers, Khan's ambitious venture involves a Rs 20 crore budget—less than what Aamir Khan spent on Lagaan, but more than Santosh Sivan's Asoka.

Gods sell well in India—remember Satram Rohraa's Jai Santoshi Ma released in 1975?—and the canny Khan has always been keenly aware of that. So these days he is also working on Maryada Purushottam Ram, a film based on Valmiki's Ramayana. Scripted by Farrukh Dhondy and T. Murari, the movie, being made at a Rs 55 crore budget, has Amitabh Bachchan playing Dasharath and Jackie Shroff essaying Ravana's role. For the lead actors, Khan is scouting for fresh faces since "they should not have an image and be believable as Ram and Lakshman."

The shooting will begin sometime next year. At present, however, Khan is busy with the serial. Sitting inside the Andheri East office of Numero Uno International, he reflects on why he is revisiting the epic: "I've always wanted to make the Mahabharata. Even when I was playing the hero in B.R. Chopra's Dhundh, I used to come up with ideas for visuals for the epic. So, when Zee approached me about six months ago, it rekindled the irresistible urge to make a serial."

But one question remained: how to remake an epic which has already been made for television once before? "The structure of the new version was a challenge," Khan admits, "so we immediately started researching. Eventually, we decided to project the subtext of the epic. Instead of simply narrating the story, we want to show the conflict within the characters, and the motives behind their actions."

Another politically correct strategem by Khan is playing up the role of women characters in the epic to woo the substantial women viewership. "The characters of individuals like Amba, Ambalika and Draupadi have made substantial contributions to the plot, and we have given them the space that is in keeping with their significance," he says. Khan claims that his version of Mahabharata is technically superior to many such contemporary serials—he's shot it on digital tapes with state-of-the-art cameras, and also claims to have employed a lot of computer-generated graphics to give it a "contemporary" feel.

Be it Tipu Sultan or The Great Maratha, Jai Hanuman or 1857: Azaadi Ki Jung, Khan's productions have been traditionally lavish. Mahabharat, he says, is no exception. Says he: "For one of the battle scenes,, I have employed 1,200 actors, 14 chariots, and as many as 500 horses." And the sets at Vrindavan Studios tell the whole story—the Hastinapur court looks as spectacular as anything ever seen on Indian television.

Along with his two dream projects, Mahabharat and Maryada Purushottam Ram, Khan's company has three new serials one the floor—Sindoori for either Sony or Zee, Maharathi Karan for DD, and Jannat for Star. "We are a flourishing company," he says, "and we are out to ensure that the viewer gets the best production values." Khan doesn't reveal how he cuts these fat telly deals in times of personal adversity and cash-strapped channels, but one thing is clear: he never looks back.

What's In A Name?