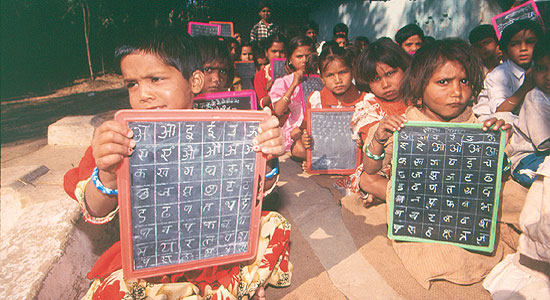 The Beautiful Tree: A Personal Journey Into How The World’s Poorest People Are Educating Themselves
By James Tooley
Penguin/Viking | 320 pages | Rs 499

When I first met James Tooley at a seminar on a cold morning in Delhi, I was drawn to him by his sincerity, his passion, and most of all by his infectious smile, which made everyone in the room smile back at him. As I watched him I thought of Tagore’s observation in the Stray Birds about how much the world loves a man when he smiles.

Tooley’s remarkable book tells of his  discovery that in the slums of India, in remote villages of China, and in Africa’s shantytowns, the world’s poorest people are creating their own schools to give their children a better future. In a journey which began in the slums of Hyderabad, Tooley finds out how committed entrepreneurs and teachers in poor communities have started private schools with very low fees (Rs 70-170 per month). These are affordable for the children of rikshawallas and daily labourers. He concludes that 65 per cent of schoolchildren in Hyderabad’s slums are in private unaided schools. In India there are thousands of such schools which are run by the poor for the poor. The education establishment, however, wants to close them down. The new Right to Education Act gives the government three years to close all ‘unrecognised schools’.

Schools by and for the poor do succeed. Unlike government schools, teachers are motivated and accountable.

Before his discovery, Tooley believed that government schools were the answer to universal education. Then he asked parents in the slums why they had removed their children from government schools with better facilities, and why they were paying their hard-earned money to send them to private schools. The answer was that government schools had failed. Teachers did not show up. When they did, they did not teach. You had to often bribe to enrol your child. This explains why over half the children in India’s cities and a quarter in its villages are in private unaided schools.

The government makes it difficult for these private schools to function. Tooley was baffled to learn how often inspectors visited them. It was not because of dedication to quality and standards, but to be ‘made happy’, as a teacher put it. Schools have to resort to bribery to keep the inspectors from closing them down. The principal effect that the Right to Education Act will have on them will be to raise the amount of bribes. This in turn will force them to raise fees. As the headmaster of one of these schools (Peace High School), a man named Wajid, tells Tooley, he became a private school educator because, “sometimes, government is the obstacle to the people”.

The secret of success of these private schools is that ‘teachers are accountable to the manager (who can fire them), and, through him or her, to the parents (who can withdraw their children)’. In a government school, on the other hand, the chain of accountability is much weaker, ‘as teachers have a permanent job with salaries and promotions unrelated to performance. This contrast is perceived with crystal clarity by the vast majority of parents.’

Tooley also quotes studies which explain their success: ‘...children in unrecognised private schools scored nearly 18 percentage points more in math than children in government schools.’ The reason: on average they had smaller class sizes, more motivated teachers, all the while spending less than public schools. When parents pay the fees that keep a school afloat, he reasons, the school becomes more accountable to them.

These schools do not get recognition because they do not meet standards—ie they do not have a playing field of a certain size and they cannot pay government salaries to teachers (which after the Sixth Pay Commission have increased substantially). If they had to pay those salaries and have those playing fields, the schools would have to quadruple their fees. Then they would no longer be schools for the poor.

Tooley’s pioneering research has turned conventional wisdom on its head with a profound message of empowering the poor. Instead of being dependent on government and foreign aid, the world’s poor are educating their children with their own rupees. Instead of trying to uproot this beautiful tree and close these schools, governments should help them to obtain some form of graded recognition so that they are not outside the law. The Beautiful Tree is required reading for anyone who cares about achieving universal education in India.