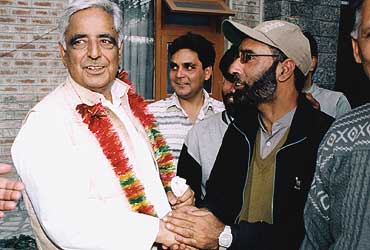 outlookindia.com
-0001-11-30T00:00:00+05:53
Serious differences have surfaced between coalition partners Congress and the People’s Democratic Party (PDP) over a solution to the Kashmir problem. CM Ghulam Nabi Azad of the Congress said recently at a public rally in Rajouri that the state had no role in resolving the issue, that its part was confined to development. He went on to say that he had given a full mandate—on behalf of the government—to New Delhi to find a solution. Azad also ruled out talks with militants and asked them to surrender before coming to the negotiating table. He even described the talks between the NDA government and the Hizbul Mujahideen as a "shameful" act.

This position is totally against the political manifesto of the PDP and its chief, Mufti Mohammed Syed, reacted sharply. The Mufti made it clear that his party believed that the state government, as also the legislature, have an important role to play in the ongoing peace process. As for New Delhi being given the mandate on behalf of the Kashmiris, the PDP chief said the question did not arise. The Mufti’s outburst comes at a time when the increasing proximity between the Congress and the main opposition, the National Conference, is causing much heartburn in the PDP In fact, it is Azad’s close advisors who have opened channels to the senior NC leadership.

Who Let The Plane Out?