Home  »  Magazine  »  National  » Rebel Hunt »  Home-Grown, Home-Slain: Why Militants In Kashmir Are Being Killed Near Their Homes

Home-Grown, Home-Slain: Why Militants In Kashmir Are Being Killed Near Their Homes

Some 50 Kashmiri militants were killed near their homes in 2017. That number is increasing. Why? 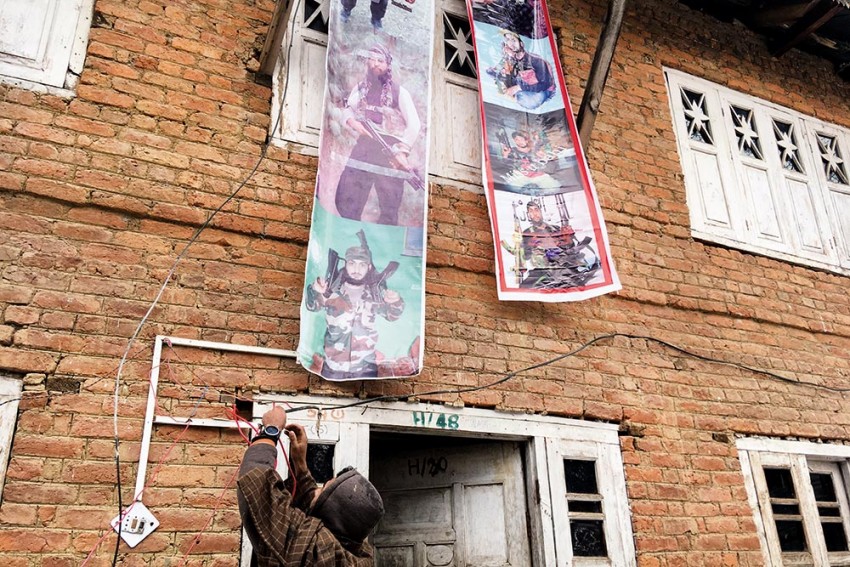 In Memoriam
Posters of Showkat Ahmad Khan outside his house, Handora
Photograph by Naseer Ganai
Naseer Ganai November 08, 2018 00:00 IST Home-Grown, Home-Slain: Why Militants In Kashmir Are Being Killed Near Their Homes 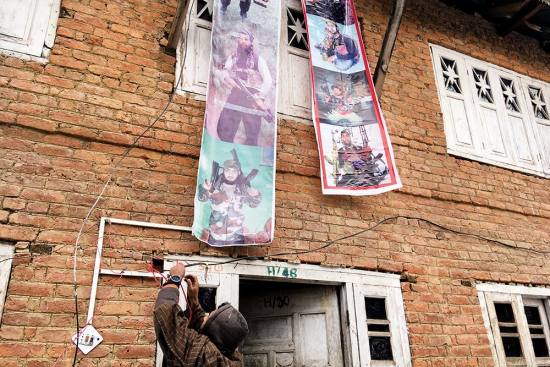 The skeleton of his burnt-down house greets the eyes of Ghulam Mohideen Dar, 41, as he sits gazing upon the remains from a distance, his three-year-old daughter on his lap. Has anything survived? Who knows. None from the family has dared to enter the charred walls, braving the police poster that has hung there—“Danger: don’t venture near the house”—since the house, in Chinktar village in the volatile Tral area of Pulwama district, was gutted in a gunfight at the end of October.

According to Mohideen, two militants, who the police later identified as Showkat Ahmad Khan, 17, and Usman Haider, nephew of Jaish-e-Mohammed (JeM) chief Moulana Masood Azhar, entered the house that day, followed by the army; a gun battle erupted within minutes. Locals say the soldiers set fire to the residence, killing the fighters inside. No protest occurred during the encounter.

Cut to Handora, a small village in the foothills of a mountain, only about seven kilometres away. There, 62-year-old Ghulam Nabi Khan, frail and grey-bearded, tells Outlook that the police had called him that evening to collect the body of his younger son, Showkat—the teenage fighter killed at Mohideen’s house. This was the second son he’d lost this year; his elder son Ishfaq, 22, was a JeM fighter who was killed along with three associates in a gunfight in the Tral region’s Laam forest this April.

Recounting his sons’ turn to militancy, Khan says that Ishfaq, who had studied until class XII, was arrested a few years ago in the Pampore area for trying to stab a policeman. “In front of me he told the judge that he hadn’t done anything. Even so, he was put in custody for about a year,” Khan recalls. And on July 25 this year, the army whisked Khan away from his house to the main road, where “they were clearing an IED.” The soldiers kept him with them throughout the day, and when he was allowed to ret­urn home in the evening, his younger son Showkat, a class XI student, was gone. “My son heard about me being called by the army, and he thought he might also be detained and face interrogation. That was the day when I saw him last,” he says, adding, “We didn’t see him again. The forces would raid our house, but all those months he was not seen anywhere.” 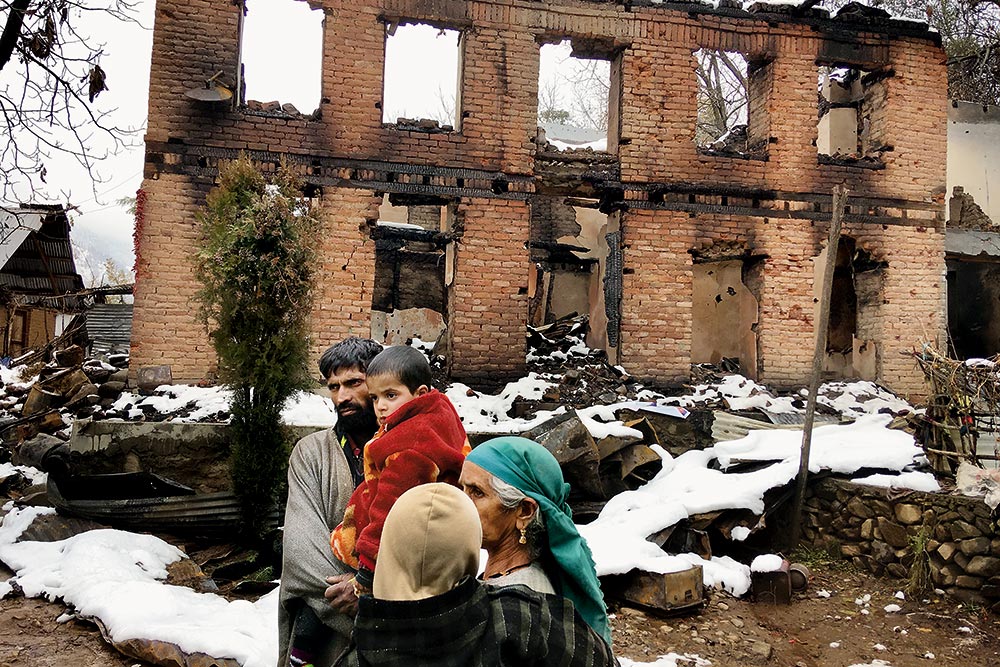 The police provide an account that seems to fill in some of the blanks: they claim that both brothers were ‘new-age’ militants who had joined out of conviction, and that Ishfaq had done so after he was released from his imprisonment after the stabbing case. And that day in July, Showkat had been the one to plant that IED on the Tral-Satura road, before absconding to join the militants’ ranks when he was asked to report at the ­station, according to the police.

In the end, the brothers were both killed not far from home—and this is part of a new trend. More and more militants are being killed in operations staged near their native villages, in a strange parallel to the cases of security personnel being killed at home or on their way home. In 2017, such operations took the lives of at least 50 militants, according to a senior police officer; this figure has alr­eady been exceeded in the first 10 months of 2018.  The tendency began to pick up about four years ago, the officer says, when people started throwing stones at the security forces while the latter were engaged in gunfights with militants.

Many militants use their home villages and the vicinity as “operational areas”, as they feel safe there and know the ­terrain and the people.

The police say there is a strong link between the area of recruitment and the number of militants actually present in that area, with most recruitment taking place within a 10-kilometre radius of encounter sites. And in south Kashmir, most militants have been killed within a two-to-five-kilometre radius of their home villages. There are tactical reasons for this: senior police officers say a sizable number of new-age militants use their native village and the vicinity as an “operational area” to move around, as they feel safe there and know the terrain and people.

Last month, 26 militants were killed in gun battles with security forces across Kashmir, with police data showing that 10 of these were killed close to their homes. Four militants—two of them ‘district commanders’—were gunned down in Srinagar alone. Among them was Mehraj-ud-Din Bangroo, one of the longest-surviving militants, who was killed with his associate Faid Mushtaq Waza. Both were Srinagar natives.

Additional Director-General of Police, security and law and order, Muneer Ahmad Khan plays all this down. He says that there were three to four instances last month when militants were killed in their areas of residence. “It can’t be generalised,” he says, adding that anti-militancy operations are based on int­e­l­ligence inputs, both technical and human. “It doesn’t matter to us where the militant is, whether closer to home or away. We go by our intelligence inputs.”

In north Kashmir’s Handwara area on October 11, scholar-turned-militant Manan Wani was killed in a gunfight in Shatgund village, a few kilometres from his home in the Lolab Valley. While his name hadn’t figured in any attack by militants, Wani remained the most discussed rebel on social media; the security establishment was worried that, more than the gun, Wani’s pen could attract more educated youth to militancy, and that he could become a role model for the Valley’s young. And indeed, since his ret­urn to his native region, north Kashmir—militancy-free for many years—has seen an uptick in educated youth leaving home to pick up the gun.

Wani, who had been working towards a Ph.D. in applied geology at Aligarh Muslim University—the first from his remote village to pursue a doctorate—had disappeared in January. But, exemplifying another new trend, he didn’t disappear from social media; in July, he wrote an article rejecting the narrative that Kashmiri youths see dignity in death when joining militant groups. Wani stated that “the militants don’t fight to die but to win, and don’t feel dignity in death but feel dignity in fighting Indian forces.” As the article was widely shared on social media, the police registered an FIR against the local news agency that first uploaded it.

Experts here argue that the present militancy in Kashmir is not about survival. Pleading anonymity, an academic says, “It is not about risk aversion. Not about long-term strategy. There is no concept of forest hideouts like in the ’90s. Militants are out in the open, without masks, on social media and at militant funerals, ready to embrace death. It is only because this militancy is about making a statement.”

By Naseer Ganai in Tral and Srinagar