India, if it looks to its past, can't but say no to the Capo's demand on troops to Iraq 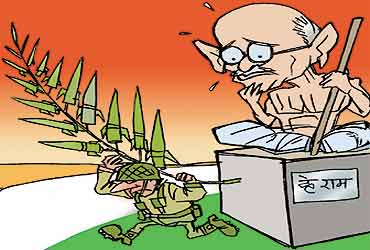 outlookindia.com
-0001-11-30T00:00:00+0553
George W. Bush's 'war-against-terror' bandwagon may seem, at first glance, a most propitious place to be for those willing and able to hitch a ride. In today's lawless world, it is tantamount to being granted a 007 license to kill. Every hooligan with a score to settle, a share of the global booty to grab and/or a victim to victimise can do so with impunity—so long, of course, as he is fully aware that licensing rights are the exclusive preserve of the Capo di tutti Capi (don of all dons) in the Oval Office.

That it is a lawless world should, I hope, have become wholly clear by now, even to the most delusional among us. Sure, in such a world as this a ride on Junior's bandwagon pays dividends (ask Sharon or Putin or Berlusconi), while to abscond is to risk punishment— "you're either with us or against us".

India is currently facing a similar dilemma, though with far more serious ramifications. The US/British occupation of Iraq is proving a quagmire. More than 70 American soldiers have been killed since Bush declared the end of hostilities in Iraq. More serious still is the fact that the attacks are helping brutalise even further the occupation soldiers, already steeped in imperial arrogance and anti-Arab racism.

The Bush administration's way out of the quagmire is not, naturally, to internationalise the problem, as the great majority of Iraqis are demanding. The rules of the game have been set in stone: there is to be only one principal thug on this, or indeed any other, block in today's global village.

The answer: bring in the Indians.

Britain and Poland are already in place, but there is little scope for them to raise their military presence in Iraq in any significant way. India is being called to fill the gap. And while little is known publicly of the exact nature of either Washington's carrot or stick vis-a-vis the Indian government, there is little doubt that the enticements are substantial as are the potential punishments.

Yet, I cannot see it. I doubt very much that a great many Indians can. Certainly, one can remind the Indian government of the many examples—not least that of Egypt—of American imperial ingratitude. One can warn of the dire effects such a step would have on Indian-Arab relations, or try to sound the alarm about a policy decision that would put Indian soldiers' lives at risk in order to protect Iraqi oil for American corporations.

Yet, all of this is so obvious it is practically self-evident. The mind balks at the fact that any of it needs to be discussed at all. The crux of the matter is that we are being called upon to imagine, let alone actually see, Indian soldiers acting as an occupation force in an Arab nation.

Much waters have flowed under a great many bridges since Jawaharlal Nehru came to Egypt in the early '50s. Yet, in Al-Ahram's archives, the photo of the young Free Officers, Nasser in their midst, sitting before the Indian national leader as students before a teacher continues to elicit pangs of recognition. A couple of years later there was Bandung: Nasser and Nehru's confident, smiling faces became the very symbols of the birth of a new, post-colonial world.

The identification goes back much further. In Al-Ahram of January 25, 1931, senior columnist Ahmed El-Sawi Mohamed celebrates Mahatma Gandhi's release from prison under the title: "The Day of Gandhi, the Day of India, the Day of Freedom." Later that year, the Mahatma, on board a ship on his way to London for negotiations with the British authorities, stops over in Port Said. It is Sunday evening, September 6, 1931. A delegation of Egyptian nationalist leaders is on hand to welcome him. Telegrams of welcome and support are dispatched from the leader of the Wafd Party, Mustafa El-Nahas and his wife.Al-Ahram's most senior journalist, Mahmoud Abul-Fath, is dispatched to Port Said to interview the leader of the Indian national movement. The next day, in Al-Ahram, Abul-Fath describes the one hour he spent with the Mahatma as the most memorable in his life, "an hour in which I sensed the true heroism of this paragon of patriotism and self-sacrifice".

Sure, much waters have passed under a great many bridges since these times. Yet, only a few months ago, young Egyptians were forwarding, via e-mail, an article written by Gandhi more than half a century ago on the Palestinian question. The memory of a time when oppressed people struggling for their freedom could look towards each other for inspiration; forge a common identity that has very little to do with their religions or ethnicity and everything to do with their humanity—this memory cannot be erased, so long as we retain our humanity and our striving for freedom.

None of this will probably appear on either side of the ledger as the Indian government tallies the profits and costs of its ultimate response to the US demand. Memory, after all, is an insubstantial thing, but it lies at the heart of our very identity. To come to Iraq as part of an imperial force of military occupation, India would be losing its very soul.

"Remember this, we may be many, they be few. They need us more than we need them. Another world is not only possible, she's on the way and, on a quiet day, if you listen very carefully you can hear her breathe." With these words Arundathi Roy concluded her speech before thousands of civil activists from around the world, who gathered at the World Social Forum in Porto Alegre last January. This coming January, they will be gathering in India for the first time. We can only hope that they will not do so in shame.

(The author is managing editor, Al-Ahram Weekly, published from Cairo)