The host nation hasn't cheered up. Their team is a bit unsure. 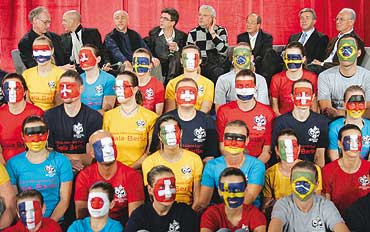 The hysteria mounts, the World Cup bristles in anticipation. But in Germany, the build-up to the World Cup has been phlegmatic. While in 2002, South Korea and Japan frothed with neophyte enthusiasm, Germany has yet to decide whether to kick up its heels and join the international conga line or to simply grin and bear the World Cup like parents at a toddler’s birthday party.

Hubert Sigl, the taxi driver who drove me from the Munich airport to my hotel in the old city centre when I visited Germany a few weeks before the start of the World Cup, thinks there’s too much money in football. A former reserve team goalkeeper for local side 1860 Munich, always in the shadow of powerful Bayern Munich (Germany’s ‘FC Hollywood’ are four-time European champions and 18-time national champions), Sigl is nostalgic for his era. "Back then (the ’60s)," he tells me, "players lived like working men. Today, players have no spirit." Sigl pulls a yellowing photo out of his glove compartment. His own haphazard goalkeeping career had taken him improbably to Liberia. The picture, its edges curled and grubby, bore the proof: a white man looking like weisswurst, Bavaria’s iconic white sausage, among his black teammates.

The romance of Sigl’s Liberian adventure is the romance of the World Cup—a startling, exhilarating collision of peoples and cultures that even the Olympics cannot hope to achieve. But in Germany you are reminded of the insular appeals of football, the distinctly local animuses and matchday traditions that give club football its flavour. Top-level German league football has remained accessible, through low ticket prices and safe standing areas, in a way the much more glamorous leagues in Italy, Spain and England have not. This has meant that even a world-famous club like Bayern finds it difficult to attract the best players in the world, or to compete with the likes of AC Milan, Juventus, Barcelona, Real Madrid, Manchester United and now Chelsea. After the World Cup, Michael Ballack, Bayern’s—and Germany’s—handsome, imposing captain and best player, will move to Chelsea, depriving the Bundesliga of one of its brightest stars. Not that the fans, who flock in record numbers to the games in stadiums spruced up for the World Cup, are complaining. The prevailing view is that German football should not be held hostage to commercial interests, to price out working-class fans, or to provide a stage for the world’s best players at the expense of young German ones.

So is it any wonder that the commercial juggernaut that is the World Cup, or its slightly ersatz, hokey ‘carnival’ atmosphere is regarded with varying degrees of suspicion and ambivalence? You can’t fault the organisers for not trying. Germany is doing its damnedest to lay out the red carpet. Hotel employees and public transport workers are learning foreign phrases. Everyone is being told to smile. The stadiums, particularly Munich’s Allianz Arena, are magnificent. Spending within Germany is expected to rise by ,5 billion during the World Cup and over a million foreigners will board flights headed in the direction of one of the 12 host cities. It is this latter statistic that is causing considerable concern.

Germany, though 7.3 million ‘foreigners’ account for nearly nine per cent of the population, is still, even in the cities, homogeneous, even provincial. There is the additional complexity of an uneasy integration with the former East Germany, far less wealthy than the plutocratic West. Already a former government spokesman has warned "a visitor of another skin colour" to avoid "small and medium-sized towns in Brandenburg.... It is possible he wouldn’t get out alive." The remarks have been widely disparaged, though the criticisms have been made to look defensive and hollow by recent attacks on immigrants and a Turkish-born politician in Berlin and the outlying suburbs of Brandenburg. There is too the related worry of hooliganism. In Berlin’s Friedrichshain, on the longest remaining stretch of the Wall, I saw scrawled the poorly-spelt legend "Pogon Szczecin holligans from Poland".

Security authorities suspect the hooligans from Poland could prove a more dangerous proposition than the known quantities from England and Holland. Notoriously, last year, hundreds of German and Polish hooligans organised an armed clash on the German-Polish border. The schedule was ironed out on the Internet. Far-right activity in Italian, German and Eastern European stadiums has markedly increased. And in Spain, monkey chants and bananas flung at black players is routine. Surreally, German neo-Nazis have adopted Iranian president Mahmoud Ahmadinejad as a sort of mascot because of his anti-Semitic rhetoric.

And then there is the ambivalence Germans feel towards their team. Few give Germany, whose World Cup record is second only to Brazil, a chance. A German writer described the country as a "soccer superpower with an inferiority complex". To the outsider, it seems ridiculous that most Germans believe England, a middling soccer power with a superiority complex, have a much better shot at winning the World Cup than Germany. That is, until you see Germany play. When West Germany hosted the 1974 World Cup, the team (captained by Franz Beckenbauer, who coached Germany to their third World Cup win in 1990 and organised this one) was reigning European champions and the best German team ever. The hope for the current team is simply to avoid embarrassment.

But it is as easy to imagine all that could go wrong, as it is to buy into the Nike Joga Bonito vision of a World Cup dominated by incandescent individuals performing superhuman feats (yes, Brazil we mean you). As I sped towards Munich’s airport to catch my flight to Berlin, I saw the enormous radial that is the Allianz Arena glowing carbuncular in the pre-dawn dark. I imagined it filled to capacity—70,000 people desperately clinging to the same hope, not for the partisan pleasures of victory but for the singular beauty and drama of the game.

Germany is bogged down by its history, by the shameful 1936 Berlin Olympics, by the murder of Israeli athletes at the 1972 Munich Olympics, careworn with anxiety about the World Cup it is about to host, but in the spectacle of the Allianz Arena you see the gleaming possibilities. Let the games begin.

Shougat Dasgupta in Munich and Berlin