Hole In The Roof

Tibetans in India see hopes dip, are shocked at Vajpayee's 'sellout' to the Chinese 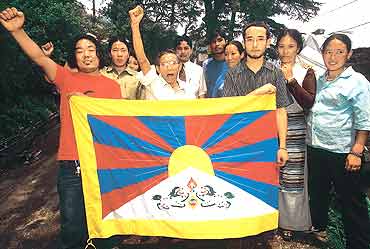 outlookindia.com
-0001-11-30T00:00:00+0553
Last Monday night the monks at Namgyal monastery broke one of their cardinal rules: no TV except on Sunday nights. For weeks, the monks like the rest of the 100,000 Tibetan exiles in India, had been looking forward to this day when Prime Minister A.B. Vajpayee—regarded by the Tibetan community as a staunch supporter of their cause—was scheduled to sign a joint declaration with China.

Two minutes into the TV news, they paid the price for the violation of rules—and high expectations. "I felt very sad," says Lobsang Dhakpa, a former political prisoner from Lhasa. "We expected too much from Vajpayee's visit but it turned out differently." Being a Buddhist monk, Dhakpa " is drowning his disappointment in prayers", but most of the Tibetan exiles here are yet to recover from the shock, rage, despair and, above all, deep sense of betrayal they felt as Vajpayee signed his name to a statement declaring "the Indian side recognises that the Tibetan Autonomous Region is part of the territory of the People's Republic of China and reiterates that it does not allow Tibetans to engage in anti-China political activities in India".

When the news reached Tsering Lhama, a nurse in the Tibetan Delek hospital, she burst into tears. "After all," her husband consoled her, "it's nothing new. We were too naive to expect anything different."

The Indian government—and its diplomatic bosses—have been claiming that last week's declaration is not substantially different from those in the past signed between the two countries. For instance, the 1991 India-China Joint Communique too declared that "Tibet is an autonomous region of China"; ditto the 1988 statement.

Political activists here, however, feel otherwise. "Unlike the earlier statements which never clearly defined Tibet's territory and population (leaving it open-ended with ample scope for interpretation), this one refers for the first time to the Tibet Autonomous Region (TAR) as defined by China, including less than half of Tibet's territory and only one-third of its population," points out Lhasang Tsering, a Tibetan dissident leader who now runs a bookshop.

Obviously, for the community living in exile there's a huge difference between referring to Tibet as an autonomous region of China and invoking the Chinese nomenclature of TAR, moth-eaten and all. This isn't only about the subtle undermining of the conception of Tibet; it's also about slicing dreams and imaginations from the homeland—and consenting to what the Chinese have done. "It leaves no room for doubt or an alternative interpretation," says Tsering.

But those in the exiled government insist "nothing has changed". Says the head of the government in exile, Prof Samdhong Rinpoche, "The statement is in consistence with old policy, it hasn't changed anything. It was only the misinformation spread by the Chinese news agency Xinhua that caused some confusion. Yashwant Sinha made it quite clear the next day that India's relationship with the Dalai Lama is very good." Prof Rinpoche insists that the present declaration is as open-ended as earlier Indian statements, if one lays stress on the words "the People's Republic of China". This is a nationhood, according to him, that was invented only in 1949 and "may disintegrate anytime".

Few share Rinpoche's optimism. All Tibetans, according to Dolma Schoephel, joint secretary of the Tibetan Youth Congress (tyc), "whether they were listening to the radio or watching TV, went into depression with the joint statement. We never expected Vajpayee, of all people, to sell out to the Chinese like this". Another tyc member, 62-year-old lawyer Pasang Tsewang agrees, "My heart broke when I heard the news. So far it was only talk but Vajpayee put it down in writing. He put Tibet on a plate and fed it to China."

The anger of the tyc members is hardly remarkable, considering the organisation's dissident tradition. Their government's undue optimism is also putting off the overwhelming majority of Tibetans who have never dared to question their government's strategy so far. Take Tsering Yeshi, for instance, a former teacher and mother of two who now heads the Central Tibetan Women's Association. She dubs Rinpoche's reading of the declaration as "too nai#ve and optimistic". "We had hoped Vajpayee would act as an honest mediator between Tibet and China. Instead he has strengthened China's hand by implicitly acknowledging that the areas carved out of Tibet are part of China," she says.

Similarly, Jamphel Tsetan of Guchusum, an organisation run by former political prisoners is equally unwilling to buy his government's line. "It's a sellout, but then most people do things for their own country." The Chinese, according to Tsetan, "are only buying time. There will be a time when the Dalai Lama is not there, what happens then?"

It's a question the Tibetans, who have woken up every morning for the last 43 years with a prayer for the Dalai Lama's long life on their lips, are beginning to ask themselves. Having pinned all their hopes on the renewed contact between their leader and China, most Tibetans believed like Rinpoche that a breakthrough was round the corner. "Just a matter of 3-5 years," as Rinpoche points out. Explaining why Vajpayee's statement came as a bolt from the blue, Tsering Yeshi says: "One reason why we were so looking forward to Vajpayee's trip was because we believed he'd persuade the Chinese to meet His Holiness personally."

Rinpoche still maintains that "a statement here and there does not represent what India is doing for Tibet and Tibetans" but the overwhelming majority of the exiled community have their doubts. As the head of the women's association, Tsering, toeing the government line till now, points out: "Tibetans have so far felt nothing but gratitude to the Indian government for what it has done for the exiles. We did not expect India to forsake its own political interests but Vajpayee went one step further than necessary. It was an outright sellout to the Chinese."

"India has been good to us," agrees lawyer Tsewang, who is as bitterly disappointed by Vajpayee's "betrayal" as most of the older generation. "I would not feel so bad if India got something for sacrificing us. But what did they get? Take it from me, China will betray India again as it did in 1962. They won't keep their word."

Bookshop owner Tsering is far less emotional about India's inexplicable turnaround. "For me, Vajpayee's statement was the last nail in the coffin. I have no doubt that Tibet will become a separate country some day but it won't be a Tibet for Tibetans (Beijing has been settling Chinese there). It's a death, and after death there is no pain." But he feels India got nothing out of its new deal with China. Pointing out that India has just gifted away to China its best buffer on its northern border, he says: "India has more at stake in Tibet's future than Tibetans themselves."

"It's not just about Tibet," says the disillusioned exile who was just 10 years old when he fled Tibet, "it's about the roof of the world. And China has just blown a hole in the roof." Obviously, with a little help from Vajpayee.