Holding On To His Chances

The Najafgarh boy just wants to get on with his game. 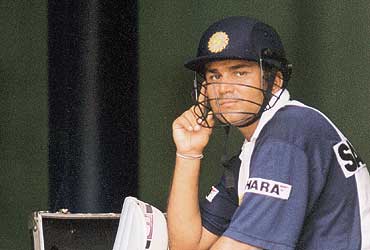 outlookindia.com
-0001-11-30T00:00:00+0553
It was a cloudy morning in Johannesburg last Wednesday, the day before the Indian cricket team was to leave for home. Virender Sehwag was in Mkrow, a one-stop shopping mall at Woodmead, a Johannesburg suburb, with two friends, looking for a watch which fitted his wrist, budget and taste. The 23-year-old hard-hitting batsman from Najafgarh, an industrial town just outside of Delhi, had already become a pawn in one of cricket’s nastiest civil wars. But he was trying hard to keep his mind off the snowballing confrontation between the ICC and BCCI—and the fact that he had become the ‘core issue’. "It’s been an impossible week," said a rather sheepish-looking Sehwag midway through a shopping binge. "Everytime you open a newspaper or log on to the Internet, you unfailingly see your name."

Early November, Sehwag had been on cloud nine, having scored a century on his Test debut against South Africa at Bloemfontein. He had been feted at home and abroad by fellow cricketers and the media. Now, caught albeit inadvertently in the middle of a row between egotistic administrators which was threatening to get out of hand, Sehwag was desperately trying to shun the limelight. Earlier, he had been in tears—as a team member confided—when he was prevented from turning out during the third "unofficial Test" between South Africa and India. He had even turned out for practice on the eve of the Test at Centurion, walking briskly up to the middle, lifting the covers and taking a look at the wicket. He had prayed that some last-minute compromise would be worked out between the warring camps. But when he realised he would be serving the ban, Sehwag glumly sat out the match in his hotel room. He also called up home twice and spoke to his mother and brother. "He sounded disappointed. He didn’t sound nervous, though. When he called up the second time just before the third Test, my mother spoke to him at length. After that he seemed quite cheerful. He told me that the atmosphere in the dressing room was quite friendly," says brother Vinod Sehwag.

In the week that shook Sehwag’s life, the 55-kg, 5’8" cricketer walked around in a confused daze. "But what have I done?" he kept asking. "I had only appealed and nobody saw anything wrong in it." Sure, he wasn’t to be blamed on that windy afternoon at Port Elizabeth when Harbhajan Singh had bowled to Shaun Pollock and Sehwag had picked up the chance at silly point off the batsman’s boot. He was wearing dark glasses and that alone might have prejudiced match referee Mike Denness—though Ian Howell closer to the action found nothing wrong with it.

Sehwag’s simplicity has also made him the favourite of captain Saurav Ganguly. The captain takes time out specially for Sehwag, as he does for other North boys like Ashish Nehra and Harbhajan Singh. It is an interesting case study to see the captain in the company of juniors from the North, the popular perception being it’s because they don’t form "camps". Sehwag knows he has the confidence of his captain but he chooses not to be conscious about it, looking languid, even careless off the field as he sometimes appears on it.

For a man who looks this laid-back though, Sehwag has shown fierce competitiveness on the South Africa tour. When he walked on to the field in the first Test at Bloemfontein, it was a nightmare scenario for a debutant batsman. India were 68 for four in 70 minutes of batting before Sehwag, in the company of childhood hero Sachin Tendulkar, tore the home attack to shreds and carved a personal piece of glory for himself.

The orthodox right-handed batsman, clearly, has come a long way from the time when he was chosen for the Indian team that contested the Under-19 World Cup in South Africa in 1998. The next year, Sehwag bulldozed into the Delhi senior team, totting up 745 runs at an average of 62.08. And when the national selectors gave him a chance to prove himself, he cracked a scorching 69-ball century, studded with seven consecutive boundaries, against New Zealand in Sri Lanka. The media went into raptures.

Today, Sehwag says that his omission in the series against Sri Lanka in August made him doubly determined to prove his worth in the Test arena. "I really wanted to do well in Tests and prove that it is not in one-dayers alone that I have a place in the team," he says. His wish would have remained nothing but that had Ganguly not backed the youngster—some commentators now call him the Butcher from Delhi—and made it possible for him to stay back for the Test series in South Africa.

Even accounting for Ganguly’s support, nobody had foreseen Sehwag occupying a spot in the eleven for the first Test and the hand of fate played a large role for this to happen. The three-day game at Chatsworth, Durban was washed out due to the organisers’ carelessness, sweeping Baroda opener Connor Williams’ chances along with it and opening the door for Sehwag.

Times have changed since then. So it was, on one evening during the unofficial match at Centurion Park, when Ganguly along with Sehwag and Ashish Nehra, went for dinner to a friend’s place in Johannesburg. After a while, Sehwag began channel surfing and paused to watch a Hindi film number—the cricketer is an ardent Shilpa Shetty fan. But it was not easy keeping his mind off the storm blowing around him. "I know none of these things will affect Virender. He’s a good player, and there’s no way such controversies could affect him in the long run," says brother Vinod.

Virender just wants to get on with the game. "I wish I was allowed to play some cricket," he says. And adds, with a hint of desperation: "If I am not going to be picked for Mohali, at least I could then be released to play a Ranji Trophy game for Delhi." Enough is enough. The fall guy of Indian cricket just wants to go out and play his game. And that’s not asking for too much, is it?

Ashish Shukla in Johannesburg With Bobby John Varkey in Delhi