A fresh hope for asthma patients, but doctors are cautious 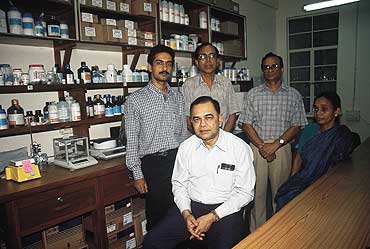 outlookindia.com
-0001-11-30T00:00:00+0553
Doctors say there are around five million asthma patients in India. Others, including ngos working in the health sector, reckon that this number could be eight times higher. Whatever it is, asthma is one of the single biggest threats to children and adults alike in our pollution-choked cities and towns. For long, doctors have prescribed the usual regimen of bronchodilators, steroids and cromolyn inhalers to prevent and contain severe attacks.

Now there's fresh hope for the patients—a greener and safer drug which claims to bring relief from this debilitating respiratory disease. Developed by five scientists from the Calcutta-based Indian Institute of Chemical Biology, a Council of Scientific and Industrial Research (csir) institution, this cheap and seemingly effective ayurvedic formulation, christened Asmon, is recommended for treatment of bronchial asthma, including acute attacks. Available in both pills and syrup forms, it's derived from seven herbs available abundantly in the country.

During an asthma attack, the muscles around the airways tighten and the lining inside the airways swell or thicken and get clogged with thick mucous. (The airways become skinnier than usual, making it harder to move air in and out of the air sacs.) What causes this process is a biologically active compound called leukotriene which, in turn, is formed because of the oxidation of Arachidonic Acids (AA), an essential, unsaturated fatty acid. An effective asthma drug, therefore, should thwart the fatty acid oxidation. Asmon, claim its inventors, does this 'block job' quite effectively. The present regimen of synthetic drugs which also work in containing asthma come with toxic side effects—pills lead to palpitations, high BP and mood swings, while steroid inhalers cause yeast infections in the mouth and hoarseness of voice. Asmon claims to set you free from such effects.

Developing the drug wasn't a cakewalk for the five-member team of scientists headed by Samir Bhattacharya. The herbal formulations underwent stringent contemporary clinical trials. Says Bikash Paul, one of the scientists in the team: "Although the herbs are very common in India, it took us some time to figure out the exact proportion in which each is to be used."

Clinical trials of the drug showed impressive results: it was administered to over 200 patients and most of them reported improvements in varying degrees. "Those who suffered bouts of bronchial asthma also felt longer healthy spells, not to mention the reduction in frequency and duration. A few even reported complete cure," claim the scientists.

Even the market seems to have reacted favourably to the drug. "It's a complete sellout. We are producing 5,000 phials daily now. Even if we produce 50,000, it won't be enough," claims Bhaskar Ghosh, director, Herbochem Remedies, which manufactures and markets the drug. Ghosh says the drug will hit the Delhi market by June-end and by the end of this year it will be a "national if not international brand name."

But that could be far fetched. Even the most effective asthma drugs in the world have come under a cloud in recent times. Last week, two new studies in the US found that using a long-acting, airway-dilating drug called salmeterol xinafoate—administered to half of India's asthma patients, according to a Delhi-based doctor—could actually worsen the condition. csir director general R.A. Mashelkar does a reality check: "Asmon is not magic. It will give relief and decrease the dependency on allopathy. But it won't be correct to claim complete cure." Even the doctors would prefer to wait and watch. Says S.K. Chhabra of the Delhi-based Vallabhbhai Patel Chest Institute: "A randomised placebo-controlled trial is still to be carried out to document Asmon's efficacy. Moreover, it has to be compared with the inhaled steroids. The drug has a long way to go." But for the suffering patients, the herbal drug does come as a glimmer of fresh hope.