Hold Back The Waves

Across the nation, her abdication has even cynics rooting for Soni 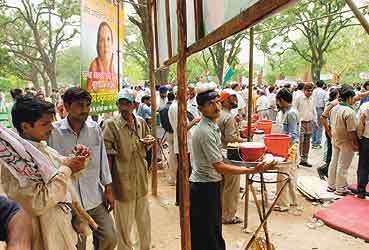 So what if Sonia Gandhi's detractors—sadhvis and swadeshi bahus alike—are claiming the credit for her decision not to be the next PM? And so what if her worst critics are maliciously calling her decision a clever manipulative trick, a political masterstroke no one expected? The Opposition has five years to dwell on it.

Meanwhile, the people of India seem to have melted. Those who misjudged Sonia as a woman lusting after political power are suddenly contrite. Many of the people Outlook spoke to suddenly see her in a different light. "Sonia's proved to be above everyone else. After her sacrifice, it will be difficult for the BJP to come back to power for the next 10 years," says Sailesh Gupta, a grocery store owner in south Delhi. Incidentally, he had voted BJP.

So the foreign origin vitriol appears to have rebounded. "It's a supreme sacrifice," says Malayalam poet Sugatha Kumari. "She's earned our respect as one of the great scions of the Nehru-Gandhi dynasty."

Platitudes are pouring in from all corners. "Her stature has gone up and she has silenced her critics. She has emerged as a real patriot," says Mohan Lal Jain, ex-advocate general of Haryana. "Sonia's decision is visionary. Today, she is a godmother for the nation," insists Shiela Didi, a Chandigarh-based social activist.

Renunciation always grabs the popular imagination. For all the thousands of kilometres Sonia travelled, for all the roadshows she held, in the end it was a single act of self-sacrifice that helped her transcend the last mile. "Only a person of integrity and with good intentions could have abdicated a powerful post like the PM of India," extols Dr Rajiv Harshe in Ahmedabad.

Finally, it seems, Sonia has been accepted as a true Indian. "She displayed political sagacity, upheld the highest traditions of Indian culture," says Dr. C.R. Soman, who runs a health NGO in Thiruvananthapuram. Echoing his views, ex-Naxalite leader Ajitha said in Kozhikode, "Sonia's proved to be more Indian than many who wear their patriotism on their sleeves. I salute her."

Even those who believe Sonia's decision was no response to any "inner voice" admit to a reluctant admiration. "Her decision is no sacrifice but a politically correct move that will help the Congress in the long run," feels Sandeep Rao, a Bangalore-based software professional.

There's also a sense that the BJP's hubris has been doubly deflated. "By opting out, Sonia has pulled the carpet from under the BJP. It was a masterstroke," says Fakhruddin Mohammed, secretary of the Hyderabad-based Muslim Educational Social and Cultural Organisation. Sanjeev Pachauri, a Mumbai-based banker, adds that "Sonia has dwarfed the BJP's stature with her decision. If there are elections now, the Congress might even sweep the polls."

Many Jackals On the Prowl