The seventh and final volume of the Harry Potter series is a pleasure to read. It plunges immediately into the story and is crisply narrated. 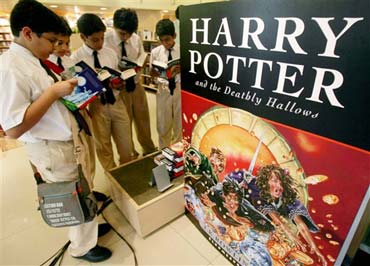 Harry Potter And The Deathly Hallows
By J.K. Rowling
Bloomsbury Pages: 608; Rs: 975
The seventh and final volume of the Harry Potter series is a pleasure to read. It plunges immediately into the story and is crisply narrated. It’s the first Potter book that has an epigraph (actually two!) that prepare one for the death and destruction that is in the novel. Yet, the dexterity and the maturity with which these incidents are handled are admirable. This is the first volume after many years where it seems that the book has finally returned to the fine art of story-telling that was evident in the first volume. It’s focused and does not meander too much.

It’s impossible and actually futile to give a snapshot of the novel. But it is a novel that marks the "adult" phase of Harry Potter. He has to leave the Dursley’s as his protection expires when he turns 17. The grand finale is the Battle of Hogwarts which is beautifully choreographed and has a satisfactory conclusion. Deathly Hallows is an excellent example of a bildungsroman. Harry Potter, Hermione and Ron are no longer the little kids or the gangly teenagers of the previous six volumes. Their personalities have developed and they have a gravitas now. This is exhibited in the manner in which they handle their quests.

The Harry Potter series has been a goldmine for Bloomsbury. Last year, when Liz Calder, publishing director, Bloomsbury, was in New Delhi, she recalled how the children’s editorial department responded to this unsolicited manuscript. They were a small publishing company which gave personalised attention to every manuscript and enquiry that came their way. When Harry Potter and the Philosopher’s Stone was submitted to them, it had already been rejected umpteen times by many other publishers. But when the editor at Bloomsbury began to read the manuscript, she was so fascinated by it that she also invited her marketing colleague and editorial assistant to read the book. Since it had been submitted as loose sheets, the three Bloomsbury colleagues sat around the table passing sheets of the manuscript to each other to read. They had to read it simultaneously! Of course, it was a foregone conclusion then that this book was being published by Bloomsbury.

Everyone comments on the marketing blitzkrieg that accompanies the launch of every Harry Potter volume. Also, the millions that it has generated for its author through the sale of royalties and, of course, made Bloomsbury a world-renowned name in publishing. But Calder also credited the excitement and the buzz around the book having been created by the sheer enthusiasm and passion for the story by the marketing and editorial team at Bloomsbury.

The latest volume of Harry Potter has already sold 11 million copies worldwide. The book is also available at a supermarket chain where only vegetables and fruits are sold. It has made its presence felt across languages, regions and classes. An illiterate maid who works for an aunt of mine in Calcutta spotted the Potter books while dusting the shelves. She was fascinated by them as she recognised the images and was able to discuss the exploits of the memorable trio of Harry, Ron and Hermione with my aunt. This is a wonderful finale to the Harry Potter series!