Held to a huge ransom by the Taliban, NWFP's Sikhs have nowhere to go 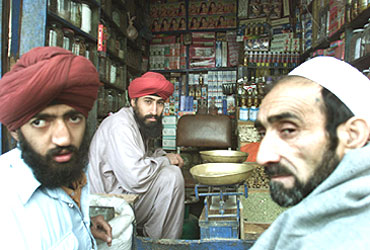 Decades before the cartographer sliced the subcontinent into Pakistan and India, ancestors of Kalyan Singh demonstrated the wanderlust typical of the Sikh community. They settled down in the green, picturesque Ferozkhel valley of Orakzai, one of the seven autonomous agencies which together comprise what is now called the Federally Administered Tribal Area (FATA). In his own 45 years of life, Kalyan had never experienced religious discrimination. He ran his business, lived a contented life with his family. And, despite the intolerance now sweeping across a swathe of FATA, Kalyan Singh would have told you, had you ever asked him, that the sturdy Pashtuns are hospitable, caring and kind-hearted.

Kalyan Singh refused to shift out from what he saw as his ancestral home, believing he was safe living among the Orakzai tribals. But then, a fortnight ago, Hakimullah descended on the Ferozkhel valley and ordered members of the Sikh community, including women, to gather in an open area. They were told they were now in the custody of Taliban, and that they must pay jazia (a religious tax imposed on non-Muslims living under Islamic rule in the medieval times) or convert to Islam.

The soldiers of the Islamic emirate then picked up Kalyan Singh, tortured him in custody for 10 long days even as negotiations for the amount to be paid as jazia kept apace. Herjeet Singh, a local Sikh, quotes an eyewitness to say, "The militants convened a shura of their own and passed the verdict that Sikhs should pay Rs 100 million as jazia. Our elders pleaded that poor members of the community have no means to raise such a huge amount." Herjeet is among those who sneaked out of Orakzai before jazia was imposed.

The Sikh community’s plea prompted further talks, with the Taliban scaling down their initial demand to Rs 40 million, ultimately agreeing to Rs 12 million as the jazia, a source told Outlook. Kalyan Singh was then set free and asked to raise the demanded amount. His and 50 other families were held hostage. They were warned that any attempts to escape would lead to the slaying of men and conversion of children and womenfolk to Islam. "This is unheard of. Our forefathers lived among the Pashtuns for centuries and were never subjected to such humiliation and barbarism," laments Herjeet Singh.

Kalyan, these days, is in Peshawar, persuading the Sikh community here to somehow raise the whopping amount. Sources say he has managed to collect Rs 3.5 million. Only when Rs 12 million is paid fully will the Sikhs in Ferozkhel be set free, provided protection and allowed to practise their religion.

It’s an onerous task for the Sikhs to raise the ransom, more so because the Sikhs constitute a minuscule percentage of NWFP, approximating just 10,000. Mainly concentrated in Peshawar, some of them migrated from Afghanistan during the reign of mujahideen and Taliban. They are mostly cloth merchants, or trade in cosmetics; a few are medical professionals. The Sikhs of the Tirah Valley in Khyber agency and parts of Orakzai are also engaged, as are local Afridi and Orakzai tribesmen, in the sale and purchase of hashish, a tribal custom many centuries old. Those living in FATA are as tribal as Pashtuns are, speaking the language with the same thick accent and eagerly participating in communal ceremonies such as marriages and funerals. 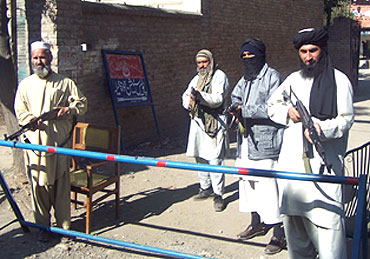 The imposition of jazia marks a disruption of this tradition of harmony. The Orakzai tribals have, understandably, remained silent, fearing reprisal from the Pakistan Taliban, who are drawn mainly from the Mehsud tribe. An Orakzai jirga, for instance, was bombed by Mehsud’s men last year, killing 160 elders and injuring another 200. The jirga had been summoned to raise a tribal armed force to evict the militants. The attack demoralised them, enabling Mehsud’s men to establish their sway. Those who oppose the Taliban version of Islam are labelled as infidels and killed in cold blood. "We are told our prayers will not be answered because Allah will not entertain non-believers," said Soranjeet Singh, who recalled the conversation he had with a militant in Orakzai a few weeks ago. "We have not seen such people. They are neither Muslim nor Pashtun."

However, religious scholars and tribal elders in other areas have condemned the imposition of jazia. "No one has the right to create a state within the state and collect ransom in the guise of religion. Jazia can only be collected when there is a proper Islamic welfare state based on solid foundations," remarks Abdul Latif Afridi, a tribal elder from Khyber agency and president of the Peshawar High Court Bar. He says the jazia incident will not only give a bad name to the Pashtuns, but provoke a worldwide reaction. "Pakistan is already in the midst of so many troubles because of terrorism; the discrimination against the minorities will prove fatal," he said.

Sources also revealed that some Sikh families living in Ferozkhel have shifted to the Shia neighbourhood of Kalaya in Orakzai. The Shias are opposed to the Taliban, and at least in Kurram agency the two have been engaged in a protracted conflict for years now. But the option of shifting to Kurram, once jazia is paid, is unlikely to be exercised because all roads leading to the agency headquarters, Parachinar, have remained closed for the past two years, cutting off the Shias from the rest of the country.

Ultimately, the drama unfolding in Orakzai isn’t just about the Sikhs. It’s also about tribal customs. As Afridi says, "Our elders gave protection to all minorities who were counted among the recognised clans of our tribes, but it’s such a pity that we can now neither protect nor rescue the Sikhs." His lament doesn’t seem adequate to goad Islamabad into action.