History Vs The Future

In the new compulsion to align with the US in the war against terror, old friends are given short shrift 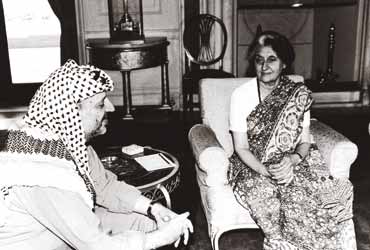 outlookindia.com
-0001-11-30T00:00:00+0553
The growing proximity between India and Israel since 1991, the year in which the two countries established diplomatic relations, elicits a tearful response from Palestinians. It ranges from optimism, expressed to a sad shaking of heads, that their friendship with India will always remain. From the Palestinian Authority comes a more diplomatic response. Says PA spokesman Saeb Erekat: "As far as its foreign relations are concerned, India has to decide for itself its interests, but as for our conflict with Israel, India has always supported us and our position for independence and we will always appreciate this."

Other Palestinians officials are not so forgiving, nor as diplomatic. Says Samir Numed, spokesperson for Marwan Barghouti, the imprisoned Palestinian leader, "We feel very bad about this. We thought India was a friend of the Arabs and Palestinians. It was once the leader of the Non-Aligned Movement, now they care more about the United States and Israel."

Some Palestinians feel Israel has successfully managed to manipulate the anti-Muslim agenda of the bjp-led government to create the feeling of a common enemy. And they are quite puzzled by it. As a teacher in Ramallah, Majid Iqbal, explains, "We are in a fight against the illegal Israeli occupation of our lands and for our own independent state. This has nothing to do with Islam. Many Palestinians, especially in our leadership, are Christian, and the plo has always been a secular organisation."

Throughout the '30s and '40s, India and Palestine were locked in simultaneous struggles to save the integrity of their lands. In both countries, vocal minorities (the Muslim League and Jewish Zionists), with the tacit approval of the then-ruling British, were clamouring for their own separately-carved niche. Although India and Palestine were unable to prevent their eventual partition, their shared fate led to the formation of a special friendship.

When I spent the summer of 1998 teaching English to 14-year-olds in a refugee camp just outside Gaza City, my colleagues often spoke of the time when they were children and a contingent of Indian UN Peacekeepers were stationed in the Gaza Strip. They told me about how thrilled they were when the Hindu guards celebrating Holi would smear them with coloured powder. When I visited families of my students, their parents would speak reverentially of Nehru and Indira Gandhi. "Nehru was a good friend of (Colonel Gemal Abdel) Nasser," they would tell me, Nasser being the great pan-Arab hero who successfully stood up to the British in Suez, 1956. There was also the love of Hindi films.

Much of this has changed now. One student, Zaher Haddad, wished India would again challenge American supremacy as it did under Nehru. "India should try and make a union with Russia and China to stand up against America. Instead, both Israel and India want to get benefits from America's war against terrorism." One doctor, Mustafa Al Jihad, who studied in Mumbai, was more philosophical. "Because of her problems with Kashmir and Pakistan, India makes a union with Israel for help in weapons. So I hope the Kashmir problem is resolved some way and India will again remember us and our history." But such hope barely conceals their disappointment at India's recent conduct of its foreign policy.