A screen makeover interrupted...he is, after all, a man with a past 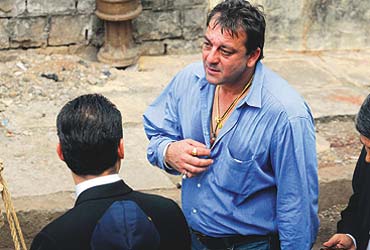 outlookindia.com
-0001-11-30T00:00:00+0553
In Sanjay Dutt's tumultuous life there's been one perpetual presence: Trouble, with a big T. Drugs, alcohol, the death of loved ones, unstable relationships, those infamous telephone conversations with don Chhota Shakeel, charges of dubious linkages with the underworld and the prolonged Bombay bomb blasts case—he has been through it all. The past decade, however, has been largely peaceful, save for the failed marriage with Rhea Pillai and the long-distance relationship with daughter Trishala. It has also been his most consistently successful phase, with Dus, Parineeta and Lage Raho Munnabhai raking in big money. But even as he basks in the success of Munnabhai, his past has come back to haunt him, as he awaits the verdict on the Bombay blasts case where he has been charged with possession and destruction of illegal arms.

The first scandal that surrounded Sanjay was drug abuse. Back in the '80s he was known to be perpetually high on cocaine and heroin, and looked and behaved like it to boot. He was in a relationship with Tina Munim, gave inconsistent performances in inconsequential films and was woefully indisciplined at work. That was the time when Subhash Ghai, after having cast him in Vidhaata, decided not to repeat him in Hero and chose to introduce newcomer Jackie Shroff instead. It was a major blow to Sanjay's fledgling career.

What pushed him into drugs? Was it to do with being the child of celebrity parents? Was he unable to cope with the high expectations? Did his mother spoil him rotten? Was he unable to come to terms with her death from cancer? Filmmaker Mahesh Bhatt says Sanjay was an addictive personality, biologically predisposed to substance abuse, a troubled teenager who constantly picked fights. "He had glazed eyes, would not communicate at all," remembers Bhatt. Journalist Rauf

Ahmad remembers how his father, Sunil Dutt, helped him through it, sending him for rehabilitation to America. "He responded to his father who never gave up on him," says Ahmad.

After de-addiction, it was Bhatt's Naam that brought Sanjay back into the limelight. "There was a tremendous thirst to become someone, a single-minded determination to make his parents proud," Bhatt recollects. Hits like Saajan and Sadak followed. In between, there were other tragedies—a lung infection, the death of his wife Richa of a brain tumour, and a custody battle for his daughter Trishala. It was Khalnayak that turned him into a mega-star, even as the illegal AK-56 episode made him a real-life villain in the eyes of many people. The one-and-a-half-year prison term he served put a serious brake on his career.

Since then Sanjay has been fitting in films in between court appearances. There have been other stories—of alcohol abuse, of working in films funded with underworld money (like the superhit Vaastav). However, the alleged procurement of illegal arms has been the biggest albatross round his neck. Why did he go for them? For a guy who loves fast cars and Harley Davidsons, the weapons could have been another macho toy to flaunt. Another theory is that he could have been victimised for his father's political rivalry with Sharad Pawar. Sanjay is known to be extremely close to his mother's side of the family, who are Muslim, and as Bhatt surmises, "After the Bombay riots, the gun may have been purchased to deal with a possible attack on the family, not as part of the dastardly attack on the city."

Journalist S. Hussain Zaidi, who wrote Black Friday, The True Story of the Bombay Bomb Blasts, recollects how Sanjay would talk to him about the innocent Muslims framed by the police and the tortures heaped on them to extract false confessions. Whatever the reasons, the fact is that evidence is stacked up heavily against Sanjay. What makes the man so trouble-prone? Like the heroes from Greek tragedy, people see him as essentially a nice guy with a flaw. "Most people in Bollywood have a facade in front and are calculating computers behind. He is unlike them," says filmmaker Mani Shankar who directed him in Rudraksh. He is known to be immensely gullible, easily trusting people. "He is not scheming or manipulative. He gets into controversies unknowingly," says Milap Zaveri who wrote Kaante, Plan, Musafir and Shaadi No. 1 for Sanjay. Or as someone put it more bluntly: "Like in his body, he has muscles in the head too—he needs to get some grey cells." At 47, the 6 ft 1" brawny hunk just refuses to grow up.

After all these years in Bollywood, "Sanju baba" remains something of an enigma. He is a man's man who moves around with friends who call each other brother. Among his close buddies are filmmakers Sanjay Gupta, Mahesh Manjrekar, David Dhawan, producers Nitin Manmohan and Dharam Oberoi. "He is the Big Brother for a lot of young stars like Zayed, Fardeen and Riteish Deshmukh. He takes them under his wing," says Zaveri. He has wielded women like mere arm candy yet they sigh for him. And, in contrast to the other bad boy of the industry, Salman Khan, Sanju always arouses public sympathy. It could be owing to people's respect for his parents. It could be the term in prison, the punishment that redeemed him in the eyes of the masses. It's also to do with his persona. "There's a vulnerability lurking beneath the myth of the macho man, which makes him endearing," says Ahmad.

He also seems to have an innate ability to fight his way back to the top, which gets him much admiration. "The jail term could have crushed anyone mentally, the solitary confinement could have destroyed him. But he bounced back, which shows enormous strength of character," says Shankar.

Some have called him "anti-national" for fraternising with the likes of Shakeel, Abu Salem and co. But he is more often described as "emotional", "large-hearted", "gullible". Trouble-prone Sanjay is also a great survivor. As he hangs between dread and hope today, he may well be repeating to himself what his car sticker states: "Never give in".