Tells the story of the ASI as a grand official enterprise, and it is no drab institutional history... 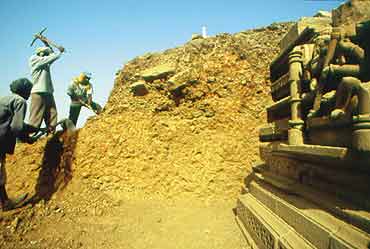 The Discovery Of Ancient India—Early Archaeologists And The Beginning Of Archaeology
By Upinder Singh
Permanent Black Pages: 381;Rs 695
Archaeology, or digging up History by scientific methods, yields three-dimensional clues about the Past, and then goes mute. It is accorded voice by the qualified diggers who sift through the disinterred ‘remains’ or decipher the stone and copper inscriptions to tell what these could have meant in times past, and their significance in the present. The most exacting of the historical crafts, it still requires a professional narrator—the Archaeologist, who second-guesses, surmises, collates, piecing together the shards and shreds to build a reasoned story. Yet precisely because of their possibility of yielding ‘treasure’, the State from ancient times to the present has sought to exercise proprietary rights over the buried parts of a country’s past, more so than over its relatively ephemeral scripted products—manuscripts, documents, books. Any digging in your backyard which yields more than the resident earthworm requires permission from the Archaeological Survey of India (ASI), a state organisation dating back to the aftermath of the Mutiny of 1857.

Upinder Singh tells the story of theASI as a grand official enterprise, from its beginnings in the 1860s under Alexander Cunningham, an army engineer and antiquarian, to its institutionalisation as a separate department in 1871, charged with surveying, unearthing and preserving the historic past remains of colonial, and now post-colonial, India. And it is no drab institutional history, nor is it propelled by the desire to show the sahib master-diggers mired in prejudice at each step in their peregrinations across British India. There was a good deal of political and evangelical rhetoric in the first proposals so as to better elicit funding from the directors of the East India Company, but Cunningham and his two assistants had consciously set out to follow the trail of pilgrims from China, notably of the seventh-century Hiuen Tsang, who had undertaken a Buddhist-Bharat darshan by travelling the length of peninsular India all the way to Sri Lanka and back.

And how much of our Ancient India was ‘discovered’ and strung together as history during the late 19th century! Sanchi, Sarnath, Kapilavastu and Kushinagar, and, in terms of the insignia of independent India, the four lions adorning the Ashokan pillar at Bhilsa which distinguish our passports and water-mark even our spurious stamp paper. Taxila, littered with Grecian small change till as late as the mid-’50s, such that the renowned French anthropologist Levi-Strauss could literally stumble upon a drachma as he kicked the dust of that ancient stone-carver’s town, a short distance from today’s Islamabad.

But a good many of the stupa sites were also ransacked for treasure, and extractable architectural pieces found their way into the ‘mother country’ or to the nascent Indian museums. The sculptures of Amravati stupa on the banks of the Krishna were boxed and shipped to distant locations, while the celebrated gates of Sanchi narrowly escaped dismantling and reassembly in Paris and London. In 1874, the government fortunately turned down a proposal to peel the Ajanta frescoes off the cave walls and paste them in a Bambaiyya or Hyderabadi museum. The Diwan-i-Am at the Red Fort in the early 1880s was functioning as an army canteen, with a liquor bar and a coffee shop. Archaeology-preservation-restoration didn’t always gell under the Raj. For our part, only a non-sectarian, capacious and reasoned commitment towards past remains can help make the nation more habitable in the present.