History Is One Blind Turn From Mohenjo Daro

Glaring omissions, faulty maps, quirky highlighting and the airbrushing of Islam off early medieval India are some surprises in this much-touted book 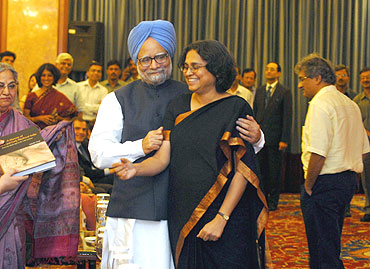 A History Of Ancient And Early Medieval India: From The Stone Age To The 12th Century
By Upinder Singh
Pearson Longman Pages: 704; Rs. 3,500
This work, issued by a leading Western publisher of textbooks, marks a landmark of sorts: its release has been accompanied by perhaps the most vigorous PR campaign on behalf of any textbook on history in India. The first two pages of the volume contain laudatory opinions from 17 scholars, ten of which appear on the back cover. Of these ten, as many as eight are from the pens of scholars holding posts in foreign universities. These authoritative experts have deemed the work to be "exciting", a "long-overdue introduction", giving us a history that "all groups of Indian people can identify with" (presumably those, at any rate, who can afford to fork out Rs 3,500), and a book destined to "supersede previous surveys of ancient Indian history".

Publishers need perhaps to be reminded that such a high-pressure campaign could be unfair to their own author. Too much comes to be expected, and a yardstick set which one is not likely to apply to works published in the normal course. The implication in some of the commendatory statements that those who have so far written textbooks and monographs on ancient India have been lacking in wider comprehension, with little idea of what history consists of, is certainly unfortunate.

It says much for the hard work Upinder Singh has put in to produce this volume that, when one starts reading her text, one can put the flashy PR prelude largely, if not entirely, behind one.

She has undertaken extensive research on a very large field; and even if, as is necessary in a textbook of this scope, she draws much on secondary work, she has managed to obtain access to a mass of material and transmits its essence in clear enough language to the reader. With certain exceptions, to be partly noted below, varied historiographic trends obtain fairly balanced representation in her account. The bibliography is fairly full, and the index is serviceable, if not comprehensive. Though the absence of diacritical marks is to be regretted, a uniform system of spelling has been largely followed. The illustrations are impressive.

It is, however, not possible to ignore some of the problems with the work. For one thing, there is throughout a tendency to emphasise any recent assertion just because it is recent, and to be rather short with older scholars’ work, especially in the area of historical texts (see, for example, the remarks, on p184, on 19th century translations). "Servants’ quarters" at Sunet, so designated by a recent archaeologist (p391), seems as off-the-mark as John Marshall’s "porter’s lodges" at Mohenjo Daro. Since one series of coloured boxes is reserved for "Recent Discoveries" rather than "Crucial Discoveries", some recent finds tend to obtain much greater significance than is perhaps their due.

In her preface, Upinder Singh claims that while "historians and teachers" normally try to teach students "what to think", she has planned her work so as to make students "think for themselves". It is, however, still true that the author does have some affiliations and aversions. She censures Marxist historians for being "text-centric" (p87), as if for ancient Indian culture, polity and society, one can put inscriptions and written materials in a secondary place and build mainly on archaeology. Nor is it correct that Marxists have paid insufficient attention to "caste", when D.D. Kosambi, R.S. Sharma and S. Jaiswal, among others, have devoted so much of their writing to it. A tendency which excites Singh’s particular hostility is "Diffusionism", on which she supplies a box (p139). Contrary to the practice in the box on "defining a state", where definitions, often of a rather naive kind, from recent western writers are set out (p177), the box on Diffusionism forbears mentioning a single scholar’s name, while excessively amateurish ideas are freely attributed to diffusionist theorists. Surely, examples of arguments at this level (if available!) should have been drawn from the likes of V. Gordon Childe or Joseph Needham, two major figures who have explored the processes of diffusion of ideas, technologies and customs. The aversion to admitting diffusion seems to greatly limit Singh’s own narrative. The insistence on the early wheat- and rice-producing areas within India being "independent centres" of food production (p95) ignores much botanical evidence to the contrary. One finds this attitude also reflected in her rather low-key account of Indo-European origins (pp185-86). The geography of the Rigveda, so well defined by its famous river-hymn, is not discussed, nor is the eastward geographical shift noticeable in later Vedic texts. The reader is thus prevented from constructing any view, on his own, of a migration or cultural diffusion from such evidence.

Singh’s discussions of religious developments are generally even-handed, but the dismissal of the Jains, Buddhists and Ajivikas as mere "renunciants" in the title of Chapter 6 should be reconsidered. Some chapter titles are rather odd, such as "Interaction and Innovation" for the period 200 BC-300 AD, or "Emerging Regional Configurations" for "the early medieval period", 600-1200 AD. The characterisations are not convincingly supported by the author’s own text. Rather surprisingly, Islam, despite its widespread implantation in the Indus basin from the early eighth century onwards, and the arrival of Sufism, with Hujwiri’s text on it composed in Lahore in the 11th century, is not covered in her detailed account of the religious scene in the early medieval period, except for a seven-line paragraph on p604. The flourishing urban economy of Sind, with Mansura as a great archaeological site, is also overlooked; so also the Arab accounts of India of the 10th century, and the transmission of Indian learning to the classic Islamic world. This is all the more strange, when we find her recording in her preface an unfulfilled ambition to go on further and rather illogically include the Delhi Sultanate also in her account of the early medieval period.

The maps, with their coloured physical base, are pretty to look at, but are unluckily so inaccurate and often so misleading that one wonders whether it is wise to have them there at all. A few examples have to suffice here. Map 2.3 ("Major Palaeolithic sites", p70) shows such well-known sites as Kalpi, Baghor, Belan valley, Jhansi, Lalitpur, Mandasore, Bhopal, Rohri Hills, Las Bela, Nasik, Goa and Kurnool at spots hundreds of kilometers and, in some cases, regions away, from their correct positions. Mehrgarh, the earliest agricultural site in the Indian subcontinent, is differently positioned on maps 3.2 and 3.3 (pages 107 and 109), and both spots are wrong. On map 7.1 (p328), the two important sites of Ashoka’s rock edicts, Shahbazgarhi and Mansehra, are wrongly plotted: the former to the south of the Kabul river and the latter to the west of the Indus. In the latter case, the reader loses the sense that Mansehra could have been on the route to Kashmir. Even Khajuraho is wrongly plotted on map 10.4 (p566).

Perhaps, the Taj hotels, resorts and palaces did not give a "generous grant" enough for the publishers to bring out the text book at a more affordable price.

Man Made The Deluge