History In The Breaking 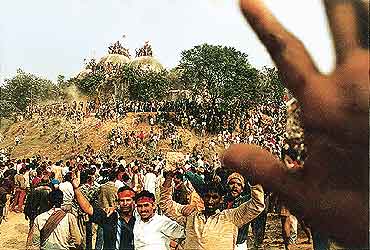 The debates on these themes are rich, though sometimes marred by acerbity and polemic. Moreover, we are still dimly aware of the energy that pulses behind the concerted effort to create, in the late ’80s and early ’90s, a Hindu rashtra through cultural and intellectual homogenisation of Hindu society. Opinions will differ, but an important lesson has to be drawn from L.K. Advani’s statement in early 1992 that, "we are not a dharmik sabha (religious body). We are primarily a political body".

Similar statements from other quarters conveyed the distinct impression that repudiating the agenda of Hindu-Muslim reconciliation, outlined by the ‘founding fathers’ of the Constitution in the aftermath of the Partition, was at the heart of the Hindutva philosophy. Indeed, the planned assault on the Babri Masjid was intended as a big jolt to the secular ideal through a process of ‘Hindu awakening’.