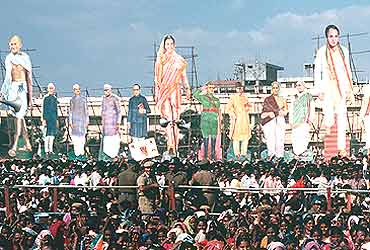 To study the past as it was is also to speculate about the past as it might have been. What if Hitler had successfully invaded Britain in 1940? Would German now have been the language of international commerce? What if Lenin had died on the train that took him back to his homeland in 1917? Would Russia now be a constitutional monarchy on the British model? And, closer home, consider these intriguing questions: what if Mohammed Ali Jinnah had died in 1958 instead of 1948? Would Pakistan then be as solidly established a democracy as India? And what if General Yahya Khan had allowed Sheikh Mujibur Rahman to take office as prime minister of Pakistan in 1970, to honour the popular mandate in his favour? Would there yet have been a Bangladesh?

For generations, professional historians were trained to rigorously eschew questions such as these. The founder of modern historiography, the 19th-century German scholar Leopold von Ranke, dismissed the idea that history "ought to judge the past and instruct the contemporary world as to the future". The historian’s job was "merely to tell how it really was". For Ranke, the "strict presentation of the facts" was the "supreme law" of history.

This was an exact, dreary and impossible credo. For were not the same facts susceptible of multiple interpretations? And the same individual too? Winston Churchill did more than anyone else to safeguard the freedoms of the British; without him the island-nation might have been delivered into the hands of the Nazis. But the same Churchill was a vicious opponent of freedom for coloured peoples. As Leonard Woolf once pointed out, if the British government had been prepared to grant to Indians "what they refused in 1940 but granted in 1947—then nine-tenths of the misery, hatred, and violence, the imprisonings and terrorism, the murders, flogging, shootings, assassinations, even the racial massacres would have been avoided; the transference of power might well have been accomplished peacefully, even possibly without Partition". British historians venerate Churchill; Indian historians tend to deprecate him. What goes for individuals goes for political events as well. A Marxist historian would judge the Russian Revolution very differently from a conservative one. The American Civil War was seen very differently on either side of the Mason-Dixon line.

Over the years, there have been historians who, dinosaur-like, stuck doggedly to the Rankean ethos. They aspired to make history a ‘scientific’ discipline, professedly neutral as well as objective. But others were more daring. They understood that while a historian is not a novelist, the facts he gathers have to be interpreted, and then judged. Indeed, the best historians, or at any rate the most readable ones, have been splendidly opinionated.

For all this, the professional historian remained a Rankean in one respect; while he might provide an alternate interpretation of what had been, he would not speculate as to what might have been. He would not ask the ‘What If’ question. This was one Lakshman-rekha he wouldn’t cross.

In the past decade, however, this line has been crossed by scholars working in Britain and the United States, countries in which there is a huge market for popular history, as conveyed by books and more so by television. Here, the historian is somewhat less out of tune with the popular sensibility. And the fact—the word is inescapable—the fact is that individuals are asking themselves ‘What If’ questions all the time. We know well how our personal lives are determined by chance and contingency. A meeting at a party leads to a long-lasting (and happy) marriage, but what if a headache had made one stay at home instead? Would one have then made a disastrous alliance?

We ask such questions of one another, and now we have been encouraged to ask such questions of historical figures and historical events as well. In 1997, British scholar Niall Ferguson edited a collection called Virtual History: Alternatives and Counterfactuals. A couple of years later, Robert Cowley put together his What If?: The World’s Foremost Military Historians Imagine What Might Have Been. Cowley followed this with More What If? Eminent Historians Imagine What Might have Been. The success of these books makes the appearance of a volume entitled ‘Still More What If?’ a near-certainty.

Among the questions asked (and answered) in these books are: what if there had been no American Revolution? What if Britain had stayed out of what became the first world war? What if John F. Kennedy had lived? What if Pontius Pilate had spared Jesus? What if Napoleon had successfully invaded America? What if the US hadn’t dropped the atom bomb on Japan?

All interesting questions, each productive of rich disagreement and fine literature. But none with any real relevance to India and Indians. Our history would have been much the same had Jesus and John F. Kennedy not met violent deaths, or had Japan finally surrendered only after a land war in 1945. The same cannot be said of the questions posed, and answered, in this issue of Outlook. Here we have a compelling array of Indian ‘What Ifs’, a whole range of possible ways in which our history, our politics, our society, even our music, might have turned out very differently from how it actually has.

As the authors of these essays would cheerfully admit, their answers are anything but definitive. I have not read them as I write this, but I know that my own answers will naturally differ with those here provided. ‘What if India had not been partitioned?’ My answer: within a decade, there would have been a bloody civil war on the question of the national script. Hindu and Muslim politicians would have agreed on a common language called ‘Hindustani’, but each would have insisted on their own script: Devanagari in the one case, a modified Arabic in the other—both holy, associated with the Word of God, to be fought for to the death. ‘What if Vallabhbhai Patel, not Nehru, had been India’s first Prime Minister?’. My view: the Congress would have become more right-wing (and pro-Hindu), with Nehru leaving to start an opposition party which, with his charisma (which far exceeded Patel’s), would have swept to power in the first general elections. So, I fear, this most remarkable and simultaneously most reviled of modern Indians would have become prime minister after all.

The essays here printed will be educative as well as entertaining. But they will not, indeed cannot, be authoritative (as the Letters pages of future Outlook issues will doubtless show). At the same time, while the range of questions asked here is very wide, it is by no means exhaustive. Consider three of my own favourite questions, unasked in the pages that follow. The first of my questions is: What if Jayaprakash Narayan had accepted Jawaharlal Nehru’s invitation to join the government in 1953? The previous year, JP’s Socialist Party had been humiliated in the general elections. But Nehru, as the progressive leader of the winning party, was surrounded by a bunch of crusted old reactionaries. As Time magazine wrote in July 1951, after attaining Independence, the Congress "found itself without a unifying purpose". It had grown "fat and lazy", and harboured "many time-serving office-holders, not a few black-marketeers".

Nehru knew this, which is why he sought to reach out to the Socialists who were themselves former Congressmen. He asked JP and his brilliantly gifted colleagues to return to the fold, to help him give the party, and nation, a unifying credo built around secularism and economic development. I have long thought it a pity that JP refused. For the socialists were men and women of idealism and courage. If they had joined Nehru’s government, then perhaps India would have eradicated illiteracy within a decade and brought about real land reforms. And perhaps our foreign policy would have been genuinely non-aligned (for JP had no illusions about the Soviet Union), and more sensible of the Chinese threat (which JP recognised far in advance of Nehru).

My second question: what if India had signed the Comprehensive Test Ban Treaty in 1997? The hawks in Delhi argued that to sign the treaty would be to succumb to "nuclear apartheid". For them, white people did not have a Divine Right to the bomb. The government listened to the hawks, refusing to sign the treaty, and tested the bomb the following summer. I personally think they should have listened to the handful of dissenters who wanted us to sign. For then, the Pakistanis would have had to sign as well; after which their N-facilities would, for the first time, have been opened to international inspection. Signing the ctbt would have de-escalated tensions in the subcontinent. As we now know, even from a strictly strategic point of view, not to sign the ctbt and to test the bomb were mistakes. For we’ve nullified our advantage in conventional weaponry, and succeeded only in internationalising the Kashmir issue. I come now to a third misjudgement, committed by a foreigner this time, but one from which Indians think they have benefited. I refer to the fateful decision, taken at Lord’s Cricket Ground on a sunny June day in 1983, by Gordon Greenidge not to offer a shot at a modest medium-paced delivery bowled by the amiable Balwinder Sandhu. The ball went not outwards (as the batsman expected) but came in, to clip the off bail and start an unexpected slide. But what if Greenidge had played a shot? Then West Indies would have won their third World Cup in a row.

Our cricketers were lucky in Greenidge’s error, and luckier still in its coinciding with the spread of television. Recall that at the time Indian hockey was not doing badly at all. We had won the 1975 World Cup, and the 1980 Olympic title. If Greenidge had not been bowled looking on, might not hockey have instead benefited from the television boom of the ’80s and beyond? Wouldn’t the money that has since poured into cricket been spent rather on better facilities and more attention for hockey, this in turn encouraging ambitious and athletic young men to take to the sport? In sum, if Greenidge had been more alert, then hockey might still have been India’s national sport. And India’s most ubiquitous face, smiling at us from road hoarding and television commercial, might have been Dhanraj Pillay rather than Sachin Tendulkar.

I can hear the howls of protest already. Admirers of JP will say that I wanted him to sell out to the state. Militant (and militarist) nationalists will ask how Mother India can defend itself without the Hindu bomb. And gentle lovers of cricket will wonder why I, a cricket writer myself, would wish that this most glorious of games were relegated to a marginal place in our national imagination.

I do not know what the editors of Outlook expect of this issue, but my own hope is that it will help make Indian history more appealing to the common man (and woman, and child). For at least in the matter of entertainment, we have been poorly served by our historians. This, without question the most interesting country in the world, has produced historians who are earnest, historians who are studious, historians who are dull. So let’s get beyond their petty battles, to present history not as ideology, but as fun.

Guha’s books include Savaging the Civilised and A Corner of a Foreign Field. He is now working on a history of free India. ramguha@vsnl.com.

Tel Aviv 1952: What if pacifist Albert Einstein had accepted an offer to be Israel’s second President?

Gondwana 96 m BC: What if continental drift sequence hadn’t happened? Would India be part of Australia?