The arcadia of a Hindu India is an ideal. Communalists must see how, in truth, it mirrored the demonised others. 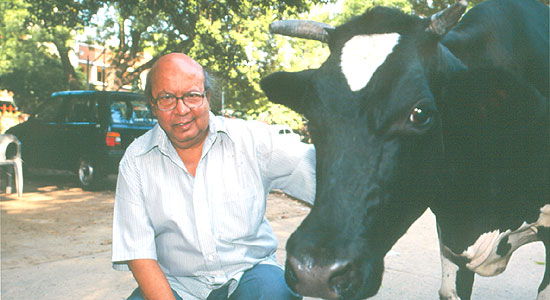 This book by the eminent historian D.N. Jha, a former president of the Indian History Congress, is very timely. With characteristic bravery, Jha minces no words and confronts the many shibboleths and stereotypes that form the ideological basis of the Hindu right wing’s vicious communal politics.

Hindu communalists argue that the ‘Hindus’ were the original inhabitants of India. In their eyes, even the inhabitants of the Indus valley civilisation were Hindus. Doing much violence to history, they push back the Vedic period by several centuries to justify their claim. For more modern times, they extend the argument that others such as Muslims and Christians are foreigners and therefore must accept Hindu hegemony. It is also claimed that ‘Hindus’ were a tolerant, non-proselytising, cow-loving people in contrast to the violent, beef-eating Muslim marauders who carried out forced conversions, destroyed temples, libraries and ‘humiliated mothers and sisters’.

Jha crushes the false claims of Hindu antiquity. The monolithic ‘Hindu’ was itself a colonial construct, aided by communalists.

The RSS, the fountainhead of the Hindu communal combine, has been propagating these stereotypes through their shakhas in mohallas and villages as well as through thousands of schools run by them. During NDA rule, there was a nation-wide protest against the bjp when it tried to teach this kind of history through school textbooks even in government schools. Significantly, before such books could be introduced, the NDA government unceremoniously sacked Jha from the chairpersonship of the History Syllabus Committee of the CBSE.

But Jha could not be silenced. In this magnificent little book, he demolishes the false claims of antiquity made on behalf of an imaginary ‘Hinduism’ said to exist in that period. He argues that the monolithic category ‘Hindu’, as it is often understood today, was a colonial construct further cemented by their allies, the Hindu communalists.

Jha also shows the plurality of religious traditions in India which did not necessarily coexist in harmony. He concedes that there was some mutual accommodation between multiple sects, which “borrowed a great deal from one another, leading to the growth of composite cultures over the centuries”. Yet, like in any other pre-modern society, India also witnessed violent antagonisms—such as those amongst Brahminical sects as well as with heterodox sects like Buddhism and Jainism. Violent clashes and forced conversions were not uncommon and were not to be associated only with Islam and Christianity, as they were routinely employed by Hindu fanatics.

Finally, Jha literally questions the ‘holy cow’ of Hindu communal belief. He argues that the notion of the sacred cow emerged only in the early medieval period. He furnishes ample evidence to show that in the Vedic period cows were routinely slaughtered and eaten; Brahmins would serve cow meat to their guests on special occasions—a fact which was readily accepted even by Swami Vivekananda, though numerous lives have been lost subsequently through hostility with Muslims on this issue.

While fully agreeing with Jha’s critique of Hindu bigots bent on rewriting history, I would disagree with his assessment of Bal Gangadhar Tilak as “the forerunner of the (the) militant Hinduism of subsequent years expounded by V.D. Savarkar, K.B. Hedgewar and M.S. Golwalkar....” There is much evidence to show that Tilak, often described as India’s first social democrat and one of the moving spirits behind the formation of the AITUC, subscribed to a vision of Hinduism completely different from the RSS notion of Hindutva. He was certainly not anti-Muslim. When criticised for building up Shivaji as a hero, Tilak retorted that if he was working in north India, Akbar would have been his choice.

The tendency of a section of the Left to hand over nationalist leaders like Tilak, Patel, even Gandhi to the communal side has done great damage to the struggle against communalism. Communalists, with no ancestry whatsoever in the freedom movement, welcome this. They try to appropriate them as their heroes—witness the recent attempts by L.K. Advani and Narendra Modi to appropriate the legacy of Sardar Patel.

(Aditya Mukherjee teaches contemporary history at JNU and is co-author of RSS, School Texts and the Murder of Mahatma Gandhi, Sage, 2008)