He was not aspiring to be Balraj Sahni. He was a superstar and he wanted to be accorded his rightful place. 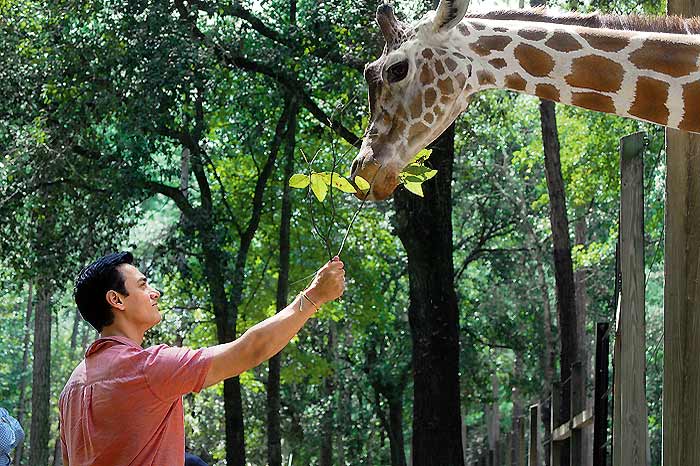 The summer of 2007 brought me a rather unusual invitation. Unusual, because the round table conference in Florida that I was invited to participate in—pompously called the Leadership Project—had little in common with my vocation. But the real hook for me was the opportunity to meet Aamir Khan, who too had been invited—and had consented to come.

Aamir came across like the character he had played in Dil Chahta Hai, charmingly unassuming. He took his wife Kiran Rao’s environmental concerns seriously. When she objected to the engine of our monstrous safari jeep idling every time we stopped for a sighting in the 7,400-acre Wild Oak park, Aamir dutifully went up to the driver and asked him to switch the engine off.

Finally, after doing our bit to save the world in three sessions, we had some time to luxuriate at the sprawling facility. All of us had been allotted chalets to be shared with a fellow delegate. Aamir and Kiran, of course, had been given a chalet of their own, complete with a swimming pool and a sauna. They very generously invited some of us to hang out in their chalet. And what an afternoon it turned out to be.

Aamir’s entourage consisted of a three-member personal staff. A bodyguard who doubled as a physical trainer, another who did his suitcases, and a third who was his feeder (read on). Aamir was about to shoot for Ghajini and had to look big and brawny. Mr Feeder’s job was to make sure Aamir followed the dietary regimen. Every hour, he would bring an egg yolk balanced precariously on a spoon to pour into Aamir’s mouth. This, a rather strange ritual, went about in a very matter-of-fact way.

All evening, Aamir regaled us with anecdotes about the co-stars, producers, directors he had worked with, and his family with great candour. He told us that when Tahir Hussain (Aamir’s producer-father) offered Jeetendra a double-role, Jumping Jack quipped: “Mujhse ek role ki acting to hoti nahin hai, double role kaise karoonga!” He said he watched few films, but read a lot. He didn’t think much of Sholay or any other film—save his own.

Our adda eventually thinned out and I could feel the star becoming more at ease. But I could also sense a rancour. Aamir could not hide his disappointment that he was still not regarded like a Amitabh Bachchan or a Dilip Kumar despite two decades of stardom and a dozen runaway hits. Ghajini, Taare Zameen Par and 3 Idiots had not yet happened; another Khan was King.

Aamir felt Shahrukh Khan managed the media very well, giving the impression that SRK’s movies were all superhits. He rattled off box-office figures to prove that all of his movies had fared better than SRK’s. The Aamir Khan I was now chatting with had shades of Satyajit Ray’s protagonist Arindam Mukherjee, played by Uttam Kumar, in Nayak. A superstar at the helm of stardom, struggling to be at peace with himself.

I then advance a meek defence, saying, “Outlook has put you on its cover twice.” To which Aamir charged, “But India Today had me on its cover three times.” I said, “Look Aamir, the dignity and gravitas you bring with the characters you play and the high probity you display in public life makes you the modern-day Balraj Sahni, a fine actor and an exemplary citizen.”

The moment he heard the B-word, Aamir’s expression changed from an accommodative amiability to a grim grey.

By way of placation, I attempted another salvo. “When Amitabh Bachchan, hailing from a literary family, wanted to join the debauched film industry, his first director in Saat Hindustani, K.A. Abbas, cited Balraj Sahni to AB’s father Harivanshrai: ‘An industry with which a man like Balraj Sahni could associate himself, your son too should be able to survive honourably’,” I said.

Aamir saw red. He was not aspiring to be Balraj Sahni. He was a superstar and he wanted to be accorded his rightful place. Saat saal baad, surely he has got it?