Some see it as a tacit capitulation, one that affirms Pakistan's role in Kashmir 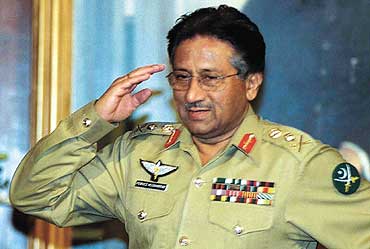 outlookindia.com
-0001-11-30T00:00:00+0553
Prime Minister Atal Behari Vajpayee's offer of talks to Gen Pervez Musharraf has been perceived here as a diplomatic triumph for Pakistan and a belated acceptance by New Delhi that its Kashmir policy has failed to yield tangible results. For not only has New Delhi retracted its demands that there would be no parleys with Islamabad until it stopped abetting cross-border terrorism, it has also agreed to talk to the person whom it had described as the 'butcher of Kargil'.

Says Prof Khalid Mehmood of the Institute of Regional Studies, "This is a diplomatic success for Pakistan, as New Delhi has now done away with any conditions for future talks. Also, Jaswant Singh's comments show that Vajpayee is willing to discuss Kashmir. Despite New Delhi's misgivings about Musharraf, this offer is also a recognition of the military regime."

The Daily thought New Delhi has tacitly accepted that the Kashmir issue can't be resolved without Pakistan. "By inviting…Musharraf for talks, the Vajpayee government has in a way broken the self-imposed impasse created after Kargil. India's admitted, albeit implicitly, that it can't proceed an inch… without involving Pakistan... The obduracy of the Indian attitude has apparently cracked. Yet, Islamabad must grasp the initiative and employ all energies to find some ground to move forward."

Indeed, most here believe New Delhi's offer of talks is an indirect acceptance of its inability to treat the Kashmir issue as a mere law and order problem. Says Prof Mehmood, "New Delhi tried every trick but failed. First it said that it would talk only to Kashmiris and not Pakistan. It tried to treat the problem as an internal one but the ceasefire gambit did not produce results. The wedge it wanted to create between the Hurriyat and the Kashmiri people also failed." In other words, New Delhi was left with no option but to initiate dialogue with Islamabad.

Others think New Delhi blinked due to the mounting international pressure. Says Gen (retd) Talat Masood, regarded the guru of Track II diplomacy, "Unlike bus diplomacy, this time we had nothing to do with the invitation. Of course, I'm not surprised as important people in India were for this meeting. There are compulsions for both leaders. I strongly believe that the Chinese premier advocating peace on his visit to Pakistan and the ensuing nervousness in Washington at Islamabad and Beijing cosying up prompted the Bush administration to nudge Delhi."

But there is also apprehension that the invitation could be a trap. The News cautions, "If under the cover of holding talks with Pakistan a new wave of repression, violence and criminality is unleashed on the besieged Kashmiris and the innocent, brutalised civilians, the invitation to Musharraf may turn out to be nothing more than a deception.."

Adds Jamaat-e-Islami chief Qazi Hussain Ahmed, "The offer should have been preceded by confidence-building measures. Though I support dialogue on Kashmir, India should have, as a gesture of sincerity, first withdrawn its forces from Kashmir and included genuine Kashmiri leaders." In fact, Al Badr's ameer, Bakht Zamin Khan, bristles, "The mujahideen have been told to step up activities against the Indian army as the offer of talks is only a ploy to gain international sympathy."

Indeed, most believe the proposed talks can yield results only if the Kashmir problem is addressed directly. As foreign minister Abdul Sattar pointed out, "Kashmir will remain centrestage, as a settlement in conformity with the will of the Kashmiris will bring an end to their travail.It will also remove the root cause of the tensions that has blighted Indo-Pak relations since 1947." This shows that Islamabad considers Kashmir to be a trilateral problem and that a meeting between Vajpayee and Musharraf must ultimately recognise this.

It's anybody's guess whether or not there will be any chemistry between Musharraf and Vajpayee. Unlike all the Pakistani leaders—Nawaz Sharif, Zulfiqar Ali Bhutto, Ayub Khan and Zia-ul-Haq—who met their Indian counterpart, Musharraf has absolutely no support from the people and politicians here. No wonder The Nation advises that in order "to take a position in consonance with national interests and to strengthen his hands during negotiations, the general needs to take into confidence all political parties represented in the suspended assemblies, as was done by Bhutto prior to Simla... Without this, any deal he brokers is liable to raise a storm at home".

But then, the path to peace is always doomed to be long and tortuous.