Will Robert Vadra’s acts besmirch the illustrious family name that may have earned him undue favours? 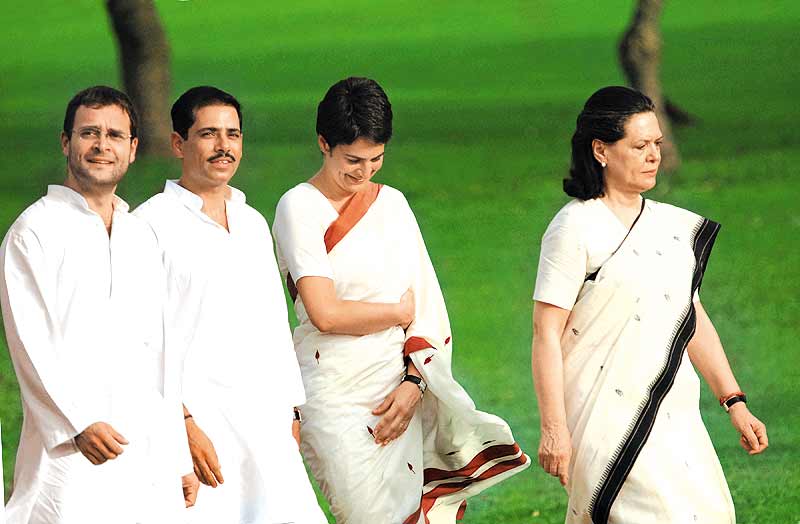 We, the mango people of India, should be both angry and dismayed at the get-rich-quick tale of Robert Vadra. We must accept that the legacy of the nation’s first prime minister—that man of ideas, integrity and dignity—has been sadly diminished. The Ideas of India are now reduced to the Real Estate Acquisitions of the First Damaad of India. FDI has suddenly taken on an all-new meaning.

Perhaps we should agree with Vadra’s Facebook comment that this is a banana republic. If so, it is one where individuals like him, appendages of political clans, make a monkey of the aam aadmi by getting land, help and interest-free finance. Vadra’s fortune is so clearly built on a fortunate marriage. He may have done nothing criminal, but he has certainly wielded influence to get rules bent, and that is improper, particularly for someone linked with this particular family.

There is something quite crass about the entire snatch-and-grab-land episode. Rippling muscles, legs astride fancy motorbikes, Vadra has always appeared a bit of an interloper in the first family that is usually associated with a certain elegance and class. But ‘We, the mango people of India’, mostly ignored Vadra outside the small circle in Delhi where rumours about his business deals have been doing the rounds for a while. The larger public never gave the man a thought. Now it seems that the husband to a Gandhi-Nehru, father to the next generation of the dynasty, applied the bodybuilding steroid technique to build his little empire really fast. He just can’t be ignored any longer. His face and form now impose on that cosy family album frame. There is so much history, drama, tragedy attached to the family—even family-baiters grant that. In that grand scheme of a family whose tryst with destiny shaped India’s history, the Vadra episode is just plain tawdry. 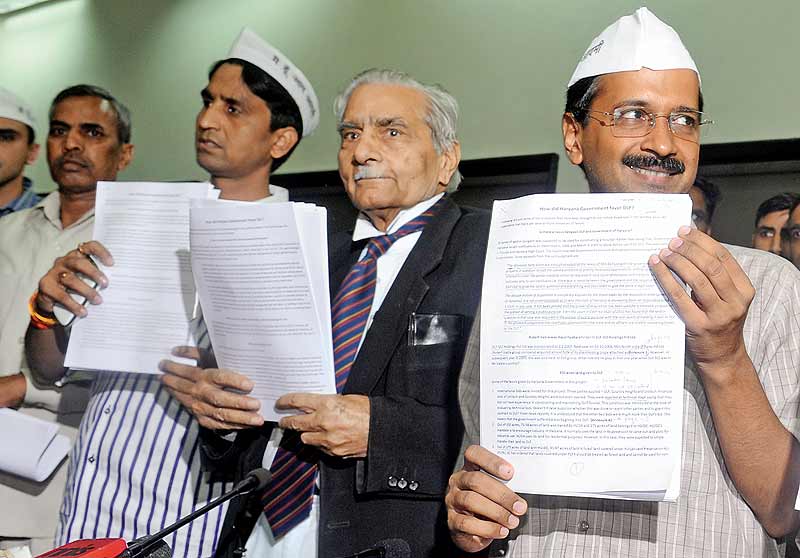 Within the State of India is the Republic of Hooda, a CM who’s a past master at quid pro quo.

It has been established without doubt that crony capitalism is not confined to places like Jharkhand where Madhu Koda made a fortune and landed in jail for it. Perhaps it has been most shamelessly (and shamefully) on display in states like Tamil Nadu and Andhra Pradesh, Karnataka and Maharashtra, where the nexus between business and the political class has been repeatedly exposed. It is more than amply clear now that, in post-liberalisation India, politics is far too often used as an instrument to extract cash, favours and land for a handful of individuals, mostly businessmen and politicians and their families or the new prototype of the politician-businessman.

The best thing Vadra has going for him is the fact that the ruling class, which includes the Opposition, media and business, is uneasy with this sort of expose, one that questions land deals and the nexus between India’s leading builders and the first political dynasty, particularly in Haryana. For within the Indian State is the Republic of Hooda, that begins on Delhi’s periphery and is one of the most valuable real estate stretches in the country. Haryana CM Bhupinder Singh Hooda is a master player in the game of quid pro quo and influence-peddling. He is said to know exactly how to keep important citizens of Delhi happy: by giving them real estate in Haryana at throwaway prices. He has been the rare CM in the Congress circuit to have rarely had trouble with the high command. Now it’s apparent that he has been good to the first son-in-law.

DLF, Hooda’s government spokespersons and the Congress have all naturally tried to pick holes in the argument and trash Arvind Kejriwal and friends. As more details of the Vadra affair emerge, the Congress has on the record tried to put up a (largely unconvincing) defence—off the record, they know it’s another disaster—but have belatedly tried to step back from one of the more damaging episodes in the dynasty’s history. (The party’s dirty tricks cell was back in action on Thursday, though, with allegations about Prashant Bhushan’s trust-owned land in Himachal Pradesh.)

One need not be enamoured of India Against Corruption to recognise the fact that only a wildcard entry like them could have gone to town with this story. After all, it has been in circulation for a while, and a section of the BJP leadership actually stopped the party from making Vadra an issue (another form of quid pro quo?). Enter Kejriwal, obviously desperate to make a mark and enter politics with a splash. Something he has certainly managed.

Even for the BJP, it’s a hot potato. Recall the other damaad, Ranjan Bhattacharya, who got rich quick.

There’s a certain noticeable wariness in the BJP. For one, Narendra Modi, on the campaign trail in Gujarat and never shy of attacking the dynasty, has been strangely silent on the Vadra issue till the time of writing. What is fuelling the caution? Could a long-distance runner like Modi be guarded about picking up an issue raised by a force that could be an unguided missile? Could it be that he sees himself as the redeemer of the middle classes and does not want any non-traditional usurper to start hogging headlines at a time that he must believe belongs to him?

There is, of course, the belief that the next big target for Kejriwal & Co would be BJP president Nitin Gadkari. But given the internal equations within the BJP, it is hard to see Modi shedding tears for Gadkari with whom he has had an uneasy relationship. This episode has also had an unfortunate outcome for Sushma Swaraj who is widely believed to have stopped the BJP from going ahead with raising the Vadra issue earlier this year. She has been critiqued by party cadres and there are a lot of rude comments on her Twitter account.

For the Congress, it’s all-round bad news. Consider the SMS joke doing the rounds—Rahul to Sonia: “Mummy, first CWG, then 2G, then Coal-G, and now Jija-G!” But even for the BJP, this is a hot potato. There are enough scandals involving its leaders, including the dealings of another first damaad, Ranjan Bhattacharya, married to former PM A.B. Vajpayee’s foster-daughter. A hotelier by profession, he too had acquired considerable wealth at short notice. Perhaps a comparative study of the sons-in-law of India’s politicians is called for. Meanwhile, the BJP would both be worried about the Kejriwal force turning on them, or alternately stealing some of its space and thunder at a time when another scandal has hit the Congress.

“China Was The Aggrieved; India, Aggressor In ‘62”