His Holiness... The Dilemma

Yes, he's a thorn in our ties with China. But is that enough for us to castigate the Dalai Lama or forsake the Tibetan cause? 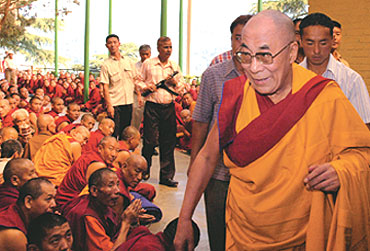 "Tibet will not die because there is no death for the human spirit.... Tibet will be resurrected."

If resurrection means finding space in the minds of world leaders and electrifying international media and civil society after a gap of decades, Tibet has—temporarily at least—been resurrected. And in its resurrection, the spotlight has fallen on a maroon and ochre-robed monk who is, as he says in his autobiography Freedom in Exile, different things to different people. For his followers, the Dalai Lama is a living Buddha. For much of the world, he is the embodiment of Tibet in all its dimensions—political, spiritual and cultural. For India, he is a "respected guest" not expected to engage in political activities, as external affairs minister Pranab Mukherjee found it necessary to tell China this week. And in the Cultural Revolution argot favoured by Zhang Qingli, head of the Communist Party in Tibet, he is "a wolf in monk's robes, a devil with a human face but the heart of a beast". 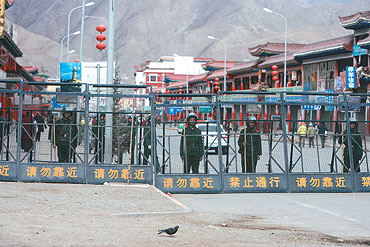 Restive hillside: Chinese anti-riot police stands guard at a barricade separating the Chinese side from Tibet in Xiahe town

When an uprising in Tibet last month cast a dark shadow over China's projected triumph—the 2008 Beijing Olympics—it promptly accused the Dalai Lama of masterminding it. When the world media rushed to Dharamshala, where he lives, the charismatic monk delivered a firm rebuttal. He said he had not incited the violence in his Himalayan homeland, nor did he condone it; and he held China guilty of committing "cultural genocide" and "demographic aggression" in Tibet. In the fraught days that followed, the Dalai Lama spoke of peace and reconciliation but also expanded on his charges against the Chinese.

As India and the world watched him, questions arose: Is the Dalai Lama violating his compact with his hosts by engaging in political activity on Indian soil? Is he embarrassing India in its conduct of a complex relationship with China? Does his presence here, along with more than one lakh Tibetan refugees, complicate India's tightrope walk on Tibet?

These are not new questions. The Dalai Lama, among his many personae, is also an old thorn in India's relationship with China. For those with 50-year-long memories, China's tantrum last month over Tibetan protesters scaling a wall of the Chinese embassy in Delhi was deja vu. Understanding Indian democracy has always been difficult for the Chinese: they fumed in 1959 when Indian protesters pelted a picture of Mao Tse Tung pasted on a wall of their Mumbai consulate with eggs and tomatoes to show solidarity with the Dalai Lama and other Tibetan refugees who had recently arrived in India. Not reassured by the cold print of the 1954 Panchsheel Agreement through which India recognised Tibet as a part of China, China seethed at the "impressive welcome" accorded to the 23-year-old 'god king', and the freedom he was given to tell his story to the world.

"The Indian establishment strongly believes that taking in the Dalai Lama was very costly to India, that it led to the 1962 war with China. That is why successive generations of Indian bureaucrats have wanted to wash off the Tibet card," points out Srikanth Kondapalli of the East Asian studies department of Jawaharlal Nehru University. It did get washed off, bit by bit. During Rajiv Gandhi's 1988 visit to China, and A.B. Vajpayee's in 2003, Indian assurances became increasingly more pleasing to Chinese ears, defusing the potential for trouble over Tibet. Even if the Dalai Lama's rise to global stardom and the continued existence in India of his 'government-in-exile' rankled with China, it could take consolation from the fact that the political cause he embodied had gradually faded away in everybody's priorities, for geopolitical and other reasons.

Cut now to 2008, and Tibet's resurrection. The present uprising, timed to refocus the world's attention on Tibet as China prepares for Olympic glory, is the most significant eruption of the Tibet issue since 1959. (Earlier uprisings were not on the same scale and did not have the same international impact.) If for China it poses a crisis of credibility and image, for India it poses a dilemma—the only too familiar one of how to avoid offending China without appearing to appease it. As many analysts point out, India cannot be seen as a base for subversion on the Tibet issue, nor can it be seen to be clamping down too hard on Tibetans in violation of its own distinct political values such as democracy and respect for the rights of refugees. And history, suggests Michael Yahuda, a visiting professor at George Washington University, in the US, remains an actor in the drama. "Despite all the formal treaties and statements between India and China on Tibet," he says, "there is still a strong suspicion in China that India would like to follow the British policy of meddling in Tibet." 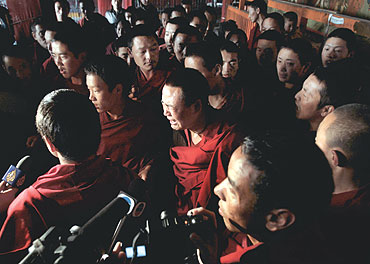 Cry, the Beloved Country: Tibetan monks cry out in protest during a foreign correspondent’s visit to Lhasa’s Jokhang temple

Against this canvas, it has to be said that the Dalai Lama's presence on Indian soil complicates matters for New Delhi. It has already done so, as seen from apparent Chinese unease over US House Speaker Nancy Pelosi's visit to Dharamshala, the summoning of Indian envoy Nirupama Rao at an unseemly hour to express displeasure over the embassy wall incident; and the exclusion of India—the one country that has the maximum stake in seeing for itself what's happening in Tibet—from the group of envoys taken to tour the troubled region. "In the coming days, if India is unable to secure the embassy or the Olympic torch against protests, it will certainly be problematic in relation to the Chinese," says China scholar Alka Acharya, a member of the National Security Advisory Board.

Meanwhile, the Tibet crisis has got embroiled in the domestic debate on how India should deal with China. This is inevitable, given the complexity of relations between the two countries. Trade is growing exponentially and ties are politically stable. But there is also geostrategic rivalry and the festering border dispute. Apart from the two familiar sparring partners—the "pro-China lobby" consisting of the Left and others and the "anti-China" brigade in the strategic community that favours a harder line with China—a pro-Tibet current in Indian opinion, represented by socialists and a network of assorted India-Tibet groups, is also adding its voice to the clamour.

However, underlying all the talk of standing up to China and reversing the neglect of the Tibet cause, there seems to be a tacit understanding across the spectrum that the broad contours of India's Tibet policy, laid down in the Panchsheel and successive agreements, can't be changed. The debate is, really, all about the value of small steps, nuances, inflections and calculated omissions. And not surprisingly, the Dalai Lama features at both ends of it.

At one end, the monk has, it seems, been invested with yet another persona—of being a "Tibet card" that India has neglected to use in the past but could now play, some commentators suggest, to subtly flex its muscles with the Chinese. Says former Indian diplomat G. Parthasarathy, "It is not right to talk of human beings as cards. However, Tibet does give us a moral authority in dealing with China. Here are a people being pushed, a la American Indians, into reservations, and we are the ones who have provided them a haven. If we use this authority, China may be less aggressive about its border claims." Parthasarathy also commented that Pranab Mukherjee's statement on the Dalai Lama, even if it was mainly meant to be a reiteration of policy, "can give the impression of cautioning the Dalai Lama, which is playing into Chinese hands. The Dalai Lama's responding to Chinese slander and allegations about him promoting violence in Tibet does not constitute political activity".

At the other end of the spectrum, the Dalai Lama's statements are being analysed differently. "It can't be said that the Dalai Lama incited the violence," says Acharya, "but he has not been standing up and appealing to people to stop the violence. He is clearly under pressure because sections of the Tibetan community are arguing for taking on the authorities in a much more challenging way than his." Comments Mira Sinha Bhattacharjee of the Institute of Chinese Studies in Delhi, "I have great sympathy for the Dalai Lama's predicament. I deplore the language the Chinese are using against him, but he is using harsh language too. Accusing Chinese troops of dressing up as monks and inciting violence is unreal—why would they want to do that? It does them no good." 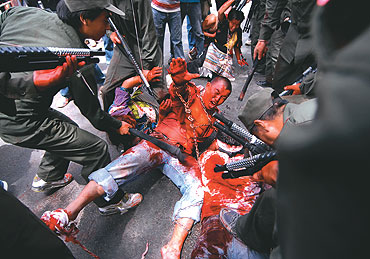 What comes through forcibly, however, while talking across the spectrum, is that the Dalai Lama (as distinct from the cause of Tibet) stands for something immensely powerful that most Indians value, even if they think, as 71 per cent of those polled by Outlook did, that his presence on Indian soil has had an adverse impact on India-China relations. Says Manoranjan Mohanty, also of the Institute of Chinese Studies, "To say the Dalai Lama is not a political person, and his activities are not political is incorrect. He has taken positions that are political—but these positions must not be suppressed. They should be stated. There has been a delicate balance in the relationship with him, which must be maintained."

In his autobiography, the Dalai Lama throws interesting light on how that delicate balance struck him, as a newly arrived political refugee in India. He was hurt and surprised, he said, when the Indian government issued a communique saying it did not recognise the Dalai Lama's government-in-exile. "I knew perfectly well that it did not support us politically, but such distancing seemed unnecessary." However, he adds, his feelings changed: "I saw, really for the first time, the true meaning of the word democracy. The Indian government vehemently opposed my point of view, but it did nothing to try and prevent me from expressing it, much less holding it."

"What is at stake here," suggests Yahuda, "is not just what the Chinese think of India but what India thinks of itself, its values, the political identity of the state." Kondapalli says that the Dalai Lama's being in India represents, among other things, "civilisational soft power. That he left China and came to India meant something". He feels that Indian civil society supports him at a subterranean level: "There could never be a demonstration against the Dalai Lama."

Is there something else at work here, beyond politics? Are people responding to the sheer goodness of the man? After all, Outlook's opinion poll shows 73 per cent of respondents seeing him as a spiritual leader, not a political one, even if he has been talking a lot of politics recently. Says sociologist Shiv Visvanathan: "He represents ethics as opposed to ideology, which is something the Left can never understand, but which appeals to all us, and not just the likes of Richard Gere."

Can it be that it would embarrass us, in our own eyes, to be embarrassed by him?

'I Don't Think Of Short Stories As A Secondary Option, Ever'